Many of us are moved by the Buddhist monks’ creation and eventual destruction of Tibetan sand paintings, or mandalas. To put so much effort into creating an artwork only to sweep it away upon completion is breathtaking. The idea is that they spring from nothing and return there. Monks fill a mandala with imagery rich with meaning. 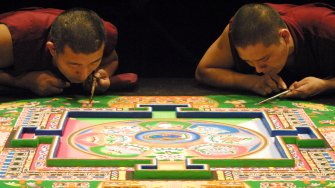 The Venerable Lama Losang Samten is one such monk. To provide Westerners an introduction to the imagery of Buddhist art, he offers an inside look at a Buddhist wheel of life. The Tibetans call it “srid pa’i ‘khor lo”; in Sanskrit, it’s bhavachakra. 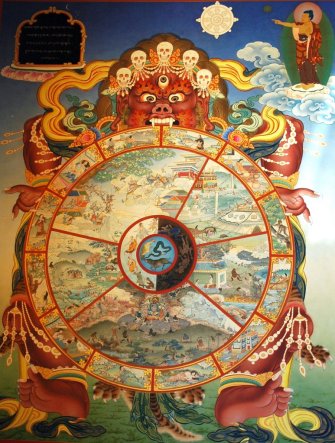 The wheel of life describes “samsara,” the repeating cycle of birth and death in which a human being is trapped until he or she achieves “nirvana,” or enlightenment.

According to Samten, the two inner rings of the wheel of life are simple enough that they’re a good place to start talking about Buddhist symbolism. 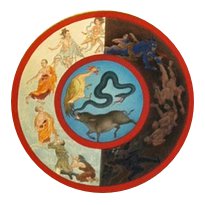 Samten makes a small mandala of these rings for our benefit, although a wheel of life would not be the subject of an actual sacred mandala. It would instead be a painting or tapestry located outside a place of worship.

At the center of a wheel of life are “the three poisons,” shown as three animals Samten describes as follows:

These descriptions of the animals are Samten’s. There are a variety of qualities ascribed to them, depending on who’s talking. Probably the most common would be:

And, of course, the animals are chasing each other. The poisons are at the center of the wheel of life because these negative attitudes are such an basic element of human existence.

Moving outward, Samten explains that the second ring is about karma derived from positive and negative actions. He says, the more of the three animals you see in this ring, the more suffering there is. When there’s less of them, things are happier.

Of course, to understand Buddhist imagery fully would take a lifetime. Or more.

From time-traveling billiard balls to information-destroying black holes, the world’s got plenty of puzzles that are hard to wrap your head around.
Up Next
Surprising Science

Been traumatized? Here’s how PTSD rewires the brain.

Learn what PTSD does to the brain, and how someone can bounce back.