Money is one of the most important concepts in human history. Love it or hate it, we’ve devoted a lot of time to it. While we use paper currencies today, some of the items used as cash throughout history have been a little less recognizable, and some choices are hilarious in hindsight.

But perhaps the strangest currency belonged to the Mayan people, who used cacao beans, the basis of chocolate, to pay their taxes and trade with one another.

In a paper published in Economic Anthropologyby Joanne Baron of the Bard Early College Network, the argument is made that depictions of cacao beans in Mayan artwork gradually shift from treating it as food with some value in bartering to treating it as money used both to shop and pay taxes.

The Maya, like every other culture, depicted everyday lives in their art. While the earliest artwork didn’t show very many cacao beans, by the 8th century it was depicted on everything. While many of the early images show it being used as food, later images show it being offered as a tribute to the nobility or used in trade.

Nearly 200 pieces of artwork depict cacao beans being used to pay tribute and taxes, which Baron argues made them a functioning currency, as there was little chance the nobility could use that many beans as anything other than money. One cited study suggests that of the 11 million beans paid as taxes per year only two million were consumed. There isn’t much else to do with nine million beans you won’t eat unless you’re using them as cash.

It is possible that the Maya just started to depict cacao beans more often in their art without having made them officially money. However, the later recorded use of cacao beans as currency by the Aztecs supports the idea that the Maya did the same.

Why did they find these beans so valuable?

Mesoamericans have been cultivating cacao since nearly 2000 BCE and the bean originally had value as the basis for a mildly alcoholic drink. Later, a frothy, nonalcoholic drink similar to hot chocolate was developed. This refreshing drink rapidly became more popular than its predecessor and was used in offerings to the Gods. Chocolate was so adored that the cacao plant had its own deity who was regularly worshipped. 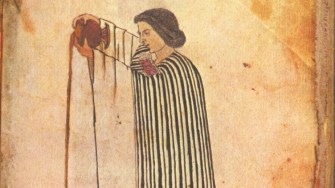 An indigenous Mexican pouring chocolate from a standing position, as depicted in the Codex Tudela.

It seems that the value of a cacao bean was always related to its intrinsic value as food, with the beans that were largest, roundest, and best colored having the highest value. However, the 16th-century naturalist Francisco Hernández informs us that while there were four kinds of beans, only the smallest type was used to make hot chocolate. The larger beans were still appraised by their ability to be made into beverages but were only used for exchange.

The Spanish conquerors of Mexico also observed that since the qualities of a good bean were determined by looks the appearance of a bad bean could be altered to fool an absent-minded customer.

The good cacao seller sells [cacao beans which are] developed, full, round—each one round; firm; each kind selected, chosen. He sells, he seeks out each kind separately. Separately, in one place, he sells the developed, the firm ones; separately the shrunken, the hollow, the broken, the shattered; separately the powdered cacao, the dust; separately the small beans like chili seeds from Tochtepec……The bad cacao seller, the bad cacao dealer, the deluder, counterfeits cacao. He sells cacao beans which are placed in [hot] ashes, toasted, made full in the fire;  he counterfeits by making the fresh cacao beans whitish; he places them in [hot] ashes—stirs them into the [hot] ashes; [then] he treats them with chalk, with chalky earth, with[wet]earth; he stirs them into[wet]earth….The whitish, the fresh cacao beans he intermixes, mingles, throws in, introduces, ruins with the shrunken, the chili-seed-like , the broken, the hollow, the tiny.

It seems that even when your money is plant-based, counterfeiting is inevitable.

What about people literally growing money on trees?

Since the cocoa tree is rather finicky—it likes to grow in soil that is constantly moist and demands 90% humidity—people couldn’t just grow money in their backyards. Only certain areas of the Maya homeland could produce the beans in large amounts. These areas were heavily cultivated for this purpose. The need to import the beans from these regions would make the beans more challenging to acquire. Which couldn’t have hurt their value. 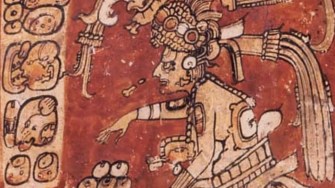 Itzamna as shown in the classic period. This God would have been receiving endless offerings of cacao beans and chocolate drinks. Unknown Maya artist – Francis Robicsek: The Maya Book of the Dead. The Ceramic Codex, University of Virginia Art Museum (1981). (Credit: Public Domain)

Did it have anything to do with the fall of the Maya?

Baron suggests a disruption of the bean supply might have helped contribute to the fall of the Maya civilization by causing an acute economic shock. Others, such as David Freidel of the Washington University anthropology department are less sure, suggesting that a single commodity of moderate value being in short supply would be unlikely to bring down a civilization.

Money only really needs to do a few things: be easy to exchange, store value well, be widely accepted, and be easily compared to other goods and services. Anything that can do those four things well makes for a decent currency. While gold and silver coins have been the go-to for most civilizations, the above examples show a little creativity can make anything money. While chocolate might not make for the best money supply, it does have an intrinsic value that many of us can appreciate.

And, be honest, wouldn’t you be happy to be paid in chocolate every once in a while?

Related
Starts With A Bang
The Universe’s most unbreakable symmetry
The combination of charge conjugation, parity, and time-reversal symmetry is known as CPT. And it must never be broken. Ever.
13.8
The weirdness of quantum mechanics forces scientists to confront philosophy
Though quantum mechanics is an incredibly successful theory, nobody knows what it means. Scientists now must confront its philosophical implications.
Neuropsych
Why is a Starbucks loyalty rewards program making customers so angry?
The rewards price to get a free cup of hot coffee at Starbucks is going up.
Empowering growth
7 essential management training topics for every team leader
From emotional intelligence to problem solving, these management training topics will set team leaders up for success.
Thinking
What if you could rewire your brain to conquer suffering? Buddhism says you can
For Buddhists, the “Four Noble Truths” offer a path to lasting happiness.
Up Next
Starts With A Bang
New Podcast: On The Limits Of Space
What’s going on at the smallest and largest scales of all? Let’s look to the absolute limits of physics.Have you ever wondered what’s out there in the Universe, on the largest […]