Democracy in America, Bernie Sanders famously noted earlier this year, is messy, as this year’s presidential election makes abundantly clear. It can be whatever voters in primaries and general elections want it to be, and the process can produce surprising results. For instance, Comorant, a small village in western Minnesota has just elected a dog as their mayor. Not a figurative dog, either. A real dog. And this will be his third term in office.

Cormorant village, which is near Pelican Rapids — and doesn’t this whole thing have a Minnesota Nice/Lake Wobegon feeling to it — has about 1,000 people. It’s part of Comorant Township, which has a human manager.

Comorant village’s mayor is named Duke, and he’s a 7-year-old white Great Pyrenees. His salary is free dog food from Tuffy’s Pet Food in neighboring Perham. Plus, he gets a hat. 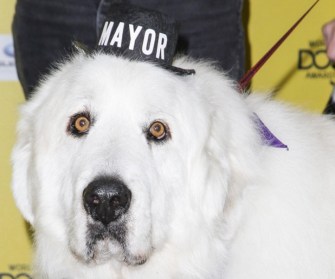 Duke was first sworn in2014, after being written-in “by accident” according to his owner, David Rick. In Comorant, every mayoral vote is a write-in and costs $1 to cast. This year Duke got nine out of 12 votes, a micro-landslide. Duke’s girlfriend Lassie got a vote, too.

Duke has turned into a publicity bonanza for Comorant, garnering the tiny burg international attention. When Duke was first elected, the villagers realized they’d stumbled onto an an incredibly effective way to put Comorant on the map, so to speak, and they’ve run with it.

The mayor first took office at the town’s annual fair. ““We’ll have him put his little paw on the bible, going to have him have the little oath,” said organizer Tammy Odegaard at the time. “Of course, he’s not going to repeat it. It would be awesome if he would bark, but who knows? He’s a country dog, so he’s not used to performing on cue.”

As for Duke himself, being mayor means lots of extra affection. 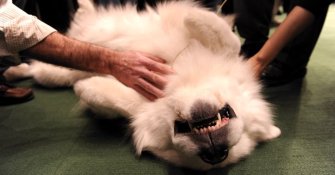 There’s also extra pampering at the groomer’s to prepare for official occasions. Think of it as payback for being trailed by local paparazzi as he scarfs a hamburger here and there on his rounds. The Daily Mail, being British, describes Hizzoner as “often seen eating hamburgers and chips in the village’s pub.” We presume they mean potato chips, but there really is a pub. Duke also has his own Facebook page.

Democracy will always be a work in progress, and sometimes it veers off in funny directions. And using the pursuit of elective office for promotional purposes may not be confined to small towns in Minnesota, either. Imagine what kind of publicity some wheeler-dealer could get just by running for president?

The rarest light elements in the Universe

Understanding the cosmic origin of all the elements heavier than hydrogen can give us a powerful window into the Universe’s past, as well as insight into our own origins. Image […]