A study finds that just 30 minutes of memory training per day, for 40 days, can reorganize your brain connectivity. 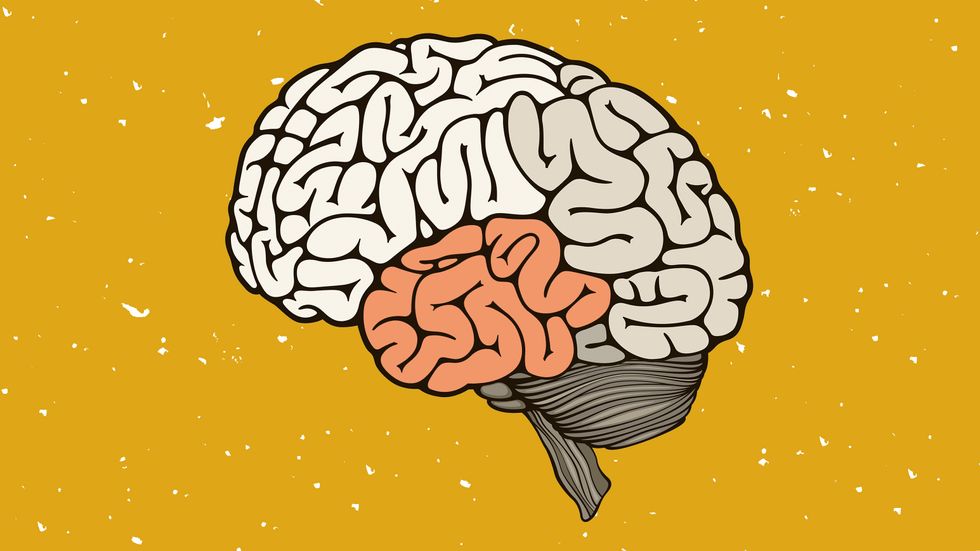 The temporal lobe (orange) is involved with smell and sound, the processing of speech and vision, and plays a key role in the formation of long-term memory.

Life would be a lot sweeter if you were a memory athlete. From the small details like where you put your keys, to the more important matters like PIN codes, trivia nights, and work-specific information recall, you would be set for success. Most of us however, are not wired that way. But don't be discouraged: thanks to neuroplasticity, anyone can transcend their fallible memory. What you're born with isn't what you're stuck with.

There are a few relatively simple things a person can do to help improve their memory function. First up, the basics: the foundation of good memory is good health. Eating and sleeping right will lead to optimal brain function, the flow-on effect of which is a better memory. Then there are more deliberate approaches like practicing mnemonics. A mnemonic device is a trick designed to make remembering things easier. So instead of remembering to buy eggs, rice, apples and dog food, it might be easier to think of READ, which stands for rice, eggs, apples, and dog food. This is the acrostic method.

Another more complicated mnemonic technique is called a mind palace, where you base a memory around visual images. Let's use the same shopping list as an example. Instead of focusing on the word ‘rice,’ this technique works by focusing on the image of rice thrown on the ground in a yard. For eggs, picture a hen pecking at the rice, followed by a nearby tree of apple blossoms, the petals falling around the hen, falling on a sleeping dog. Once the interconnected scene is created it’s a simple visual to ease your way around the halls of the grocery store with no list needed.

This technique is more formally called 'method of loci', and is believed to have been invented by the Greek poet Simonides of Ceos, who developed his muscular memory about 2,500 years ago, in really unfortunate circumstances. The roof of a banquet hall, full of people, collapsed and crushed many of them beyond recognition. Simonides had to recall where people had been sitting along the tables to confirm their deaths — hence, method of location.

The original Sherlock Holmes supposedly used the method of loci, although Sir Arthur Conan Doyle referred to it as a ‘brain attic’, as The Smithsonian reports. The great detective imagined an attic, and filled it with the things that he knew. Here in the attic, Holmes is able to search around and find anything that he might deem useful. Of course, for the updated BBC series, the ‘attic’ mentioned in the original literature was updated to a larger, grander space befitting the name of ‘mind palace.’ It includes all the places Holmes might need to remember later, including the morgue where he discussed how to survive being shot in the chest. That one came in handy.

A recent study published in Neuron has unearthed some interesting insights about the brains of competitive memorizers. The researchers invited 23 of the world's top 50 memory athletes to have their brains scanned in rest states, and while performing memory tests, and matched each champion to a control participant. "Control participants were matched for age, sex, handedness, smoking status, and IQ. Where relevant, to ensure matching with the generally high intellectual level of the memory athletes, control participants were recruited among gifted students of academic foundations and members of the high-IQ society Mensa," the study authors explain.

Anatomically, the scans showed there was no difference in brain structure or region size between the groups. Where the difference was observed was in connectivity. And what's more, after they gave the 'naive' control group training in the method of loci, their neural connectivity began to look more like that of the pros:

How should we phrase this articulately: Holy guacamole. Training in method of loci can physically change the way a person remembers. The method connects brain regions, and according to lead author Martin Dresler, this includes “regions critical for visuospatial memory and navigation, such as retrosplenial and hippocampal areas.” By training in this way, the brain can shape new pathways of recall, so that the act of remembering has multiple, speedy avenues on which to travel. The training in this study consisted of 30 minutes per day, for 40 days at home using a web-based training platform called Memocamp.

Learn about how to use the method of loci with the Med School Insiders: