We think of ourselves as rational beings, but our cognitive biases often mean our decisions are based on instincts and emotions. Here are five times cognitive biases pushed Americans to advance foreign policies that stood against the country’s best interests. 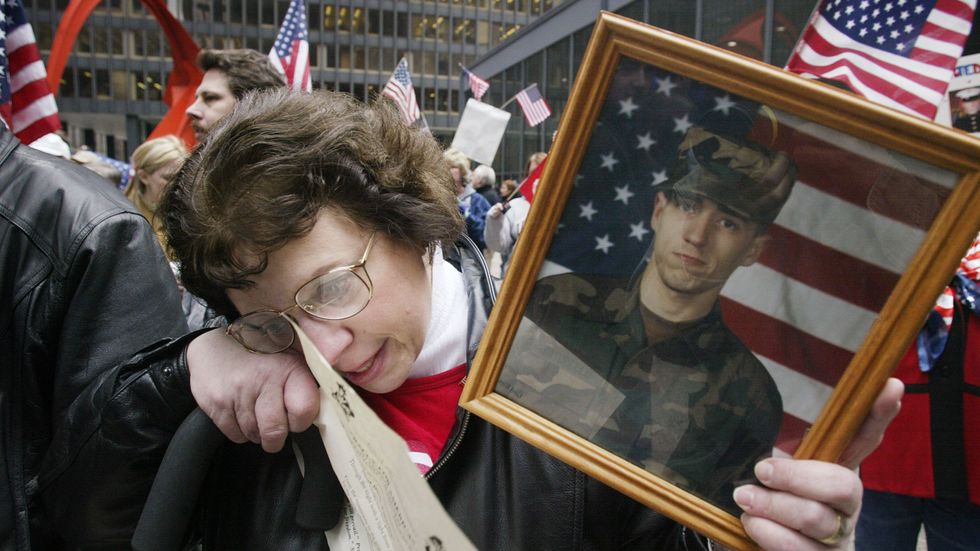 Claire Tortorello, holding a photo of her son Greg, wipes a tear from her eye following the singing of a patriotic song during a war protest March 22, 2003 in downtown Chicago, Illinois. (Photo by Scott Olson/Getty Images)

Reagan's view provides an excellent summation of democracy's appeal: the government draws its power and its course from the will of the people. However, in order for this sphere of individual influence to direct government effectively, the people must use their vote and their voice to lobby for policies based on judicious reasoning. Here, Reagan bumps up against the less-than-ideal reality of the human mind and its motivators.

Our minds come equipped with reasoning flaws called cognitive biases—effectively, mental shortcuts that lead us to make decisions based on emotions and preconceived beliefs rather than a logical, calculated understanding of a situation.

These biases can prompt voters to advocate for policies that are counterproductive to the best interests of themselves and their country. In turn, politicians are motivated to support such policies as a means to appease their constituency (to say nothing of politicians' own biases).

We perceive ourselves as rational beings that evaluate an item or experience based on an objective assessment of its worth. The sunk cost fallacy paints a different picture. Our assessments are emotionally driven, and the more time and money we invest on a poor investment or undertaking, the less likely we are to abandon it. A new study even suggests that we will continue to sink costs into other people's bad decisions.

Military strategist and historian Danny Sjursen argues that sunken cost is one of two primary reasons the United States continues its unwinnable war in Afghanistan (the other being the U.S.'s huge investment in the military–industrial complex). With 16 years passed, trillions of dollars spent, and thousands of American lives lost, there is still no end in sight, yet a large portion of the American electorate believe we have committed too much to walk away.

A 2017 poll supports Sjursen's evaluation. Forty percent of Americans surveyed said they believe the U.S. needs a more aggressive strategy in Afghanistan, even if that means deploying more troops. “So, what do we have now?" Sjursen told Big Think. “We have the inertia of a military-industrial complex, which makes a lot of money for a lot of people and keeps a lot of people employed, on one end, and then we have the sunken cost fallacy on the other side, where we say, 'We've committed so much we can't possibly leave.' No president wants to be the president that 'lost the War on Terror.'"

We hate to lose things because losses hurt us roughly twice as much as equal gains give us pleasure. This fear is known as loss aversion. It's the reason why home sellers refuse to sell for less than what they paid, even if the asking price is unrealistic in the current market (also see the endowment effect.)

US President Donald Trump has initiated a global trade war with China to rescue the industries of yesteryear. (Photo: NICOLAS ASFOURI/AFP/Getty Images)

Writing for The New York Times, Neil Irwin argues that loss aversion explains President Trump's intense focus on U.S. job losses in industries like coal and steelmaking. Trump's supporters feel these losses negatively affect America to a greater extent than the equal, if not greater, gains the economy has made in industries such as aerospace, agriculture, and technology. To mollify his base and retain their support, Trump has initiated a global trade war with heavy tariffs on steel and aluminum, even though this approach will be unlikely to show results.

Related to loss aversion is the status quo bias. This bias pushes us to keep things the same, especially when we perceive the current state of affairs as beneficial. Any change to the status quo is perceived as a loss, and losses hurt.

Government subsidies are sometimes used as a means to placate our status quo bias. Typically, subsidies are used to maintain prices and ensure the availability of necessary goods, but occasionally lobbyists and voters advocate for government subsidies to keep local industries viable when they are no longer competitive in the marketplace.

U.S. cotton is one such industry. The government has heavily subsidized cotton farmers in the past—sometimes up to half or more of their revenue—resulting in massive distortions to global markets. In 2005, Brazil argued that these subsidies artificially depressed world cotton prices, reducing the income for world cotton producers. Brazil's victory over the U.S. cost American taxpayers $750 million dollars.

Confirmation bias occurs when we seek information that supports our pre-existing beliefs, while either ignoring counterfactuals or interpreting them less favorably. Walt Slocombe, senior advisor to the Coalition Provisional Authority, believes confirmation bias resulted in the George W. Bush administration's decision to invade Iraq in 2003. “And I think the hardest problem—based on the Silberma-Robb analysis of the intelligence—was powerful confirmation bias," Slocombe told ForeignPolicy.com. “I don't think anybody willfully lied; I don't think anybody was told to produce a result. But people heard what they wanted to hear. And that is, there was a reasonable hypothesis that Saddam still had substantial WMD and WMD programs."

As the facts have become clear, and the confirmation bias harder to sustain, the popularity of the Iraq War has dropped precipitously. In March of 2003, only 23 percent of those polled by Gallup thought the war was a mistake when asked the question: “In view of the developments since we first sent our troops to Iraq, do you think the United States made a mistake in sending troops to Iraq?" By June 2015, that number was up to 51 percent. Even so, 46 percent still believe it was not a mistake.

The availability heuristic is the reason most of us don't calculate risk effectively. This bias leads people to judge the chance of an event based on information and examples that come readily to mind, and it has helped fuel America's War on Terror.

Terrorist attacks are tragic, random, and violent incidents that receive wall-to-wall news coverage. Horrific images combined with constant reminders in the media make them easy for our minds to recall in vivid detail. Yet, they remain incredibly rare. “The terrorist threat in the United States is almost entirely homegrown, as no foreign terrorist organization has successfully directed and orchestrated an attack in the United States since 9/11," Albert Ford, a program associate with the International Security and Fellows programs at New America, told Politifact.

Worldwide, the majority of fatalities resulting from Islamic terrorist attacks occur in Muslim majority countries—such as Iraq, Afghanistan, and Syria—and terrorism is a paltry amount of the total number of worldwide deaths (13,186 in 2010) compared to the millions of people who die annually from causes such as suicide, air pollution, and child undernutrition.

Although terrorist attacks are rare, larger percentages of Americans worry they will be victims of terrorism, and Americans are more likely to believe a terrorist attack will occur in the days after an attack than at other times. A recent study even suggests that a major factor in the surge of support for Trump during the 2016 campaign stemmed from his hardline stance against “radical Islamic terrorism."

To appease this base, Trump signed an executive order banning travel from five Muslim-majority countries. The stated objective was to protect the United States from foreign terrorists, however, many have argued the ban will ultimately hurt industries that rely on immigration, such as healthcare and technology.

In the driver's seat

Cognitive biases arguably aren't flaws at all, but rather adaptive traits evolved in humans to reward fast thinking. While fast thinking certainly has its advantages in areas of modern life, government policy is not one of them.

While we can't remove these biases from our mental makeup, we can be aware of them and limit their influence on our decision making and the policies we advocate for. In doing so, we can use the power of our voices and votes to steer our leaders to set a course that benefits American people and our country's status on the world stage.