Electrical brain stimulation can reduce violent impulses by more than 50%

In a fascinating and somewhat unexpected result, mild electrical stimulation of the prefrontal cortex part of the brain can reduce violent urges and even raise moral awareness. 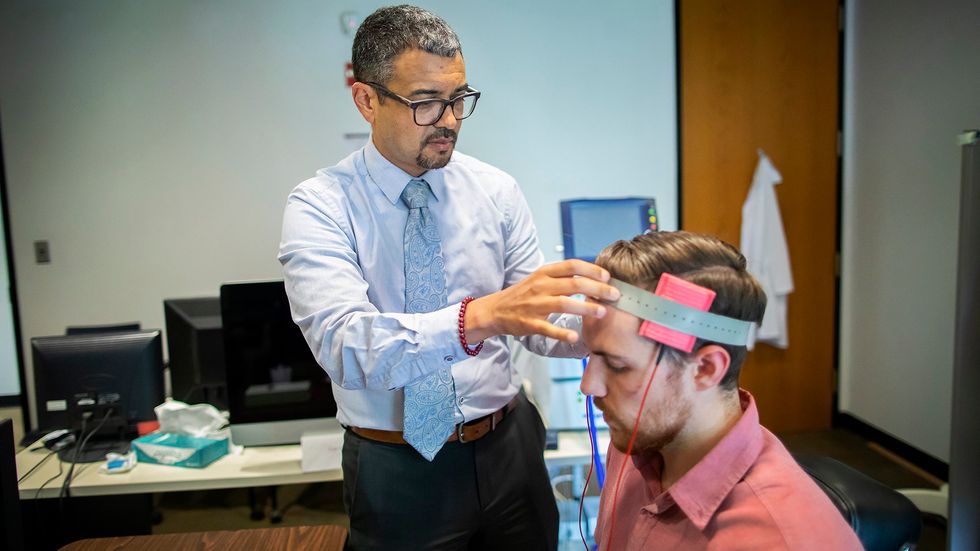 In potentially groundbreaking research, the Journal of Neuroscience published today the results of research at the University of Pennsylvania and the Nanyang Technological University (NTU) in Singapore showing a possible breakthrough in humans who are likely to violently assault others. It also improves what the researchers refer to as "moral awareness"—that is, the ability to decide if an act is morally reprehensible.

The methodology? In a double-blind experiment, they enlisted 86 healthy adults and performed 20 minutes of brain stimulation in the prefrontal cortex on half of them. Then, they asked the group to read two hypothetical scenarios: One involved a violent physical assault (one man smashed a bottle over another's head for hitting on his girlfriend), and the other, a sexual assault (an evening involving intimate foreplay that leads to date rape).

Immediately afterward, the participants were asked if they might behave as the protagonist did in the stories, on a rating scale.

In those who had the transcranial direct current stimulation, the likelihood of carrying out the physical and sexual assaults was 47% and 70% lower respectively than those who did not.

Transcranial direct current stimulation, or tDCS, is a 2 milliAmp current to the prefrontal cortex of the brain, which in this case lasted for 20 minutes.

“When most people think of crime they think bad neighborhoods, poverty, discrimination, and those are all correct,” said study co-author Adrian Raine of the University of Pennsylvania. “But we also believe that there’s a biological contribution to crime which has been seriously neglected in the past. What this shows is that there could be a new, different approach to try and reduce crime and violence in society.”

“Much of the focus in understanding causes of crime has been on social causation,” said co-author Adrian Raine in a statement. “That’s important, but research from brain imaging and genetics has also shown that half of the variance in violence can be chalked up to biological factors. We’re trying to find benign biological interventions that society will accept, and transcranial direct-current stimulation is minimal risk. This isn’t a frontal lobotomy.”

It's also not the same—nor nearly as harsh—as electroconvulsive therapy, a.k.a. electroshock therapy.

The study authors cautioned that these are early findings, and more research will be done and the results will have to be replicated.

Still, this is very promising.