A study published in Applied Cognitive Psychology suggests that believers struggle to understand the physical world. 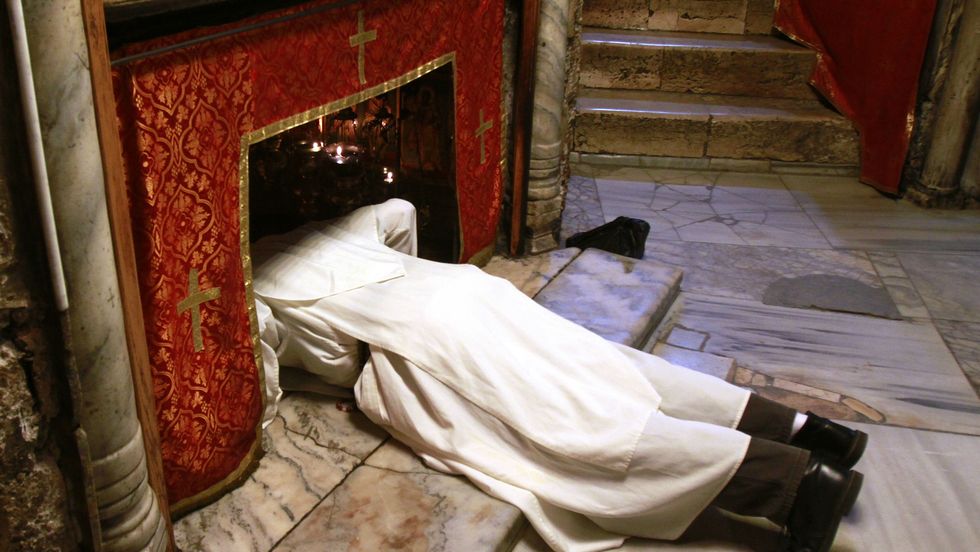 A Christian worshiper prays in the Grotto at the Church of the Nativity, revered as the site of Jesus Christ's birth. (Photo: MUSA AL-SHAER/AFP/Getty Images)

The number of people who claim to have “No religious belief” is fast-growing in America and Europe, but the number expressing religious belief is growing faster. What’s more, the irreligious category includes fans of astrology, tarot reading or the paranormal. The tenacity of supernatural belief has prompted scientists to try understand its basis, and so far their answers have mostly implied a defect in believers: the religious have a bias in their visual attention; people with supernatural belief fall for bullshit statements. Now, in a study in Applied Cognitive Psychology, comes the suggestion that believers struggle to understand the physical world.

Marjaana Lindeman and Annika Svedholm-Häkkinen asked 258 Finnish participants to report their religious beliefs – that “there exists an all-powerful, all-knowing, loving God” – as well as beliefs in paranormal phenomena like telepathy and precognition. Then they completed a series of online tests and questionnaires tapping their demographics and psychological traits. Consistent with past research, Lindeman and Svedholm-Häkkinen found that believers were more likely to be women, intuitive thinkers, and less likely to think analytically.

The novel step was investigating the participants’ capabilities related to understanding the physical world. Although an aggregate of the participants’ school grades in physics and maths was unrelated to their supernatural beliefs, scores on another factor the researchers termed “physical capability” was inversely correlated with strength of belief in the supernatural.

“Physical capability” was based on a host of measures: the ability to correctly match rotated images together, to solve mechanical and physics-based problems, scientific knowledge, and the tendency to attribute thought to entities we don’t normally see as thinking, termed mentality (“henkinen” in Finnish – a greater tendency meant lower physical capability). I’ll talk more about this last measure later.

The authors interpreted their findings as saying that non-materialists focus more on thought, and less on the physical world. They added that “supernatural beliefs may thus reflect a broad, hyper-mentalistic cognitive phenotype, opposite to the hyper-mechanistic phenotype. Extreme forms of hyper-mechanistic phenotype can be found among individuals with Autism spectrum disorder.”

This kind of autism-related claim is a tempting thing to hang a headline on. We didn’t because I have some reservations with these conclusions.

First, the analogy is imperfect, as people can move between atheist and believer several times in their life, prompted by reflection, experience and conversation. This has no analogue in Autism Spectrum Disorder. In principle, there could exist a subset of believers whose cognitive phenotype traps them forever in supernatural beliefs, but that standard of evidence isn’t close to being met.

But my second and main concern is the fact that the physical capability factor included, and appears to be substantially driven by, the measure of mentality/henkinen.

Participants were asked to rate concepts like “consciousness” or “clock” as more or less mental, defined here as “anything that has some kind of spirit, or something which itself is mental”. When participants assigned any mentality to items like flowers, rocks, and wind, this contributed to their receiving a poorer “physical capability” factor, just as occurred when they mismatched two images on the mental rotation test.

But these aren’t the same sorts of things. Even putting aside that some botanists posit plant intelligence, thinking that rocks are mental is not a factual mistake, it’s a belief, just like a belief in God or astrology (and it’s a belief, lest we forget, which has a philosophical pedigree and that may be enjoying a resurgence.)

In an essay I began reading today by the poet Robert Bringhurst, he states – in my opinion without intending metaphor – that “if a tree falls in the forest, all the other trees are there to hear it.” Now, you may disagree with Bringhurst, but you can’t simply correct him.

A tendency to see mentality everywhere is less like a slip-up on a mechanics test, much more like a belief in God; indeed, much religious belief is grounded on the fact that there is a logos, holy spirit, or breath of life underpinning all existence.

Unsurprisingly, mentality correlated more strongly with paranormal (.60) and religious (.45) beliefs, than with mechanical ability (-.29 and -.24) or mental rotation (-.13, -.12). So when mentality – arguably a measure of belief rather than of physical understanding – is included as part of a physical capability factor that supposedly explains beliefs, well it feels like a bait-and-switch.

I should note that I contacted one of the authors, who told me that the “physical capability” / Supernatural belief association held in unpublished analyses that didn’t include mentality, although it did become weaker. So my criticism applies to the published version of the work that we have available, and further work published may escape this criticism entirely. It’s important for us to understand the presence and absence of supernatural belief, and the idea of a continuum of focus from physical to mental is an intellectually arresting one. But personally, I would want to see more data before drawing conclusions as to the merit of that idea.