Is death still frightening if you believe the self is an illusion? An astonishing study of Tibetan Buddhists

Imagining ourselves as no longer existing is, for most of us, terrifying. Buddhism may offer some reassurance. 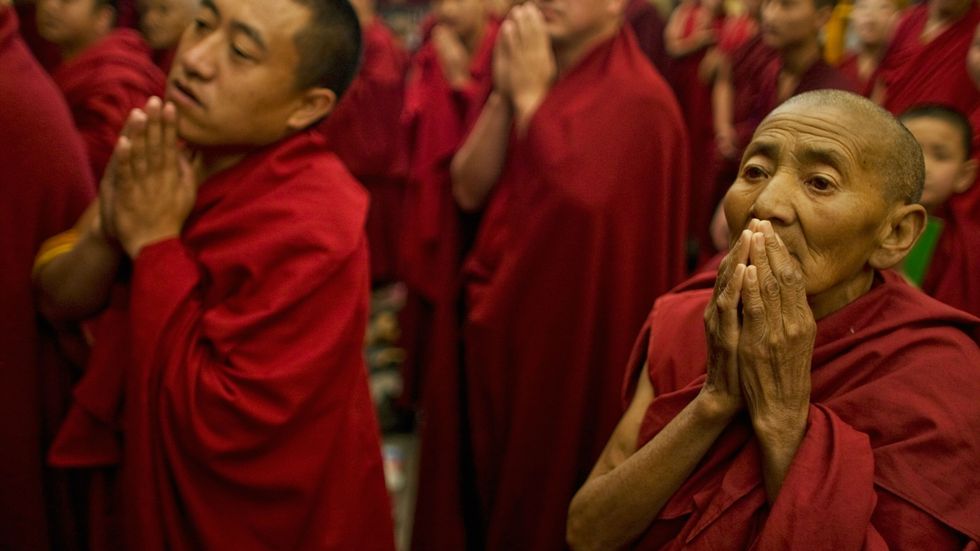 Imagining ourselves as no longer existing is, for most of us, terrifying. Buddhism may offer some reassurance. A central tenet of the religion is that all is impermanent and the self is actually an illusion. If there is no self, then why fear the end of the self?

To find out if the logic of the Buddhist perspective eliminates existential fear, Shaun Nichols at the University of Arizona and his colleagues surveyed hundreds of monastic Tibetan Buddhists (monks-in-training) in exile in India, as well as lay Tibetans, Tibetan Buddhists from Bhutan, Indian Hindus and American Christians and atheists.

The US participants were recruited online, whereas the monastic Tibetan Buddhists and other groups were given paper surveys to complete, translated by fluent bilinguals into the appropriate language. The hundreds of monastic Tibetan Buddhists who took part were from monasteries in Byalkuppe and Mundhod in India. The researchers also surveyed 30 Buddhist scholars about how devoted Buddhists ought to answer the different survey questions.

Two of the surveys addressed the permanence of the self. As expected, the monastic Buddhists showed the least belief in the continuity of the self – they thought they would be different in personality, beliefs, ambitions and other characteristics in the future. In contrast, the Americans, whether religious or not, showed the strongest belief in the continuity of the self (the other groups, including everyday, non-devout Tibetans, scored mid-way between these two extremes). Similar patterns emerged for beliefs about the existence of a “core self” that persists over time, with the monastic Buddhists again showing the least belief in the self.

Would the monastic Buddhists’ scepticism about the self have a bearing on their fear of death? More than the other groups, they said that they used the no-self doctrine to cope with the prospect of death, as the Buddhists scholars said they ought to do.

Yet, when the researchers surveyed their participants about their fear of death and especially their fear of self-annihilation (gauged by agreement or not with items like “Dying one year from now frightens me because of the loss and destruction of the self / destruction of my personality”), to the researchers’ surprise they found that this fear was most intense among the monastic Buddhists. This was opposite to how they ought to have responded according to the Buddhist scholars. Note, the Buddhists believed just as strongly in an after-life (though not, of course, for their current “self”), so this could not explain their more intense fear compared with the other groups.

Next, the researchers surveyed more participants from the same groups about how much they would be willing to sacrifice years of their own life to extend the life of another person (for instance, in the most extreme version of the thought experiment, they were asked to imagine they could take a pill to extend their own life by six months or give the pill to a stranger, similar to them, for whom the pill would add an additional five years to their life). The monastic Buddhists were the least willing to make this kind of sacrifice – in fact, over 72 per cent preferred to keep the pill for themselves in the above scenario, compared with 31.2 per cent of non-religious Americans.

Writing on Twitter, co-author Nina Strohminger at the University of Pennsylvania said that these findings were “probably the most bizarre and unexpected of her career“.

The researchers believe the paradox they have uncovered, between the Buddhists’ explicit beliefs and their fears, may be explicable by the fact that, despite their training and explicit claims, the monastic Buddhists still have a powerful sense of a continuous identity that stretches from the past and into the future. It is not easy to defy the illusion of the self even if you are taught to do so. This would seem to be borne out by notable Buddhist autobiographies that betray a keen experience of a continuous self. At the same time, Buddhists may succeed well in truly believing that the self ends at death (unlike other religious groups that preach that the soul is eternal), and this could account for the Buddhists’ exaggerated fear of self-annihilation at death. One caveat to the findings highlighted by the researchers is that, although their monastic Buddhist participants meditated every day,  none of them were highly experienced, long-term meditators with many years of practice. Meditation is seen as one way to eliminate belief in a permanent self, so it will be interesting to repeat the research, not only with other Buddhist denominations, but specifically with highly experienced, expert Buddhist meditators, to see if they too would fear self-annihilation.