How To Think Like a Philosopher (with Daniel Dennett)

Daniel Dennett, one of the best-known living philosophers and a professor at Tufts University, feels it’s time to unmask the philosopher’s art and make thought experimentation accessible to a wider audience. 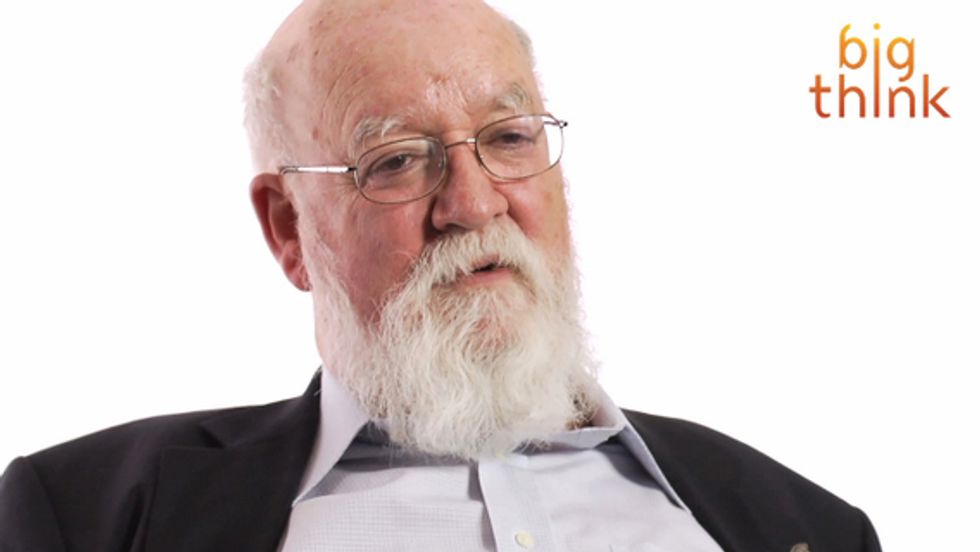 The Puritan strain in US history and culture still lingers, and one of its legacies is a relentless pragmatism. The same culture that produces metaphysical dreamers like Walt Whitman also, always wants to “cut through the bulls#*t”, to get to the bottom line.

Unlike, say, France, where staring into space while smoking filterless Gauloises never seems to go out of fashion, where Foucault could become a cultural hero for tracing with unprecedented precision the impossibility of ever quite putting your finger on anything, Americans tend to think of philosophers (and academics more generally) as, well, not especially useful members of society. One telling piece of soft evidence: Google searches, as you probably know, are localized; I just Googled “philosophy majors” from my New York City desk and “philosophy majors pretentious” popped up as the first suggested phrase.

I’m generalizing of course, and America is nothing if not a land of contradictions. Ask any law school admissions officer which undergrad majors are the best preparation for becoming a lawyer; philosophy is sure to be among the top five. MBA programs and corporate recruiters, too, are aware of the value of the trained philosopher’s mind. But how exactly do philosophers think? Obviously there are profound differences between Wittgenstein’s mind, for example, and Descartes’. But what they have in common is the ability to entertain a “what if” scenario and follow it down multiple causal pathways: What if a person were born with no senses at all? What would her “mind” consist of? Could she be said to have a “self”? Okay – let’s approach it differently. What if she had only the sense of touch? The popular term for this kind of thing is a “thought experiment,” and the years of thought experimentation are arguably what make a trained philosophical mind especially good at thinking things through.

Video: How To Think Like a Philosopher, with Daniel Dennett | Big Think Mentor

Daniel Dennett, one of the best-known living philosophers and a professor at Tufts University, feels it’s time to unmask the philosopher’s art and make thought experimentation accessible to a wider audience. His latest book, Intuition Pumps and Other Tools for Thinking, is a journey into the labyrinth of mind games Dennett and his colleagues, past and present, like to play. These “intuition pumps” as he calls them, are stories and scenarios that invite you to “twiddle the knobs” – changing this or that detail to raise new questions or lead to different conclusions.

For the more utilitarian-minded, these are mental practices that, over time, will improve your ability to focus and think both rationally and creatively.

How to Think Like a Philosopher, Dennett’s six part video workshop for Big Think Mentor, takes you on a guided tour through many of Dennett’s favorite “tools for thinking.” Along the way, he teaches you:

The value of “intuition pumps” and how to use them.

How to spot the weaknesses in an argument

How to recognize common rhetorical tricks for manufacturing consent.

How to “twiddle the knobs” of thought, exploring alternatives and the conclusions they lead to.