Could you become a high-conflict person’s (HCP’s) Target of Blame? If you’re not watchful and careful, yes. HCPs generally pick on people they are close to or people in authority positions. These close personal or supervisory relationships usually involve the types of people we’re inclined to invite into our lives, often without knowing much about them.

Avoiding and deflecting high-conflict behavior is like avoiding illness. You can protect yourself from becoming someone’s Target of Blame by vaccinating yourself with knowledge of the personality patterns of high-conflict people. I call this personalityawareness. 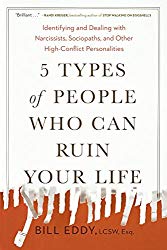 In fact, with personality awareness you will be more confident in dealing with people, because you will know how to recognize the warning signs of dangerous personality patterns before they do you much harm.

You need to have personality awareness to protect yourself from and deal with potentially high-conflict people on a regular basis without getting hooked by them. I’ll show you how to develop this with some simple assessments you can use when new people come into your life and with tools for when you think you may be dealing with an HCP. As members of society, it will help us all if we can share this knowledge and limit the harm that high-conflict people often do by gaining the trust of those who are uninformed or simply naive.

Four Things You Need to Know About HCPs

First, people with one of the five personality disorders (narcissists, borderline HCPs, sociopaths, histrionics and paranoiacs) belong to all economic, social, political, and ethnic groups. You can’t tell an HCP by their background.

For example, you can’t identify an HCP by their profession or by how much other people trust them. In fact, highly admired leaders and members of the helping professions (teachers, physicians, clergy, therapists, nurses, etc.), may be slightly more likely to have personality disorders than people in other lines of work, because of an attraction to the intimate relationships and authority positions in these professions.

Second, studies suggest that the percentage of HCPs is increasing. This means that your risk of being targeted is growing as well.

Third, because people with high-conflict personalities think and act differently from what an ordinary person would do or expect in a conflict, your methods for managing them must be differentfrom how you would normally resolve conflicts.

Fourth, HCPs aren’t inherently evil. We shouldn’t judge them as bad human beings or try to push them out of human society. Many were born with their personality disorders, or developed them because they were seriously abused or indulged in their early lives. Some high-conflict people, with the right interventions, can be redirected into getting help and leading productive, more satisfying lives. But for the ones who can’t be helped, we need to work together to limit their damage.

Personality awareness has suddenly become so important to avoiding becoming a Target of Blame because of four big, recent changes in our world, which make us more vulnerable and less aware of who we’re dealing with:

Combine these four very recent cultural changes with centuries-old human nature, and it’s a potentially dangerous mix. Why? Because certain aspects of human nature set us up for easy manipulation and increasing vulnerability to becoming Targets of Blame:

These are all normal human traits. There’s nothing wrong with having these responses. In fact, they will work 90 percent of the time. You just need to learn when to override them. Otherwise, you risk becoming a Target of Blame. That’s what this book is all about: learning to recognize warning signs that most people ignore or don’t see—and then overriding your natural responses with actions based on your newfound wisdom about HCPs.

‘I believe because it is absurd’: Christianity’s first meme

Is it ever okay to believe in things we consider to be impossible or extremely improbable?