There are so many disturbing aspects of the Cliven Bundy story, it’s hard to decide which is worst. But for me what takes the cake is Mr. Bundy’s self-perception as a man who is not, despite all of his racist beliefs, a racist. Hereis what he said:

“Maybe I sinned, and maybe I need to ask forgiveness, and maybe I don’t know what I actually said, but when you talk about prejudice, we’re talking about not being able to exercise what we think. … If I say Negro or black boy or slave, if those people cannot take those kind of words and not be (offended), then Martin Luther King hasn’t got his job done yet,” he told anchor Chris Cuomo on Friday, adding, “We need to get over this prejudice stuff.”

The risk of huge news stories like the Bundy report or the comments and subsequent punishment of the Clippers’ owner, Donald Sterling, is that we outsource all of our racism on a few caricatures of prejudice.

As a New York Times “Upfront” piece shows today, Mr. Sterling and Mr. Bundy may only be the ugliest and most notorious extremities of racism in the United States. The real tragedy is the pervasiveness of racism in the general population. Here is some of the data: 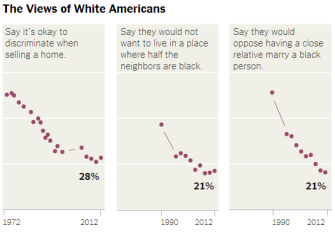 – 45 percent of white Americans say blacks often lack the willpower to pull themselves out of poverty.

Related
Starts With A Bang
The galaxy cluster that broke modified gravity
19 years ago, the Bullet Cluster provided an empirical proof for dark matter. Even today, modified gravity still can’t explain it.
Neuropsych
Psychology studies that go viral are likelier to be bogus
A new 20-year analysis of over 14,000 psychology studies finds that a study’s media coverage is negatively linked to its replicability.
The Future
How a device transmits radio waves with almost no power
Apart from the energy needed to flip the switch, no other energy is needed to transmit the information.
The Present
Radical idea: Redraw the U.S. map as a nation of city-states
While cities drive national economic growth, their political geography means they cannot effectively deal with inequality, poverty, and other socioeconomic problems.
The Learning Curve
Why do high IQ people stagnate in their careers? Emotional intelligence
Research suggests that emotional intelligence is more vital for success than IQ.
Up Next
Culture & Religion
NBC Needs Help Finding The Next Great American Sitcom
Following in Amazon’s footsteps, the network is launching a Web site where the public can submit pitches for future comedy shows. The best will be filmed as pilot episodes for possible future series.