I was very surprised to see the following headline earlier today on a parenting website of all places: Just keep your promises: Going above and beyond does not pay off. The article described a study published this week in Social Psychological and Personality Science in which the study authors conclude (emphasis mine):

“The results of our experiments suggest that it is wise to invest effort in keeping a promise because  breaking it can be costly, but it may be unwise to invest additional effort to exceed one’s promises. When companies, friends, or coworkers put forth the effort to keep a promise, their effort is likely to be rewarded. But when they expend extra effort in order to exceed those promises, their effort appears likely to be overlooked.“

I decided to take a look at the evidence for this rather nihilistic conclusion. The study involved a series of small experiments. In the first two experiments, students had to imagine that a friend had promised to give them feedback on a paper. The researchers found that participants who imagined their friend had exceeded their expectations felt that (on a scale of one to eleven) their imaginary friend was only slightly more generous than an imaginary friend who only kept their hypothetical promise. I don’t know about you, but put this way, these results don’t sound quite so surprising to me. 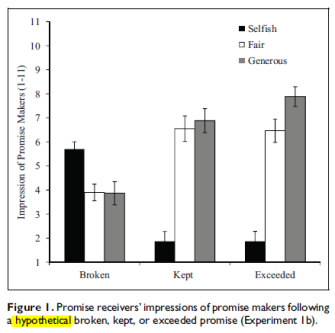 Moving on, in the next pair of experiments, a similar procedure was followed except instead of imagining, participants had to remember a time when a friend of theirs kept, broke or exceeded a promise. Like before, there was little difference in the participants feelings towards those friends that kept their promises and those friends that exceeded their expectations. I can’t help but feel this says more about the vague and arbitrary nature of the experiment than how people might feel in real life, following an occasion when someone goes out of their way to actually do something nice for them.

In a further pair of experiments, the researchers took the abstract and arbitrary nature of the experiment to a whole new level. Half of the participants were asked to complete a “puzzle” – the kind of puzzle that you would only ever find in a psychology experiment. The “puzzle” involved “counting zeros in a table of numbers”. In a scene which couldn’t be further from a real life social situation if it had been written by the script-writers of LOST, the other half of the participants – the “promise makers”, were told to walk into the room and promise to help the participants by “solving” ten tables (following a script written by the experimenter), before promptly leaving. While the “promise makers” completed the tables elsewhere, the original participants were made to fill out a personality questionnaire. If you’ve ever had the displeasure of filling one of these out yourself you’ll know that this is one of the few tasks that could possibly feel more arbitrary than “counting zeros in a table of numbers”, something the experimenters don’t seem to have considered. It’s hardly a great favour to promise to help someone by helping them on an arbitrary task so that they can complete an even more arbitrary task. Finally, the experimenters returned either 5, 10, or 15 of the tables to the participants (who presumably were supposed to feel supremely grateful for this small amount of contrived help in a pointless task). The experimenters then asked the participants to rate how they felt towards the “promise makers”. In what seems to me to be a considerably unsurprising result, there was little difference in how the participants felt towards the promise makers who either kept their promise or exceeded their promise by counting the zeros in 5 extra tables.

To the researchers credit – this was a rather original idea, this was the first time researchers have investigated what happens when someone exceeds a promise. Unfortunately, I can’t help but feel they didn’t achieve what they set out to do. Instead, I have a feeling what they actually measured was how people respond on a numerical scale – in response to various imagined, abstract, irrelevant and plainly bizarre tasks – and found the shock horror result that their subjects were profoundly nonplussed and probably just wanted to go home and do something less mundane.

The researchers also seem to have failed to take into account what we know about game theory. As demonstrated by the famous case of the Prisoner’s Dilemma, we have long known that individuals will cooperate well over a period of time if there are rewards that are mutually beneficial – but players will act selfishly if the relationship has a limited time period – as is the case in this experiment, which is yet another reason why these results might not generalise into real relationships in the real world.

After reading this paper, I couldn’t help but wonder how any self-respecting journalist writing for a parenting publication could read this paper and come to the conclusion that “going above and beyond does not pay off” – and then I spotted it. The clue was in the byline: “By Staff Reporter” and the answer was in the small-grey-print: “Provided by SAGE Publications”. This wasn’t a news article at all. This was a fluff piece by a PR person working for a publisher to promote a paper which in reality found very little. In my last post we looked at 12 ways to spot bad science – why not see if you can spot which of the 12 boxes this study ticks (I counted a definite five).

When we are more focused on the good things we enjoy in life, we have more to live for.
Up Next
Culture & Religion

Can Machines Be Taught to Have a Conscience?

The US Navy is funding a research effort to equip robots with the decision making tools necessary to make split-second decisions between right and wrong.