Can’t go over it.

Can’t go under it.

Can’t go around it.

Gotta go through it.

Many generations will remember with affection growing up singing the song above. This generation will be the first to have grown up in a world where keygens, crackers, tunnels and firewalls are household playground words. This generation can go over, can go under and can go around – as well as go through. In the words of Rage Against The Machine, “we don’t need the key we’ll break in”.

In generations past the only people who needed to be able to break locks were cops, locksmiths and criminals; today this is no longer the case. I was reminded of this recently when I discovered BBC Future, the new fantastic science and technology news blog by the BBC, with heavyweight contributors including Ed Yong and Tom Stafford. Unfortunately however, due to the backwards logic of British Broadcasting Corporation (BBC) bureaucrats, the blog can be accessed from every single country in the world except for the UK. Yes, you read that right. British citizens – including BBC licence payers who cough up the equivalent of $225 each year for the privilege of being able to legally turn on their TV are the only people on the planet who can’t read the BBC Future blog.

…as the folks on the BBC future Twitter will cheerfully tell you:

If you’ve ever experienced working in another county and falling in to an internet igloo where the news at home is off limits due to firewalls erected by national broadcasters like the Beeb, you’ll know what I’m talking about. If you’ve ever been hit by a “content not available in your region” message after following an interesting link you’ve been sent online you’ll also know the frustration. If you live in one of the majority of countries in the world that doesn’t have plenty of international licensing agreements signed by the big media corporations you will likely not have access rights to free or fairly priced digital media through providers such as BBC iPlayer, Hulu, Netflix, Spotify and LastFM. If you are a student in a part of the world that happens to have publishers that have signed unfair licencing agreements you could be paying hundreds of dollars more for your medical textbooks. If you want to rent your textbooks from online book stores, access will most likely be completely prohibited in your country. If you have ever taken a course on a platform such as Coursera you might have spotted lengthy discussions on the completely differing prices and availability for the same book around the world.

You may even be one of the poor souls trapped behind a restrictive government, company or even university – yes university – firewall, many of which take the blunderbuss approach to blocking content such as words related to drugs. Sucks to be you psychopharmacology students – or readers of this blog. The standard is increasingly moving away from political censorship and censorship of discussion of naughty things like sex and drugs towards censorship based on copyright quarrels – which can quite easily be conjured up to be one and the same. If you happen to live in Germany for example, you will have been deprived of most of the fantastic footage of the recent Russian asteroid due to a bustup between Google and a German performance rights organisation. 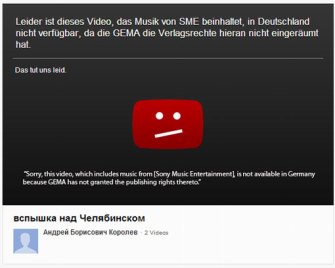 Why on earth should a German performance rights organisation have anything to do with footage of a lump of rock flying into Russia from outer space you might rightly ask? Well the reason is that many of the drivers who happened to catch dashboard-cam videos happened to have the radio on at the same time. Currently 61.5% of the top 1000 videos on YouTube are unavailable to Germans because they contain content that despotic algorithms have determined might be subject to copyright. This is due to the fact that Germany does not have a legal ‘fair use’ provision to allow use of copyrighted material in new works – and whichever way you look at it, this inevitably covers a great proportion of the legitimate ‘original’ material out there. Unfortunately, though most of the rest of the world does have a ‘fair use’ provision, the computer algorithms that automatically detect and block copyrighted content don’t have the ability to understand the legally complex concept of fair use. As such, approximately one in five of the top 1000 videos on Youtube are blocked in one or more countries in the rest of the world outside Germany as the following interactive infographic shows. Click to see an interactive infographic illustrating the astonishing amount of videos that are blocked on Youtube in various parts of the world and compare this with the fraction of these which appear to be actual or potential rights violations. 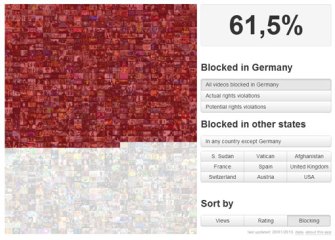 As of tomorrow, most internet users in the US (customers of AT&T, Cablevision, Comcast, Time Warner, and Verizon) will become subject to a new anti-pirating measure which will throttle internet speeds and force users to sit through online “courses” on piracy if copyright violation is suspected.

But, of course there is another way…

Legal notice: These technologies should not be used to engage in piracy or other illegal activities. Always read the terms of service, always check the laws in your jurisdiction. It may be against the terms of service of a content provider to access their content inside or outside of a certain location.

Go Over It: The Proxy

The simplest way to get over a firewall is to route your connection through one of a host of commercial companies offering to route your connection for the small price of showing you some ads in a sidebar. This will often be all you need to enable you to get your reading done. Unfortunately, many webmasters take the crafty step of banning a list of known proxy URL’s.

If your webmaster is blocking known proxies you can stay one step ahead by adding yourself to a mailer which regularly sends out new URL’s. If you have a home computer that gets you where you want to go, you can always create an access point there and route your connection through it with a proxy.

Go Under it: The Onion

TOR is perhaps the greatest free proxy network in the world, your data is bounced between a global network of users, shedding off any trace of where you are viewing from and stopping prying eyes monitoring what you are looking at. TOR is used by everyone from the privacy conscious to whistleblowers and dissidents. It gained prominence for helping surfers slip through the Great Firewall of China and enabling the organisation of the string of uprisings in the middle east.

Go Around it: The Private VPN

If you’re trying to get in to an access point in a specific location, you may find that public proxies and TOR prove to be a bit too much of a lucky dip. In this instance there are a host of private companies offering to tunnel your internet through their servers in whatever part of the world you choose, for a small price. This will enable you to sample such digital delights as the local online broadcasting of your selected country. It will also prevent your connection from being easily monitored be it by the proprietor of the café where you are accessing public wifi, or by your service provider or government. Torrent Freak have curated a list of VPN providers who have vowed to take anonymity seriously. If you don’t want to cough up for a private VPN you can try one of a range of emerging browser based P2P based VPN networks which appear to have the added benefit of sussing out which territory your traffic needs to be routed through in order to unblock the content you are trying to access.

The Self Destructing Book

Be especially careful when purchasing digital content, the great irony of digital books and media is that in some cases you never really own what you pay for as one customer discovered when her entire digital library of ebooks disappeared for an unspecified breach of terms of service. This was also made startlingly clear by the 2009 lawsuit that occurred when Amazon remotely deleted copies of George Orwell’s 1984 from Kindle’s. As the screenshot below illustrates we are now in an age where digital copies can be transmitted in a fraction of the time and for a fraction of a cost of their paper counterparts, yet your digital version could be programmed to delete itself and sadly for the hard of hearing visually impaired and those with learning difficulties – stripped of all digital benefits such as use in text to voice applications. Astoundingly – this in addition to be exceedingly more expensive than the paper counterpart. 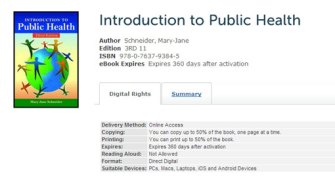 I’m certainly not going to tell you how to go ahead and strip the digital shackles off your textbooks but what I will say is that personally I love being able to annotate and highlight my books and research documents straight from my tablet using iAnnotate. It’s almost like they were made of paper – better in fact, the environment wins too.

Not all digital publishers place their material under ridiculous and counterproductive walls of fire however – I recently was positively delighted to receive an email informing me that Scraping For Data Journalists by Paul Bradshaw (published by Leanpub) a book I bought last year had been updated and enclosed was a link to the PDF of the new editition completely free of charge. This kind of behaviour is what the internet was designed for and I can’t help but get the impression that if publishers and multimedia corporations got this in to their heads they might actually start making money once again.

As you may have heard there is a dark side to the wild west of the underground internet. Anonymous marketplaces exist for every kind of product and service imaginable and there is little to stop the illegal file trader in a land where his tracks are covered. When there is such a huge global market that could be tapped for legally purchased content it certainly seems ironic that it is media corporations that are nudging people over the precipice and down the rabbit hole.

Why does Seattle continue to be a place that nurtures the development of breakthrough technologies but not Minneapolis, Memphis, or Minsk?
Up Next

Is America Out of Gas?

Is American Exceptionalism “the old whiskey bottle we pull off the shelf when we’re feeling down?”