News attention to climate change appears to follow a narrative cycle, where according to communication researchers Katherine McComas and James Shanahan (1999), rather than reflecting the objective conditions of the issue, coverage will follow closely the issue’s dramatic qualities including claims related to risks and costs as well as the surrounding political conflict.

This process leads to up and down cycles of news attention or ‘spasmodic reoccurrences” in coverage. As Max Boykoff has tracked, U.S. news attention spiked in the build up to the November 2009 Copenhagen meetings but then moved to a new period of depressed coverage in the months and years since. 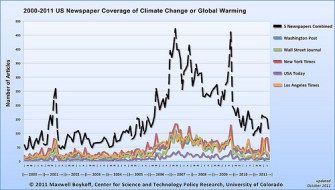 According to McComas and Shanahan, over the years, media coverage of climate change has followed a narrative path that cycles through four major stages that relate to the amount of attention the issue receives. First, during a period of rising media attention, there is a dramatized implied danger.  Examples include the period of the late 1980s as the general threat of climate change was discovered or starting in 2006 when the connection to extreme weather and natural disasters was highlighted by Al Gore and some scientists.

Second, attention to these dramatic threats then leads to a debate over scientific certainty as was the case through the 1990s on manmade causes generally or since 2006 on the connection to extreme weather, the overall severity of the climate change threat, or the timeline until society reaches human induced “dangerous interference” with the Earth’s climate.  Third, at the peak of news attention, momentum and support to address the threat begins to subside, as there is a strong focus on the economic costs associated with action.  An example is the period 2009-2011 as heavy debate focused on the costs associated with cap and trade legislation, a debate amplified by the economic recession. Fourth, coverage moves to a denouement stage where attention to the problem remains low as appears to be the case today.

So what are the conditions that are likely to start this cycle over again leading to a rise in news attention to climate change?  It is possible that the number of extreme weather-related events across the U.S. and internationally may be the new threat that builds attention.  Yet as Matthew Nisbet and Michael Huge describe in a study examining cycles of attention to science debates generally, these events are likely to be covered by specialist science journalists, for the most part.  With a decreased number of such specialists at news organizations today and a decrease in overall space devoted to public affairs generally, these industry trends are likely to further constrain attention.

It is likely that only when a new major political decision is on the horizon such as national legislation – following the 2012 election – will news attention to climate change again spike.  Part of this rise in coverage will be the transfer in attention across news beats as science journalists are joined in their coverage by political reporters and opinion writers, a shift catalyzed by the media lobbying efforts of advocacy groups and political leaders.  Again, in this build up to the decision, according to McComas and Shanahan’s model, there will likely be a heavy focus on the associated costs of action.

Important to note is that McComas and Shanahan’s study and Boykoff’s tracking of coverage only includes print coverage.  A number of outlets such as the New York Times and Washington Post continue to produce considerable coverage of the issue via blogs such as Dot Earth and Post-Carbon.  Future studies of the narrative cycle on climate change and patterns of attention needs to take into account the web-based content provided by news organizations and weight this content against the total agenda-setting impact of the news organization.

Related
13.8
The weirdness of quantum mechanics forces scientists to confront philosophy
Though quantum mechanics is an incredibly successful theory, nobody knows what it means. Scientists now must confront its philosophical implications.
Neuropsych
Why is a Starbucks loyalty rewards program making customers so angry?
The rewards price to get a free cup of hot coffee at Starbucks is going up.
Empowering growth
7 essential management training topics for every team leader
From emotional intelligence to problem solving, these management training topics will set team leaders up for success.
Thinking
What if you could rewire your brain to conquer suffering? Buddhism says you can
For Buddhists, the “Four Noble Truths” offer a path to lasting happiness.
Hard Science
Solved: 500-year-old mystery about bubbles that puzzled Leonardo da Vinci
The solution involves the infamous Navier-Stokes equations, which are so difficult, there is a $1-million prize for solving them.
Up Next
Technology & Innovation
A Little Thing Called General Equilibrium
Economic growth is a tough thing to control if the tools you’re using only deal with one part of the economy.  The problem is that when you push on one […]