It is difficult to gain an accurate perspective on the distance between the planets in our solar system because they are separated by such great distances.

In a previous post, we pointed to a humorous and insightful demonstration by Bill Nye, in which the cycling scientist rode his bike along a highway to demonstrate the vastness of the solar system, and how difficult it is to gauge the size of each planet at this scale. For instance, after riding half a kilometer, Nye showed just how far Jupiter is from the Sun, and how its size in this model is equivalent to a baseball. 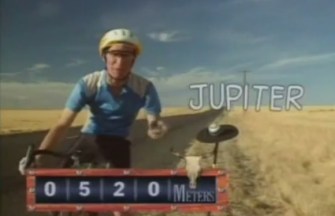 Nye’s demonstration shows why you can’t make an accurate model of the solar system in which all of the planets are visible to the naked eye at once. The distance is too great and the planets would appear too small to see.

An alternative take on this perspective can be found in the artwork of Ron Miller, who has painted the planets as if they were the same distance from Earth as the Moon, in order to demonstrate their size.

For instance, the image at the top of this post depicts Saturn at 240,000 miles from Earth.

Miller is the former art director for the National Air and Space Museum’s Albert Einstein Planetarium, and his work can be found here.

The mourning march for Mandela