One of my favorite spreads in my book The Human Face of Big Data emerged in the course doing the project. Someone was in our office one day and showed me a presentation they were giving, and in the presentation was this picture of the old FBI filing system from the 50s [See above].

The pictures shows women with little files and card catalogues in this vast sort of warehouse.  I thought it was such a cool picture and so much the opposite of our idea of how we store data today.  And then someone showed me a picture of Julian Assange’s data center, a hundred feet underground in Sweden, which had similar shapes.  So I thought this is really cool; these are file catalogues, and here are these huge data servers. 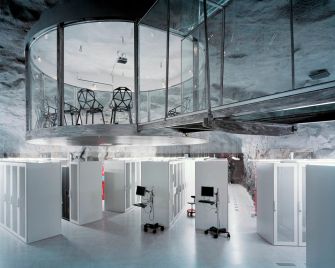 And we found this wonderful Time magazine article on J. Edgar Hoover. Of course, back then he was a hero. He was the head of the FBI, saving the free world.  Now we have found out that in fact he was using a lot of this information for his own personal purposes.  Then we found a Time magazine cover with Julian Assange, basically being very critical of him.  It’s very interesting to me. I wonder if 50 years from now we’ll look back, and maybe Julian Assange will be the hero and J. Edgar Hoover will be the enemy of the state.

The time changes the way that we understand perspective.  So I thought that the way that page evolved was interesting and the last thing that I thought about that was really fun was that someone made a comment that, in fact, the data center where the WikiLeaks data is stored is actually much more vulnerable to attack than the FBI filing system. If you did get into the FBI warehouse, there was no Xerox machine and there were certainly no thumb drives.  So the fact that all this data actually ended up on WikiLeaks was basically it was snuck out on a CD-ROM or on little thumb drives. That would have been impossible back in the ’50s.  So that was actually more secure, even though it was much less accessible.

So this page has this wonderful sort of echoes back and forth through technology and space and time and politics and history.  And it’s one of my favorite spreads in the book.

In Their Own Words is recorded in Big Think’s studio.

If you want a medication to kick in faster, lean right.
Up Next

These tracks, captured by NASA’s Mars Reconnaissance Orbiter, are thought to have been created from sliding dry ice on the Red Planet’s Russell Crater.