“The arc of the moral universe is long, but it bends towards justice.”

The other should be more widely known:

“Darwin was no Darwinian.”

Both are important, especially when combined, because, to paraphrase King:

The arc of our evolution has long bent towards justice.

This short Scientific American blog post explains. “Social contracts are written into our biology. As is the justice they need.” Humans have been team survivors for 10,000 generations. That has crucially shaped our genes and culture, including our tools and social coordination rules. Unjust teams didn’t tend to survive. Counter-dominant coalitions arose to combat tyrannous injustice. Justice, wrote Hesiod, poet of the ancient Greek masses, was “Zeus’s greatest gift” to humanity. Greatest or not, without it human nature wouldn’t be what it is. And we wouldn’t exist.

How “Darwin was no Darwinian” is explained in this brief post. Dr. King is historically, scientifically, and morally correct. It’s a bad break for Darwin, and us, that his name is used to distort his ideas. Particularly as applied to humans, and to justice. Darwin wrote “the social instincts, the prime principle of man’s moral constitution…naturally lead to the golden rule, “As ye would have men should do to you, do ye to them likewise.” That seems not so  “Darwinian.” Darwin knew we are by nature self-deficient and interdependent and that we only survive in collaborative teams. 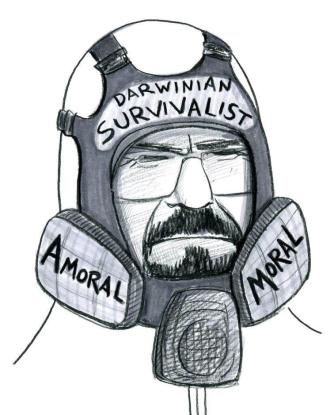 As Bill Gates put it: “there are two great forces of human nature: self-interest, and caring for others.” It’s time we refocused our reason, economics and politics to include the other-interestedness and cooperative justice that we’ve long needed to survive.

Related
Starts With A Bang
The galaxy cluster that broke modified gravity
19 years ago, the Bullet Cluster provided an empirical proof for dark matter. Even today, modified gravity still can’t explain it.
Neuropsych
Psychology studies that go viral are likelier to be bogus
A new 20-year analysis of over 14,000 psychology studies finds that a study’s media coverage is negatively linked to its replicability.
The Future
How a device transmits radio waves with almost no power
Apart from the energy needed to flip the switch, no other energy is needed to transmit the information.
The Present
Radical idea: Redraw the U.S. map as a nation of city-states
While cities drive national economic growth, their political geography means they cannot effectively deal with inequality, poverty, and other socioeconomic problems.
The Learning Curve
Why do high IQ people stagnate in their careers? Emotional intelligence
Research suggests that emotional intelligence is more vital for success than IQ.
Up Next
Monogamy as a Western Invention?
When the Western powers colonized Asia, naturally they enforced their own views on sex, gender, and relationships onto the subjugated civilizations. This is from a chapter on ‘Gender’ taken from […]