More than 20 people are dead and at least 90 are missing and presumed dead after a huge hillside of mud and clay and rock collapsed and slid down into their little village of Oso in western Washington. As the search goes on, more a matter of recovering the dead than rescuing anyone who might still be alive, questions are being asked; about emergency preparedness or warning systems or insurance coverage. But no one is asking perhaps the most important question of all. What were those people doing living in such imminent danger in the first place?

There can be no clearer example of people ignoring clear evidence that practically screamed “Living here puts you in constant mortal danger!!!!” There had been landslides on that hill in 1949, 1951, 1955, 1970, 1984, 1995, 2002, a huge one in 2006, and even one last year. According to a report in the Seattle Times, there had been warnings from officials, like the one from the Army Corp of Engineers after the 1999 slide about “the potential for a large catastrophic failure.”

Geologists who have studied it call the hill Hazel Landslide and Steelhead Haven Landslide. One investigator wouldn’t even walk on it, saying the ground was too soft to hold him up. Locals used to call the hill Slide Hill and the streams it regularly collapses down into as Slide Creek and Mud Flow creek.

All sorts of human engineering had been applied to reduce the risk, lulling some into a false sense of safety. Retaining walls and berms and drainage ditches were built. The river was even moved, to reduce how much it was washing away soil at the base of the hill. But engineers warned that these wouldn’t work. A University of Washington geologist said;

“It is almost impossible from a practical standpoint to stabilize this slide in its present position. The slope will continue to slide and the area will increase. Drainage ditches, dikes, walls, etc., would give at best only temporary relief. The structures would need constant repair and replacement.”

So why did people still live there? Some were apparently in blind, ignorant denial, including, tragically, the head of the local Emergency Management department, who said Monday “It was considered very safe,” “This was a completely unforeseen slide.”  Other officials knew but didn’t act, including those with the power through zoning laws and even eminent domain to keep people out of this terribly dangerous place. According to a New York Times graphic depicting building in the slide area, seven of the homes (the yellow dots) destroyed in this landslide were built AFTER the 2006 event. 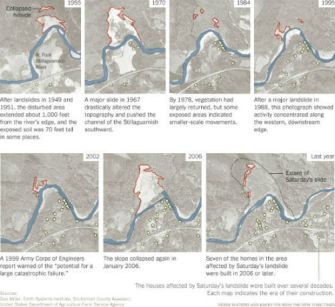 But most people knew. So why were they there? The comments of two environmental engineers begin to reveal the real reason for this tragedy. One said that officials’ idea to buy homeowners out went nowhere because “…nobody wanted to sell their property and move.” The environmental manager of the Stillaguamish Tribe said, with a heavy heart, “We always thought there was a possibility that a catastrophic event could come. We were hoping that wouldn’t happen.”  Naïve hope has now turned to tragedy

This was a clarion example of the Risk Perception Gap, when because of the subjective, instinctive, emotional nature of the psychology of risk perception we fear some things too much, or some things too little, compared with what the facts clearly prescribe. This tragedy affords lessons relevant far beyond Oso.

Not everyone who lives in areas at risk for potentially deadly natural events does so voluntarily, of course. But many do, and they all use a variety of subconscious cognitive tools that allow them the choice of living in a place they like, but which could kill them.

–Something the cognitive scientists call Optimism Bias lets us say “Yeah it may be a risk, but it won’t happen to me.”

–The things we do to ostensibly reduce the risk, like reinforcing a hillside that always collapses or building sea walls or shelters or tornado or volcano or tsunami warning sirens, gives us a feeling of control, and when we feel like we are in control we feel safer, safe enough to live in places where the evidence is pretty clear that nature is far more in control that we can ever be.

—We’re lousy at probabilities, so we figure a risk with a low likelihood is acceptable in exchange for that pretty house by the river or shore or forest…even though the consequences could be death. We forget, and never really understand, that a LOW likelihood in any one year adds up to a HIGH likelihood pretty fast if you throw a few years together. The chance of a deadly magnitude 6.7 or greater earthquake somewhere in California (America’s most populous state) in the next single year may be low but over the next 24 years it is 99.7%, essentially a certainty.

–Naturalrisks don’t scare us as much as human-made ones. Not a lot of people choose to move in next to nuclear power plants, which are FAR less likely to kill than the floods and earthquakes and mudslides and hurricanes that hit the beautiful natural places we do choose to live.

So tens of millions of Americans live in “Tornado Alley”, or in coastal areas regularly ravaged by hurricanes. 150,000 people live in the lahar zones of Mt. Rainier, an active volcano, and thousands more live in the danger region around Mammoth Mountain in California, another active volcano. Around the world, hundreds of millions live, voluntarily, in mortal danger from such natural events.

Some of these people will die because of their choices, or because of the poor risk management choices of local officials who are human too and just as vulnerable to these emotion-based risk misperceptions as you and I are. But maybe, just maybe, the Oso landslide tragedy can spare a few of those lives, by teaching us to be more cognizant of how our feelings can impair healthy and safe decision making. The Risk Perception Gap is real, it has been studied, the psychology of it is understood, the factors that lead to choices that put us in danger have been identified, and we can apply all that knowledge to making smarter choices. Until we do, the hills will keep tumbling down on us, and – as utterly tragic as the Oso tragedy is – shame on us for still being in the way.

The massive craft could carry 100 humans to Mars and revolutionize space exploration.
Up Next

It’s a delicious treat to watch godless libertarians rise to the defense of Protestant evangelicals this week.