PIPELINES!!!!! Evil! Dangerous! Huge threats to the environment! MUST BE OPPOSED! Could there be a clearer example of how naïve and simplistic we’ve become about the harms of modern technology, blinding us to the benefits of these technologies and the tradeoffs they always involve. This knee-jerk Back to the Cave (okay, back to the cabin in the woods) romanticism of an earlier less industrial time and rejection of modern technology is getting not only a little extreme. It’s getting dangerous.

Yes, pipelines do sometimes leak. Yes, they do sometimes explode. But of course, mostly, they don’t. Mostly they just quietly carry the oil and natural gas that are quite literally the lifeblood of modern life, the fluids that turn on the lights, heat our homes and schools and offices, run our motor vehicles, power our factories, and produce a immense range of petrochemical-based products. Here is a map of the arteries – oops, I mean the pipelines – carrying  natural gas in the U.S. at the moment. Most of them have been operating for decades, mostly without incident. 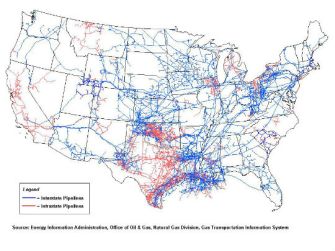 There is no question that the recovery, transport, and especially the use of fossil fuels has done and continues to do egregious harm to the environment. But opposing the pipelines that carry them, which has become a de facto position one must hold to be a true environmentalist, is Quixotically naive, sort of like blaming the road for car crashes or your faucet for delivering water from a contaminated source. No roads would mean no crashes. No faucets would mean no contaminated water. But how obviously foolish it is to think so simplistically, and how dangerous.

Dangerous, because the opposition to pipelines is really about something much larger. It is really opposition to what they represent. It’s the same as opposition to power transmission lines, even the ones needed to carry renewable wind and solar and hydro energy from where the wind blows and the sun shines and the water flows, to where the people are. It’s the same as opposition to fracking, to genetically modified food, to nuclear power, to industrial chemicals. It’s a BANANA (Build Absolutely Nothing Anytime Near Anything) rejection of modern technology generally. It’s a naive Bill McKibben-esque cry that modern human life has essentially meant The End of Nature. You know, pure nature, the real kind, the true kind, the unspoiled kind that was around before we mucked it all up.

That romantic idea, that the human species and all we do – good and bad – are not part of nature, is indeed quite dangerous, not only because it’s ridiculously naïve but because it rejects out of hand all the ways that human technology can help, as well as harm. Fracking, when done carefully and safely, harvests a fossil fuel that emits only half the greenhouse gas carbon dioxide that coal does. Nuclear power, which poses risks from radiation that are nowhere near as threatening as common fears assume (see Why Are We Afraid of Nuclear Power), emits none (no particulate pollution either). Solar farms may indeed have negative effects on desert tortoises or other species that live in wide open sunny places, but they supply energy in a way that obviates the need for fossil fuels and their evil pipelines. Wind farms do too, even if they require cutting down some trees and they kill some birds and they stick out like sore thumbs in those pretty Vermont hills.

Power transmission lines can not only bring renewable energy to the end users, but smart grid technology can do so in ways that make energy use far more efficient. But such arguments fall on deaf ears to some in northern New England opposing the Northern Pass project to bring hydro power from northern Quebec down to the northeast energy market. Opponent’s signs in New Hampshire, the ‘Live Free or Die’ state, say things live “Live Free or Fry”. Cute, but climate change will produce a lot more frying than power lines.

Biotechnology (genetic modification) offers enormous potential to feed a hungry world and develop species that can deal with climate change, but environmentalists oppose it. They oppose food irradiation too (low doses kill the living germs in the food but don’t change the food), even though it can reduce millions of cases of food-borne illness. Industrial chemicals, perhaps the ultimate automatic enviro-bogeyman, help produce most of the physical products of modern life. Without them you wouldn’t have the device on which you are reading this, and a whole lot of other stuff.

Yes, industrial chemicals do harm, and we should be more cautious than we have been. Yes, pipelines leak. Yes, wind and solar farms and power line rights-of-way kill trees and birds and desert turtles. And yes, such industrial facilities look a whole lot uglier than the natural environment that’s there before the bulldozers and chain saws show up.

But as emotionally appealing as a love for a purer, cleaner, less despoiled natural world may feel, it naively ignores current human reality; we’re here, we’re a species that is part of the biosphere, and we are in deep trouble because of the damage we’ve done to that biosphere. Our intelligence has helped produce that damage, but it has also produced some of the most dramatic gains in the quality of life humans have ever known. How ignorant it would be to ignore those gains and focus only on the harms, and, going forward, to reject what our intelligence has provided, the tools and technologies that can help us solve at least some of the problems we face.

There is no machine known that is more efficient than a human on a bicycle.