A lot of work on climate change these days is trying to address what seems to be a major part of the problem; people don’t care all that much. There are documentaries like the Showtime series Years of Living Dangerously and NBC’s Our Year of Extremes. There are education efforts like the American Academy for the Advancement of Science’s What We Know campaign, websites like Climate Central and Real Climate,  and academic programs like Yale’s Project on Climate Change Communication and George Mason University’s Center for Climate Change Communication. All these efforts share the belief that if people only know the facts about climate change and finally understand just how serious the problem is, they will surely raise their voices and demand that our governments and business leaders DO SOMETHING!

That is naive. It ignores ample research into the psychology of risk perception that finds that just knowing about something has little to do with how scary or not it FEELS, and that feelings matter more than facts. Climate change simply does not have the psychological and emotional characteristics that make it feel scary. It doesn’t feel “It can happen to ME” personal. It doesn’t feel immediate. It doesn’t feel…well…real. It’s more of an idea, a concept, an abstraction.

Many people have suggested that framing climate change in these ways might help make the threat more emotionally resonant. (The Importance of Risk Perception for Effective Climate Change Communication). Good risk and science communication practice argues against what Years of Living Dangerously and What We Know and most other programs are doing; broadly educating people about the full global long term breadth of the whole climate change problem (with sequences about deforestation in Borneo or civil war in Syria, or sweeping statements like “We are at risk of pushing our climate system toward abrupt, unpredictable, and potentially irreversible changes with highly damaging impacts”) in a Deficit Model belief that if people just know all they need to know they’ll ‘get it’.

But these education efforts, and the Blab-o-Sphere punditry about whether they work, (the Breakthrough Institute’s Global Warming Scare Tactics and the predictable response from Think Progress/Joe Romm, The Brutally Dishonest Attacks on Showtime’s Landmark Series on Climate Change) miss a much more important question. Do we really need to care how much people care? How much does public concern really matter? A blasé public seems to be a problem, but just how big a problem is it, really?

Consider that combating climate change requires nothing less than a radical restructuring of how the world makes and uses energy, and consider the overwhelming level of public concern it would take to impose such sweeping changes on the vested interests profiting by the status quo (and let’s be honest…to impose such changes on a public comfortable with the status quo). We’d have to feel we were at war…bullets flying and bombs dropping and buildings burning and body bags real, live, NOW “I am in Danger” war…before public concern about climate change would grow strong enough to drive those sorts of actions.

The effects of climate change will ultimately get that destructive (the damage has already begun but it will take hindsight before we fully realize it) but by then it will far too late. So senior policy makers in government and business have to act, now, even without the deep public concern that might make acting easier. And many are. Without a huge public mandate about climate change, the Obama administration is taking a wide range of meaningful steps, including putting a cost on carbon emissions by regulating emissions from power plants. States and local governments across America are subsidizing commercial and residential renewable energy. (Which got me to do this to my house!) 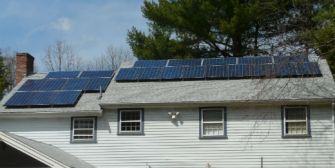 Germany is undergoing a radical energy transformation called Energiewiende(not without difficulties German Energy Runs Into Problems). The Chinese and Indian governments are investing billions in nuclear energy. Feed-in tariffs, that give a cost advantage to renewable energy fed by independent producers into the power grid, are effectively putting a price on and reducing carbon emissions in nations around the world.

Businesses are acting, and not just to sell ‘green’ to consumers. Major corporations, including some oil companies, are making long term plans that factor in a cost on carbon emissions. Most of the biggest companies in the world, like Walmart, are working to reduce greenhouse gas emissions. IKEA just bought a 98 megawatt wind farm in Illinois as part of a program to be come a net zero energy consumer, producing as much renewable energy as it uses. Apple is among many companies spending millions to achieve the same goal, and their CEO recently told investors at the annual shareholder meeting to get out – to sell their stock – if they don’t believe that it is in the company’s best interest to take climate change and sustainability seriously.

There are many more examples of how governments and businesses are doing the sweeping things necessary to start addressing climate change. Too little, certainly, and too late to prevent serious damage from emissions already in the system. (And there are far more examples of governments and business that AREN’T doing what needs to be done.) But it wasn’t public concern that drove these actions. It was prudence and common sense by decision makers who, despite a blasé public, are taking the problem seriously.

Would more be happening, faster, with more public pressure? Certainly. Everyone engaged in combating climate change needs to help raise that pressure. I do with my own work. But the scope and complexity and urgency of what needs to be done are so much greater than anything that public support will ever truly push for. So a more aware and concerned and engaged public may be (IS) a laudable goal, but we ought to be cautious about how much we think it will ever do to actually address the problem.

We should all pause to appreciate the awe-inspiring beauty of the Universe.
Up Next
Surprising Science

Did you know that hobbits were real? Well, a species that shared similar traits with hobbits existed here on Earth (not just Middle Earth) 18,000 years ago. The one-yard tall […]