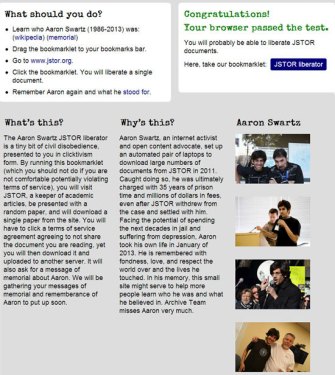 Last Friday Aaron Swartz committed suicide, shortly before his Federal trial was due to begin. According to the US Attorney’s press release, “if convicted on these charges, SWARTZ faces up to 35 years in prison, to be followed by three years of supervised release, restitution, forfeiture and a fine of up to $1 million”. Swartz’ crime? Downloading research from the JSTOR database of academic research.

Within days of the death of Aaron Swartz, academics began posting their research papers online for free using the Twitter hashtag #PDFTribute. Within minutes a scraper popped up to database the links at pdftribute.net. Now, a browser plugin called the “Aaron Swartz Memorial JSTOR Liberator” has been developed which will use an individual’s credentials to “liberate a single document” every time the bookmarklet is clicked. Users are warned this is a breach of terms of service, similar to that committed by Aaron Swartz. Once again we seem to be witnessing the Streisand Effect in action.

Micah Allen, a neuroscience researcher and open data activist has mused on idea of whether we are seeing the beginnings of “Papester” for academic research, an analogy to napster. For members of the public who fund research through taxes and the many researchers at institutions (often but not always in the third world) that can not afford journal subscription fees; and the patients whose lives depend on doctors and scientists having access to cutting edge research, this development may not be a bad thing.

Regardless of how things develop, one thing researchers can do to help ensure Aaron Swartz did not die in vain is to ensure their research is published in open access journals. For work already published researchers do not always have to break the law or the terms of service of the publishers who now hold the copyright to their work. Researchers can simply go back to the publishers of their research, (and perhaps – but probably best not, remind them that they never earned a penny – and often indeed spent large amounts of money on publishing fees – for their research which has now been locked away) and request permission to publish a copy of their own work on their blog. An example of a researcher who has done this very successfully is Vaughan Bell, author of the Mindhacks blog who has posted a direct link to the PDF’s of all his research online. Once this is done, anyone with a Google account can access your research and indeed researchers can access your researchers without juggling VPN’s, logins, and other other hoops placed by publishers that hinder access to research.

Hybrid animals emere when two different species from the same family reproduce. For many years, the kunga’s lineage was just another genetic mystery.
Up Next
Politics & Current Affairs

It’s unclear exactly what he said, but on Monday, Supreme Court Justice Clarence Thomas spoke during an oral argument for the first time in nearly seven years.  What prompted the […]