A new Pew survey reveals that as the economy shows signs of a modest recovery, public belief in climate change may be on the rise. Understanding how climate change perceptions shift relative to the performance of the economy is centrally important to effective communication and public engagement.

This past spring in a Q&A style interview conducted by Alyson Kenward of Climate Central, I discussed the relationship between the economy and perceptions as well as the need to think about public engagement in regional and local terms.  I have posted the interview below.

Q: Around 2005, the American public became more concerned about climate change, all the way to 2007. Then, in 2008, polls showed the public as being less concerned. What happened?

Nisbet: Starting in about 2005 and peaking in 2007, there were historic levels of concern and belief of climate change in the public, but that time was also unique because it had the lowest levels of unemployment since before 2000. In 2007, national unemployment was only about 5.5 percent. What changed in 2008 and 2009 was that unemployment spiked up to close to 10 percent.

When people debate about what caused the public to become less worried about climate change, the first thing a lot of people point to is Climategate (the 2009 release of controversial emails sent between several prominent climate scientists). It’s plausible that this could have played a part, but there are a lot of other potential explanations. When it comes to talking about what influences the public’s concern about the environment, the elephant in the room is the economy. No one is talking about how the economic conditions likely had an influence on the decline in the public’s concern.

How strong the economy is tracks really well with how concerned people are about the environment and climate change, both in trend data and in studies of individual behavior. 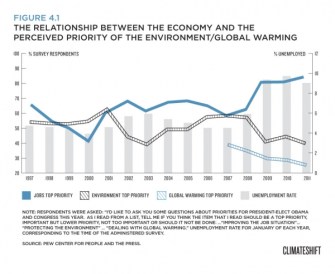 In Chapter 4 of Nisbet’s Climate Shift report, he illustrates how the trend of the public’s concern for environmental issues compares to unemployment rates in recent years. Credit: American University.

Q: Why would a downturn in the economy affect how people feel about climate change?

Nisbet: There is a basic social psychological theory out there, the idea of the “limited pool of worry.” In general, the idea is that people face so many challenges in their lives that they can really only respond to a certain number at any one time. It turns out that a bad economy and high levels of unemployment are the kinds of things that swamp out almost any other concern for people. When you’re in fear of your job, or where your next meal is coming from, and those are immediately present, you’re just not going to be as worried or concerned about other things, including the environment.

Q: If the economy has such a strong influence on what people are concerned about, does that mean people aren’t likely to change their opinions about climate change until the economy improves, which could be a few years from now?

Nisbet: The economy poses a major communication challenge for climate change. It is a far greater communication challenge that what the conservatives have put forth in terms of questioning the science. In fact, in recent years, conservatives haven’t really had to even speak out against the scientific consensus. They can just say, “even if climate change is a problem, we can’t afford to take action against it,” and that might be enough to stall any and all action. The same strategy has been used by Democrats from agricultural and industrially-focused states. To make people pay attention to climate change, we’ll need to find ways to show them why it matters to them now, how it is affecting them now, and how actions can lead to benefits rather than costs.

Q: What are some of the ways in which climate change can be communicated in a way that matters to people?

Nisbet:With another researcher, Edward Maibach, who is the director of the Center for Climate Change Communication at George Mason University, we’re looking at how you can frame climate change in a way that is more personal to people. For example, we’re looking at, to what degree, you can communicate about climate change as a public health concern. If we can engage people in a conversation about the link between long-term chronic health concerns, like allergies, and climate change, then they will understand what the impact will be for them. They may begin to care about climate change because it is going to make their condition worse in the future.

The same can be said for communicating to people about actions that are local and regional, like increasing accessibility to public transportation, making communities safer and easier to walk in, or making fruits and vegetables more affordable, which could reduce meat consumption. These are the kinds of things people will want to invest in, not because they offer a long-term climate change benefit but because they improve the community and quality of life in general.

Only after you connect with people this way, at the personal and local level, can you then get people participating in a dialogue about bigger policy efforts. And that’s rarely been done before now. We’ve never really connected at a local and personal level about climate change.

Q: You’ve also recently written about the politicization of climate change and how that has influenced the public. How can the science be politicized and what does this mean for how to improve climate change communication?

Nisbet: You don’t communicate about climate science in a vacuum; of course you have to consider the political context. The Cultural Cognition project at Yale shows that when people interpret scientific advice they hear, in connection to the proposed policy solutions, as threatening to their personal values or their world view, the first thing they do is argue against the science. Similarly, pollsters found that in 2009 and 2010, just as cap and trade became more politically viable, there was a simultaneous increase in skepticism amongst Republicans. These polling experts argue that this means that when you ask Republicans and Conservatives about the science of climate change, you shouldn’t interpret their answers fully as knowledge, but rather as indirect opinions about the policies being posed. The perceptions of science, it seems, are policy dependent.

What this means is, if we’re trying to make strategic decisions about where to invest in communication activities, we have a choice. Do we double-down and invest even more money and resources in trying to counter the work of Republicans and conservatives? Or, do we invest more resources in alternative strategies and consider a broader range of policies, perhaps smaller in scope and across several levels of government. I argue that if we take a different approach, like working at the local and regional level and try to facilitate public participation directly in the discussion, then people are more likely to come together, start talking about climate change, plan, connect, and find common ground.

Is the Universe finite or infinite? Does it go on forever or loop back on itself? Here’s what would happen if you traveled forever.
Up Next
Surprising Science