The Dow Jones Average is about to break 15,000. Any day now the atmospheric concentration of CO2 will break 400 parts per million. Think there’s a connection?

A couple other numbers might make things clearer. When Charles Keeling started measuring CO2 concentrations in the air above Mauna Kea in Hawaii in 1958, the levels were 316 ppm,  and the Dow was at 497. In 1958 the global population was 2.8 billion. It’s now at 7.1 billion. 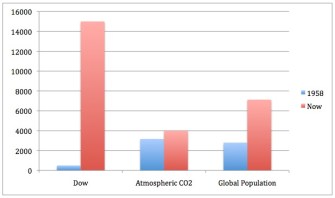 Think there’s a connection now? Of course there is. Simplistically, each data set reflects one aspect of the same phenomenon; more and more people are living in a finite biosystem, living more and more prosperous and materially consumptive lives, using up more and more of the resources in the system, and dumping more and more waste back into it. We are living unsustainably, and eventually we will reach the system’s carrying capacity. Sounds like pretty dark news, right? There are several possibilities as we approach those limits.

1. We may do what many species do…go flying past the carrying capacity only to crash back to a level the system can support.

2. We may do what some other species do, and many human tribes have managed…to level out somewhere near the carrying capacity of the system without flying too far past it, so we reach a sustainable equilibrium before suffering more catastrophic adjustments.

3. We might actually have the wisdom to adjust the carrying capacity of the system itself. We can move the line.

There have been a lot of gloom and doom-y predictions that we are on Trajectory 1, including Thomas Malthus’ An Essay on the Principle of Population  (which was sufficiently gloomy that it helped earn economics the nickname “The Dismal Science”), Paul and Anne Ehrlich’s 1968 The Population Bomb, and Donella Meadows 1972 The Limits to Growth. They all argue the same basic idea; it is unsustainable when population grows exponentially (faster and faster) while industrialization and productivity only grow at a linear (more fixed) rate, in a system with a finite supply of space and natural resources.

But are we doomed to Trajectory 1? Certainly the scale and speed of population growth seems to have us headed that way. One hundred years ago there were 1.7 billion people on the earth. Since then, global population has more than quadrupled. (At Population Action.org, you can enter your birth date to see the global population when you were born.)

And the pace and sweep of industrial and technological growth seems to have us heading toward a Trajectory 1 crash as well. Per person energy consumption globally is now three times greater than it was a hundred years ago. Think of all the physical stuff our modern material world has given us, all the raw materials needed to make all that stuff, all the waste produced by making, and tossing out, all that stuff. And the majority of the earth’s population is just starting to reach the levels of material consumption of the developed world.

For the first time humans are now operating at a fully global scale. We can’t just move on to Ecosystem B anymore when Ecosystem A is all used up, liked we used to. There are very few ‘other’ environments left. And operating at a global scale means we are now causing changes, in some cases radical changes, in basic natural operating systems we depend on faster than those systems can adjust to; climate/weather, soil creation/soil loss, the carbon cycle, the nitrogen cycle. Welcome to The Anthropocene, a new epoch in natural history in which human activity is altering the entire physical and biological systems of Planet Earth.

These inherent logistical limits seem to set a fixed carrying capacity that we are going to exceed, if we haven’t already. But while some specific limits are indeed fixed (we can’t manufacture helium, and we’re running out of it), we can use our wits to adjust what the overall carrying capacity actually of the system actually is. We’re running out of fresh water, but nuclear power can desalinate seawater. We’re running out of arable land, but careful precision genetic modifications to plants and animals can produce far greater gains in food production than those produced by science and technology in the Green Revolution of the 50s-70s. Synthetic biology, nanotechnology, and fusion power (there are several privately funded programs already building test fusion power plants), hold possibilities that could dramatically reset what the carrying capacity of the biosphere actually is, and even help us repair, or at least adapt to, some of the serious damage we’ve already done, like climate change, the acidification of oceans, and the loss of topsoil (nearly half of the globe’s agriculturally productive land is seriously degraded.)

There is even evidence that our wits may help us resolve the biggest threat of all, the root cause of unsustainability…exponential population growth. As people become more materially secure, and educated, they stop having as many babies. Global population is expected to increase another 20-30% by 2050, to 9-10 billion. But then it is predicted to actually decline (which presents its own problems, as the population gets top heavy with less productive  elderly.)

We are certainly condemned to suffer some of the impacts of Trajectory One, the serious consequences of having sped too fast and far beyond what the system can tolerate. But the same human knowledge and technological power that has put us on that path can also help us modify that trajectory, both by adapting to the limits we can’t reset, and adjusting those we can. This will take a more mature attitude toward technology and growth than Bill McKibben’s simplistic “The End of Nature” vilification of human ‘interference’ with the biosphere. We have to rise above that sort of naïve environmentalism and recognize that technology and growth are not merely a path to Armageddon but are contributors to both the problem and to potential solutions.

Yes, a rising Dow, and rising temperatures, and rising seas, and rising population, are all connected. But that connection does not necessarily portend The End of The World As We Know It that it initially seems to.

The science fiction dream of a traversable wormhole is no closer to reality, despite a quantum computer’s suggestive simulation.
Up Next

There has been much focus over recent years, on brain machine interfaces (BMI) allowing for the direct control of a computer by electrodes placed on or near the brain. Unfortunately […]