Say you’re offered an exciting job opportunity, one that would push you out of your comfort zone and possibly yield big rewards. Would you take it?

The answer could hinge on what kind of relationship you have with your significant other. In a study published in Personality and Social Psychology Bulletin, psychologists from Carnegie Mellon University found that people with supportive spouses were more likely to take on challenging opportunities, and that accepting those challenges led to increased personal growth, happiness, and psychological well-being.

Research on social support has tended to focus largely on how relationships can facilitate “stress buffering” when facing adversity. But relatively little research has been done on how close relationships support “thriving.” The researchers ask:

The researchers presented one member of 163 married couples with a choice: solve a simple puzzle, or compete for a prize by giving a speech. People with more supportive partners were more likely to go for the prize, while those with partners who discouraged or expressed little confidence in them chose to solve the puzzle. Six months later, participants who competed for the prize reported relatively higher levels of well-being, personal growth, and happiness.

“We found support for the idea that the choices people make at these specific decision points—such as pursuing a work opportunity or seeking out new friends—matter a lot for their long-term well-being,” said Brooke Feeney, lead author of the study. 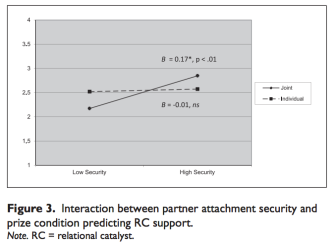 Participants who pursued the prize had partners who expressed enthusiasm about the opportunity, reassured their partners, and discussed the potential rewards of taking on the speech. The supportive partners reported higher levels of attachment security, leading researchers to hypothesize that these secure individuals might be more supportive because they’re not as focused on having their own needs met.

“Significant others can help you thrive through embracing life opportunities,” said Feeney. “Or they can hinder your ability to thrive by making it less likely that you’ll pursue opportunities for growth. 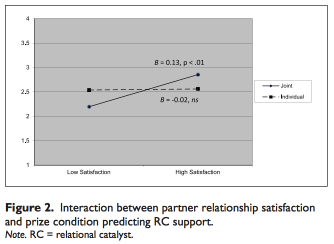 The researchers said their study is useful because it accurately represents the types of choices couples face in daily life, but suggested that:

…future research is needed to establish the generalizability of this work across close relationships of varying types, lengths, and quality. Despite the limitations of this investigation into relational influences on decisions to embrace opportunities, it provides a rigorous initial test of these processes using a combination of experimental, observational, and longitudinal methods.

In tough competitions, men tend to give up early when they feel a low sense of control. Testosterone eradicates that effect.
Up Next
Politics & Current Affairs

How Game of Thrones Speaks to the Recent Violence in Charlottesville

This season of Game of Thrones has been especially political, and episode 7 relates to the social and political climate of the U.S. like never before.