In the 1960’s Stanley Milgram introduced the lost letter technique which had a notable impact on the field of social psychology (unfortunately the original paper is still paywalled even though it is now two decades after his death). One of the greatest inherent problems with social psychology is that you can’t look directly at what is going on inside someone’s head. People have a tendency to say one thing and do another. Milgram assessed political views by dropping letters addressed to “friends of the Nazi party”, the “friends of the Communist party”, to “medical research associates” and to a control group; on the floor and waited for passers by to post them. In the original expermient 72% of the letters to the medical researchers arrived, the controls got 71% while the Nazi’s and Communists both tied at 25%. In the years that followed the lost letter technique was altered by social psychologists to predicts elections and measure attitudes to race.

The technique has fallen out of use in the digital age. Today we have more high-tech ways of measuring behaviour, but it is still extremely difficult to accurately measure the difference between what people say in public and what people do in real life.

A small german company that could only be described as a gaggle of evangelical atheist shoemakers noticed in autumn of last year that their parcels to customers in the US were going missing at an alarmingly high rate. They made a number of enquiries with the US Postal Service (USPS) which naturally went ignored. Official complaints were logged with DHL but the response was always that “the disappearances were always stateside”. The German shoemakers wondered if the mysterious disappearances could perhaps be explained by the fact that they had recently begun wrapping their parcels in tape labelled “ATHEIST”. The company decided to take matters in to their own hands and run an experiment. The experiment only differs from Milgram’s experiment in that instead of dropping their parcels on the floor the atheists actually put them in to the post.

Now I should say at this point that the graphic below did ring my PR stunt alarm bells. We should take any study of this kind with a pinch of salt. I decided to contact the shoemakers and ask some more questions. I am informed that the group are working with a social psychologist to properly write the experiment up for peer review, I was assured that:

“We have numerous emails, letters and spreadsheets documenting complaining correspondence with DHL, who were in the tricky position of having to represent USPS to us. We have lots of customer testimony of disappearances and delays from pre the study and from within the study… we would include this in a full write-up of our study.”

I wish I could say that the levels of prejudice demonstrated in this study are shockingly out of kilter with how people say they would act towards atheists. Unfortunately, prejudice towards atheists is not so low it can only be measured using clandestine behavioural techniques. A Gallup poll conducted last year suggested that atheists are the most distrusted group measured. Only 54% of Americans asked said they would consider voting for an atheist President: 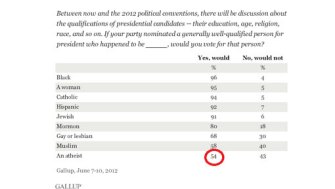 It seems atheists have a long way to go before their era of prejudice comes to an end.

People naturally judge fact from fiction in offline social settings, so why is it so hard online?
Up Next

Prison does things to a man, even if he gets to go home at the end of a long day of guarding the inmates. Scotland’s HM Prison Barlinnie features the […]