Eight years ago professor of global health Hans Rosling delivered a TED talk that remains one of the most viewed TED talks of all time. This month at the Nordic Media Festival, Rosling gave a spell binding hour long talk (which you can view at the bottom of this post) that expands upon his earlier work, it is not to be missed. In the first eight minutes of the talk, Rosling asks the audience to vote on a series of true and made up statistics that have a great impact on our world view. I’ve copied the questions below, so if you are unable to watch the video right now, you can get a head start answering the questions, but you’ll have to watch the video yourself to get the answers!

1. How is the global population distributed? 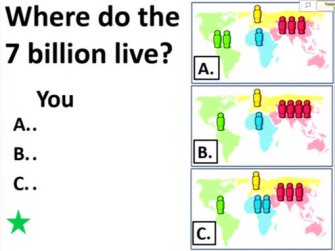 2. How many babies per woman are born in the world today? Which line is the correct one? 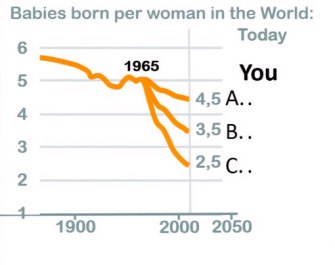 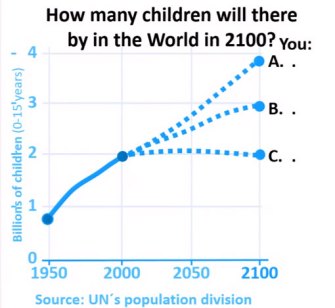 4. What percentage of adults in the world today are literate?

5. In the world today on average 30 year old men have spent 8 years in school. How many years have 30 year old women spent in school? 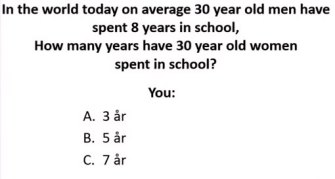 6. What is the life expectancy of the word population? 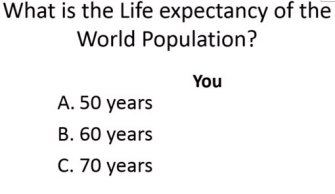 7. What percent of the children in the world get vaccinated against measles? 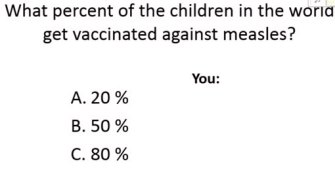 8. In the last 20 years the proportion of people living in extreme poverty has…

Rosling demonstrates that nearly all of us have a very different picture of the world to reality – and our assumptions are skewed in directions we don’t expect, causing us to have a range of absurd beliefs. Rosling argues:

“It is not about political views or ideologies,  it is blunt facts which are not known” – Hans Rosling

Spoiler warning: below I’ve let slip a few of the many facts Rosling describes. Skip down to the video now if you’d rather not spoil the surprise.

Rosling proceeds to provide a series of fantastically beautiful visual demonstrations of the data as epidemiologists and global health experts understand it. Rosling’s passionate, concise and delightfully humorous narrative will keep you glued to the data he presents throughout the talk. Describing one of the many startling facts, he says:

“The number of children in the world has stopped growing, the biggest event in the history of mankind was completely missed by the media because it happened so slowly… big things happen slowly, but they change the world” – Hans Rosling

But my favourite quote of the talk has to be:

Rosling demonstrates powerfully how our assumptions about how we should deal with the big problems facing the world such as overpopulation and poverty are wrong. Counterintuitively, one step we can take to address overpopulation is to provide vaccinations, so the parents of children in the poorest parts of the globe don’t have to have more than six children just to ensure an heir survives. After describing the 80% of children in the world who are successfully vaccinated against measles (an answer only 25% of the audience and ~9% of the public got right), Rosling exclaims:

“…but then we don’t know about it, it is a complete failure of you and even more of us in academia and in schools, why don’t we tell people, why don’t we put it on the first page of the news? Then people want to debate about aid, everyone who doesn’t know this are completely disqualified from having a view about aid: [vaccinations are] the most effective way to save the life of a child… for one to two thousand dollars you save the life of a child.”

Rosling also argues that women’s rights and attitudes to women in the most patriarchal societies have an absolutely massive impact on population growth:

I hope my teaser has been sufficient to persuade you to watch the video in full below:

Related
Starts With A Bang
Ask Ethan: What are white holes, and do they really exist?
In General Relativity, white holes are just as mathematically plausible as black holes. Black holes are real; what about white holes?
Life
Strange life forms create an “alien” ecosystem in an abandoned uranium mine
Slimy biofilms made up of bacterial and eukaryotic life forms have taken over an abandoned, flooded uranium mine in Germany.
Hard Science
Earth has an eerie “sodium glow,” and astronomers use it to image stars
Air currents in our atmosphere limit the resolving power of giant telescopes, but computers and artificial stars can sharpen the blur.
Health
How saliva changes the flavor of food
“It’s a liquid, but it’s not just a liquid.”
High Culture
Why are flood myths so common in stories from ancient cultures around the world?
Could the prevalence of flood myths around the world tell us something about early human migration or even the way our brains work?
Up Next
Surprising Science
Inbox (∞): Email Is Broken. Let Your AI Assistant Help.
New software applications that aim to organize your inbox, which can at times grow like a malignant tumor, take different approaches to simplifying how you send and receive mail.