A few months ago I posted a piece which has become my most popular blog post by quite a landslide.The postcovered various techniques for learning and looked at the empirical evidence for and against their efficacy based on recent research. This post is my follow up, in which I look at the case for one tip for learning that it seems really could have a big impact.

A growing body of evidence from the last two decades suggests that our attitude towards our own potential for intelligence has a considerable impact on our lives, furthermore we are incredibly vulnerable to having this attitude or “mindset” moulded for better or worse, by how people praise us in a way that is both shocking and problematic. Stanford psychology professor Carol Dweck has presented a range of startlingly fascinating findings on the topic which have been broadly supported by further research. The conclusions that can be drawn from Dweck’s research have major implications for how we should think about learning, teaching, bringing up our children and how we choose the words we use when talking to those around us.

In another of Dweck’s experiments, failing students were given classes on study skills using techniques such as mnemonics, but (unsurprisingly, considering the research I described in my last blog post on the topic) the students continued to fail – this was the control group. In the experimental group, similarly failing students were taught a “growth mindset” – the simple idea that intelligence is not fixed, that “learning changes the brain by forming new connections, and that students are in charge of this process”. The classes involved the students reading through the following piece: 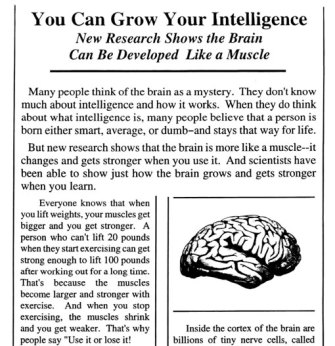 New research (Gunderson et al, 2013) demonstrates that parents who gave their 14 to 38 month old babies praise focused on effort rather than ability, found their children’s attitudes to intelligence five years later were more likely to be positive rather than fixed. A likely explanation is that parents continue influencing their children’s mindset as they grow up through the first five years. This is the first research that has looked at the impact of parent’s praise on their children over the long term and in the real world (outside the laboratory). Thankfully, as the children got older, most parents begun the switch from statements such as “good girl” or “you’re so smart” to statements such as “good throw” or “you’re doing a good job”: 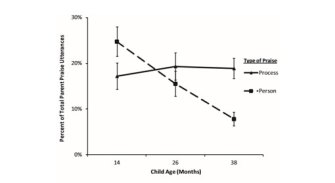 Worryingly though, parents are more likely to give the kind of praise that leads to a fixed mindset to girls than boys and a great deal more likely to give boys the kind of constructive praise of effort that will lead them to have a “growth mindset” and believe their intelligence is malleable (see below), a finding that feminist groups might be interested in. As expected, boys were found to end up with less fixed beliefs about intelligence than girls. 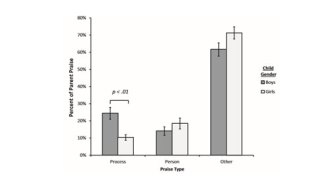 Another recent study has demonstrated that a mother’s praise to their ten year old child affects the child’s motivation and ideas about intelligence six months later (Pomerantz and Kempner, 2013, behind paywall but click here for automated PDF email delivery from the author). In this study however, mothers reported that they praised their ten year old children for their intelligence more often than for their hard work, a worrying finding.

The effect is not limited to children, the same findings have been found in adults (Wood and Bandura, 1989) where once again, not only does mindset predict success but an individual’s mindset and rate of success can be manipulated with only a few simple misguided words. In this experiment graduate students were given a simulated business management task which they were told involved decision making which “reflects the basic cognitive capabilities that people possess. The higher their underlying cognitive-processing capacities, the better is their decision making”. Another group was given the same task but was told that “decision-making skills are developed through practice. In acquiring a new skill, people do not begin with faultless performance. However, the more they practice making decisions the more capable they become”. The researchers found the same finding that has been demonstrated in children, people who were led to believe that their ability is fixed got poorer at the task over time, while those that were told they had the ability to improve were found to do so.

Adding yet more weight to the evidence, are brain studies (Moser et al, 2011; Mangels et al; 2006) which show that individuals with a fixed mindset (who agree with statements such as “You have a certain amount of intelligence and you really cannot do much to change it”), fail to pay attention to mistakes and learn from their errors. This is demonstrated by the findings that brain activity is reduced when these individuals are shown their errors and that these same individuals fail to correct their errors when given a follow up test.

Dweck’s book titledMindsetprovides a guided tour of her research and a range of strategies and real life examples of how our mindset may influence our lives and the lives of those around us. One recurring theme is how individuals who believe intelligence is fixed will tend to resort to strategies such as deceit and blaming others, while those who believe in a “growth mindset” will tend to focus on learning from their mistakes. A full 40% of the students who were praised for their intelligence in Dweck’s 1998 study proceeded, with no prompting, to lie about their scores to other students!

“What’s so alarming is that we took ordinary children and made them into liars, simply by telling them they were smart” – Carol Dweck

Another recurring theme is how individuals who have a fixed mindset will believe that “effort is only for people with deficiencies… if you have to work at something, you must not be good at it”. The evidence that this is not the case is all around us, much of Dweck’s book is made up of case studies of examples such as Mozart, Darwin and Edison – people who we might think of as being born talented due to folklore but who actually worked extremely hard, in a nurturing environment, before they achieved what they did.

Carol Dweck’s recent lecture for the RSA is on Youtube, you can also download the MP3 here, it is about half an hour long with another half an hour of questions, file it under unmissable lectures.

Women have made incredible gains into STEM fields, but they continue to face gender biases in the workplace.
Up Next

Rules of Engagement: Lessons from Lessons

When Fast Company came out with its 96 lessons for 2013 from leaders across the business spectrum, I expected to find a stereotypical list of lifestyle changes and recommendations for […]