Eaten any cheese lately? It was probably made with genetic engineering. Anything with sugar in it? Good chance that was made with genetic engineering too. Anything with ingredients containing corn? Soy? Any pork? Chicken? Beef? Yup, somewhere along the food chain between the farm and your fork, biotechnology was probably used to produce a lot of what you eat. And none of those products were labeled. Should they be? And if so, how? It’s a stickier business than it first seems.

More than 15 years of study on this massive human exposure to genetically modified (GM) food has turned up ZERO evidence of harm to human health, according to every major national science panel that has reviewed all the research. But the folks opposed to genetic modification food deny that evidence, claim there is a risk (or at least that a lot remains unknown), and hope to kill off the whole technology by demanding that such foods be labeled.

Easy to say. Incredibly hard to do. Consider;

The list goes on. (Mother Jones has a decent summary here.) By some estimates 60 -70% of the foods we eat in the United States contain ingredients produced, somewhere along the line, with genetic engineering. But in most cases there’s no difference…down at the molecular and atomic level…in what we’re actually eating.  A label might identify the difference to your brain but the rest of your body can’t tell.

So should it all be labeled…what some refer to as a ‘process-based’ standard…so that if biotechnology had anything to do with producing the food at any point, the label has to say so? That’s what the most adamant opponents of the entire idea of genetic engineering want.

Or should the standard be ‘content-based’…just label what’s in the box or bottle…what we actually eat? That’s what most governments require that have any rules on labeling at all. 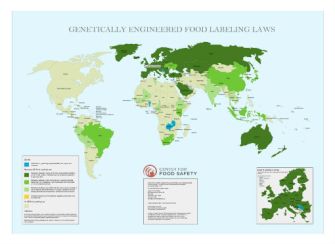 But even that gets sticky. And honey is an example. The Europeans require labeling of any food that contains more than .9% GM ingredients. Bees produce honey that is, at most, .5% pollen. But, sensitive to GM opponents, the European government recently decided that pollen is a natural part of honey, not an ingredient, and so ALL honey produced by bees that may have fed on GM plants has to be labeled.

Food production is a complicated, messy system. Labeling is easy to call for, but hard to actually work out.

But the interesting thing about this whole labeling fuss is that it has practically nothing to do with the food itself; not with it’s safety, or it’s taste, or it’s quality. The details of what to label, and what the label should say, and whether to label in the first place, are really just skirmishes in the larger battle over genetic modification and biotechnology generally. Those supporting labeling make the appealing case that consumers should have a right to choose, but even a consumer who reads the labels (most of us don’t) and really studies the issue before buying that box of corn flakes (who’s going to do that!?) is still not going to have much of a clue what the label means.

Labeling proponents are GMO opponents, plain and simple. They hope the label will scare people away from the technology, and kill it, because they don’t like things that aren’t natural. They’d don’t like the products and processes that produce profits for big companies. They don’t like the technological tools that empower modern mass agriculture. These values are neither good nor bad, but they are values…feelings…the subjective emotions at the heart of this whole debate. And those deeply held values are not going to go away.

Which is why companies at all levels of the food production system – from the seed companies and the raw material processors to the retail product manufacturers and the food stores themselves –  should support GM labeling and thereby defuse the whole distracting debate on which their opponents have staked their case. They should agree to open democratic discussion to establish honest labeling standards and language, beyond the half-hearted and self-serving proposal from the Grocery Manufacturers Association that is sure to go nowhere (The Safe and Accurate Food Labeling Act). With a little courage and foresight, the food industry could begin to remove this costly impediment to the application of a body of knowledge that could make them lots of money, and do hundreds of millions of people a lot of good.

In mice, the answer seems to be yes: Recent studies reveal improvements in memory and brain cell growth in older mice who received blood or plasma from younger mice.