“Revolutionize the way we use air” is all that the team behind Windcatcher wants to do. Ryan Frayne, the inventor of the device, was inspired when he watched his brother try to inflate a simple floating toy at the beach and quickly give up after a few breaths (haven’t we all been there?). He was sure there has got to be a better way to do this inflating business. So he went on, did some research, and developed the Windcatcher – a revolutionary inflation technology. The first product that features it raised over $50,000 on Kickstarter in just 8 days.

The Windcatcher valve allows you to inflate an entire sleeping mattress with just a few breaths, requiring no power or pumping. Each time you blow into the valve, the fast moving air stream from your mouth draws in the surrounding air, greatly amplifying your every breath. The science behind it is that when you blow into the Windcatcher you create a stream of fast moving, low pressure air. Because it has a higher air pressure, the surrounding air is sucked into the low pressure air stream. As a result, the air entering the Windcatcher is at least 10 to 15 times greater than the air you expelled from your lungs! 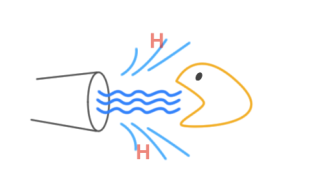 The first product featuring the valve is a specially designed sleeping mattress – the Windcatcher Air Pad – that you can inflate, deflate and pack up easily. Since the valve never touches your mouth it is also completely sanitary. The special technology holds the air as you inflate and allows for instant deflation.

The creators hope that their invention will foster innovation and inspire many new products. For example, huge reusable rescue buoys inflated by scooping up the air outside a fast moving helicopter, for marking the location of survivors in the water, when conditions prevent smoke signals from being used effectively; inflatable tents and dome structures; inflatable backboards for rapidly evacuating an injured person from the field.

I personally would like to see the valve on balloons – revolutionizing party preparation!

The first batch of Air Pads have already been produced and shipped. And Here’s the kickstarter demo of the Windcatcher valve and Air Pad.

Climate activists’ brand of iconoclasm is far removed from the Beeldenstorm that swept medieval Europe.
Up Next

Is This Both the Smartest and the Dumbest Generation?

So I’m teaching a seminar this semester on Technology, Biotechnology, and Democracy. Its balanced effort, of course, will be show how technology makes our lives both better and worse, as […]