Seven years ago, FEMA was a four letter word. Public faith in the Federal Emergency Management Agency was decimated by the agency’s poor response to Hurricane Katrina. President Bush praised FEMA Director Michael Brown four days into the storm – “You’re doing a heck of a job, Brownie” – but as the body count and chaos on the Gulf Coast quickly grew, faith in FEMA plummeted and a week later Brown, commissioner of the International Arabian Horse Association before taking the FEMA job, was taken off Katrina duty. Three days later he resigned.

Superstorm Sandy has helped remind us of how far FEMA has come since those dark post-Katrina days.When New Jersey Governor Chris Christie and Virginia Governor Bob McDonnell and several other governors and mayors of both parties praised President Obama for his fast and competent response to the storm, they were mostly praising FEMA, which is no longer the organization whose poor performance in Katrina set it up as an ideal whipping boy for the simplistic ideology of ultra conservatives who believe it is always a good idea to to shrink government at any level, especially at the federal level, and let the free market run things.

Mitt Romney was picking on the post-Katrina FEMA during the primary when, asked about the agency, he adopted the politically popular arch conservative mantra and said “Every time you have an occasion to take something from the federal government and send it back to the states, that’s the right direction.” “And if you can go even further, and send it back to the private sector, that’s even better.”

Actually, as many have observed these past couple days, FEMA clearly demonstrates that such a view of government is simplistic, and that there is a need for the kind of coordination and resources only a federal government can provide. Mitt Romney, known to readily point his political weather vane in the direction of the prevailing winds, has flipped on this issue too and now, post-Sandy and with a week left before the election, recants his earlier more conservative position and claims to acknowledge the more complex moderate truth; “I believe that FEMA plays a key role in working with states and localities to prepare for and respond to natural disasters,” “As president, I will ensure FEMA has the funding it needs to fulfill its mission…” That’s a far cry from the budget Romney’s Vice Presidential candidate Congressman Paul Ryan proposed, which would slash FEMA’s budget.

Certainly the old FEMA provided fodder for conservative ‘shrink the government’ budget-cutters, and certainly the public had lost faith in the ability of this vital agency to do its job; to help mitigate disaster risk, to plan for disaster response, and coordinate and support the work of state and local first responders who actually do the public safety work when disasters strike. But why have things changed? How has an agency that was so recently mocked regained at least some of the public trust washed away by Katrina?

The story of FEMA’s turn around teaches another important lesson about government. Behind all the controversies and politics and screw-ups, the stuff about government that makes the headlines and shapes what most of us know, there are a lot of civil servants who really care about trying to do a good job. They really do care about serving the public well, and many of them are actually quite good at it. I happen to know one at FEMA, Rich Serino. Richie is precisely the kind of person you want in a position vital to helping keep you safe.

Rich is the Deputy FEMA Administrator, the number two person at the agency who has been at the President’s side through all of this (literally his right hand man in this photo). 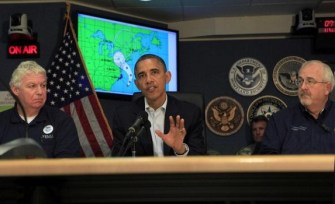 I got to know him back in my TV reporting days when he was an EMT in Boston and we’d cross paths at all sorts of shootings and car crashes. He then went on to help create and then lead Boston’s Emergency Services Department, a national model. There wasn’t a news person in Boston, nor public safety official, who didn’t admire Richie for his competence, his honestly, his utter lack of ego, and his genuine commitment to caring for people, from a single patient in the back of an ambulance racing to the emergency room to the entire public of the city of Boston

This will all embarrass Richie greatly (note what I said earlier about his lack of ego), but I share it because Richie Serino, and his boss, FEMA Administrator Craig Fugate, and thousands of others at FEMA (and across government), do in fact really care about serving the public well and have the skills to do so. And Fugate and Serino have been appointed to run an agency critical to public safety not principally for their political connections, as was the case with Michael Brown, but for their competence, both as emergency managers and as leaders (Fugate previously ran the Florida Division of Emergency Management). That, more than anything, is what helped FEMA reestablish itself as a more trusted and respected organization. Government can certainly be incompetent, sluggish, frustrating, and inefficient. But with committed competent people in decision making positions, the many committed competent people in all sorts of government jobs and agencies can also often be able, responsive, and effective.

The front line heroes  – the police and firefighters and emergency medial responders who put their lives on the line for us, – are easier to see. Less obvious are the legions of people who our tax money pays to serve us, and who do it faithfully, and well, and not infrequently at significant personal sacrifice. (The US Postal Service, another favorite whipping boy of the right, delivered the mail in New York during the storm.) The difference between Katrina-FEMA and Sandy-FEMA should offer even the most arch conservative…and all of us…an important reminder, that while we appropriately denigrate government’s many flaws, we should also remember to appreciate that government is US, and does an awful lot pretty well, and plays a vital role in protecting and enhancing our right to life, liberty, and the pursuit of happiness.

“Ocean-Grabbing” A Threat To Developing Nations

Richer countries attempting to keep up with demand by fishing the waters of poorer countries need to rein it in, according to a newly released United Nations report.