How do you transform factory era school systems so that they better serve the needs of an information age society? You don’t do it by being timid. 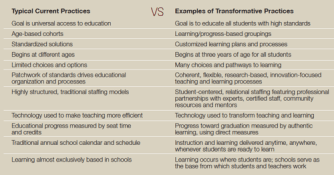 Read the full report. See what a different education system could be. Share your thoughts in the comment area!

Unlike other world rulers, Genghis Khan was laid to rest not inside an elaborate mausoleum but an unmarked grave somewhere in Mongolia. Maybe.
Neuropsych

What’s one of the most reliable indicators that a first date is going well? The answer might lie in how closely the couple is matching each other’s behavior and physiology. […]
Up Next
Politics & Current Affairs

Income inequality in the US is at the highest level in our history. How are private interest groups able to control the conversation and when will consumer-advocates show up to the fight?