It took a while, but the scientists who study global warming have finally started applying the findings from scientists who study risk communication to the challenge of raising public concern about one of the greatest threats humans have ever faced. Some atmospheric chemists and climatologists and economists have belatedly come to appreciate that trying to influence how people feel about a risk is not simply a matter of teaching them the facts. It’s about presenting those facts in the emotional language most relevant to why people find those facts more worrying, or less, in the first place.

Which makes some new research findings on climate change and emotions important for anyone interested in the issue specifically, or in science and risk communication generally. The Role of Emotion in Global Warming Policy Support and Opposition from the Yale Center for Climate Change Communication sampled public opinion about global warming, and asked respondents about which specific emotions they felt as they thought about policies to combat climate change. Instead of just asking people how they felt, as most surveys do, this one tried to figure out WHY.

And this survey went beyond the common assumption that support for or opposition to climate change policy is predicted by whether are you liberal or conservative. It also went beyond the assumption made by Cultural Cognition research, that it’s not people’s political ideology but their underlying worldviews about how society should operate that predict views on global warming. Cultural Cognition identifies people as either Individualists (people who prefer to live in a society that allows more individual choice and less government) or Communitarians (people who prefer a ‘we’re all in this together’ sort of society, who support more government), Hierarchists (people who prefer a traditional society defined by a rigid hierarchy of social and economic class and who don’t like government butting in and leveling the playing field) or Egalitarians (those who prefer a more flexible fair society where opportunity is not restricted by class, and who support government butting in to level the playing field.) Cultural Cognition research has found that Individualists and Hiearchists are more likely to deny global warming and oppose action to combat the problem. Egalitarians and Communitarians are more likely to believe the evidence and support action.

The survey asked people the standard questions about political ideology and cultural group affiliations. But it also asked them what specific emotions they felt when they thought about climate change. Here is how the strongest emotions ranked; 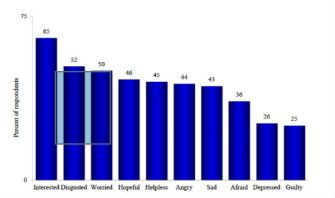 It turns out those emotions were stronger predictors of whether people supported or opposed various climate change policies than people’s politics or their cultural/group affiliations. “Worry” was the strongest predictor of support for policies like support for renewable energy, regulating CO2 as a pollutant, or a 25¢/gallon gas tax). “Disgust” was the strongest predictor for people who opposed those policies. In other words, if people feel worry or disgust about the global warming issue, those emotions predict whether they will support or oppose doing something about the problem more than their political ideologies or cultural affiliations

There was another important finding too. The emotion of “fear” was NOT strongly associated with those who want action taken. “Worry” was, and the feelings of “Hope” and being “Interested”. But not “fear”. That is profoundly important for all the risk communicators out there trying to get people to care about global warming by scaring the bejeezus out of them. (Which still includes many climate change scientists, most environmentalists, and documentaries like the recent Showtime series “Years of Living Dangerously“.)

There are a couple important caveats to these new findings. Other cognitive research has found that when we say we feel worry or fear or disgust, or any emotion, we are just giving a conscious semantic label to instinctive biological responses triggered by some stimulus. Fractions of a second after that stimulus sets those biological responses in motion, we become consciously aware of how those initial responses make us feel, and we give those feelings names. So, for example, an Egalitarian/Communitarian might say they ‘worry’ about climate change, but it’s the underlying cultural group affiliation that has been triggered by thinking about global warming that causes them to express that emotion.

But caveats aside, what this new research clearly says is that risk communication that wants to shape how people feel about global warming, or any risk issue, must go beyond simply communicating the facts. It must respect the primary role that feelings play in how we see those facts. It must identify, with research, the particular emotional and instinctive characteristics that shape people’s feelings about the issue, and present information in ways that will resonate with those underlying emotions. Any climate change communicator who ignores that truth and thinks that just educating people is enough, is ignoring what an important and growing body of research tells us about the best way to get people to care, and act, about this immense threat to human and environmental health.

(The image at the top comes from 6seconds.org.)

IBM and USAA have joined forces to introduce supercomputer Watson to veterans in need of guidance as they transition back into society.