Italy, says Joseph Luzzi, is a chiaroscuro nation – a land of sharp contrasts. Luzzi, the director of Italian studies at Bard College and the award-winning author of The Blessed Lens: A History of Italian Cinema, calls Caravaggio – the “incarnation” of Italy’s dualistic spirit. Caravaggio’s works are characterized by chiaroscuro effects – dramatic contrasts between light and dark with little transition between. And the man’s personal life, filled with sensational acts of violence, stands in stark contrast to the emotional sensitivity and technical precision of his work. 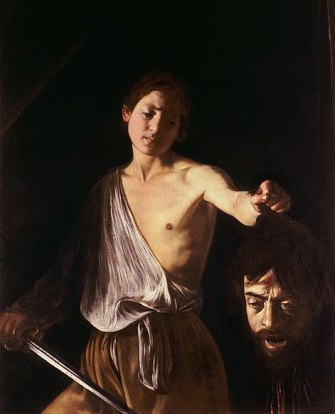 The painting above captures not only the light/dark dualism for which Caravaggio is famous but also the seeming paradox that lies at the heart of his life and work – and, according to Luzzi, at the heart of Italian culture. It depicts the moment in the Old Testament tale after David, the future King of Israel, has beheaded the giant Goliath. Note the expression on David’s face as he gazes at the severed head in his hand – one of pained empathy rather than triumph. Goliath’s face, too, is contemplative rather than defiant. Taken as a whole, the scene treats violence as both tragic and inevitable.

Readers – Do you see a contradiction here? Are violence and empathy opposites?

In the seething cesspool of Caravaggio’s Rome, violence was a form of advertisement; it let people know you were, so to speak, the wrong guy to f#@k with. Internationally renowned art critic Andrew Graham-Dixon revisits Caravaggio’s life as a kind of model for career success in tough times.