The folks on Reddit don’t have a lot of credibility these days, so we tread with caution in sharing this image, which may indeed be a fake. According to one Redditor, the picture, which is of a science quiz called “Dinosaurs: Genesis and the Gospel,” was administered at a private religious elementary school in South Carolina. The student who filled it out has received a score of A+ for answering questions like “The Earth is billions of years old” by answering “False.”

There are certainly a lot of things fishy about this image. We have been unable to identify whether it is an authentic quiz or a fake. What do you think?

Here is the full image: 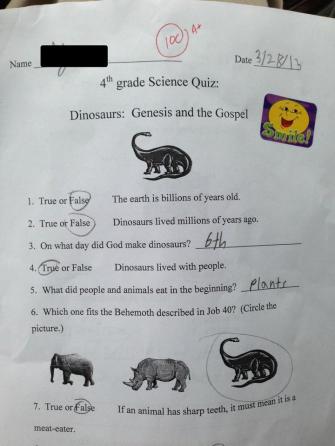 There are different types of atheism and atheists. In general, they can be classified as the non-religious, the non-believers, and agnostics.
Up Next

Flipperbot, the robot in the video below, was designed to test how sea turtles and other real-life organisms move outside the water.