The Pervasive Threat of Conformity: Peer Pressure Is Here to Stay

The Asch effect has been replicated successfully numerous times, in a variety of contexts, and each time, peer pressure glows strong. 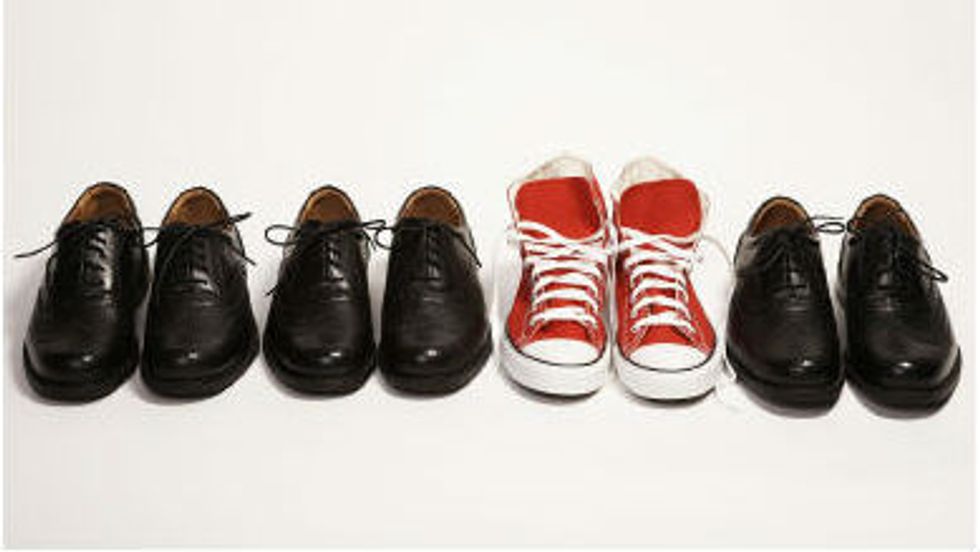 Today, I’d like to revisit one of the most well-known experiments in social psychology: Solomon Asch’s lines study. Let’s look once more at his striking findings on the power of group conformity and consider what they mean now, more than 50 years later, in a world that is much changed from Asch’s 1950s America.

How long are these lines? I don’t know until you tell me.

In the 1950s, Solomon Asch conducted a series of studies to examine the effects of peer pressure, in as clear-cut a setting as possible: visual perception. The idea was to see if, when presented with lines of differing lengths and asked questions about the lines (Which was the longest? Which corresponded to a reference line of a certain length?), participants would answer with the choice that was obviously correct – or would fall sway to the pressure of a group that gave an incorrect response. Here is a sample stimulus from one of the studies:

Which line matches the reference line? It seems obvious, no? Now, imagine that you were in a group with six other people – and they all said that it was, in fact, Line B.  Now, you would have no idea that you were the only actual participant and that the group was carefully arranged with confederates, who were instructed to give that answer and were seated in such a way that they would answer before you. You’d think that they, like you, were participants in the study – and that they all gave what appeared to you to be a patently wrong answer. Would you call their bluff and say, no, the answer is clearly Line A? Are you all blind? Or, would you start to question your own judgment? Maybe it really is Line B. Maybe I’m just not seeing things correctly. How could everyone else be wrong and I be the only person who is right?

We don’t like to be the lone voice of dissent

While we’d all like to imagine that we fall into the second camp, statistically speaking, we are three times more likely to be in the first: over 75% of Asch’s subjects (and far more in the actual condition given above) gave the wrong answer, going along with the group opinion.

What was happening? Peer pressure, it seems, won over simple visual perception. The tests weren’t hard; in the control groups, hardly anyone ever made a mistake. But there was something about being the odd man out that caused intelligent, well-educated subjects to go against their better judgment – and then to justify their behavior in very creative ways.

However, there was an important caveat. If at least one other person in the group said the correct answer, the rate of conformity dropped off steeply. All it took was that single voice of dissention, and lo and behold, the participant was ready to join in. He wouldn’t, however, do it alone.

Moving beyond lines: conformity in the social networking age

The Asch effect has been replicated successfully numerous times, in a variety of contexts, and each time, peer pressure glows strong. It’s not surprising, given that Asch’s stimuli were about as straightforward as they get. If I can get you to doubt the length of a line, when the answer is staring right at you from the page, imagine how much easier it would be to get you to doubt something more complex, something where the shades of grey are much more believable, the “correct” answer far less straightforward.

And in that greyer, more nuanced world of ideas, no longer of simple lines, what would the ramifications of conformity to peer pressure be? On the one hand, one could argue that the effect would go away. There are more opinions, more places to find them, a greater chance that you won’t be the lone voice of defection, isolated against a united group, and that you’d therefore stick with what you, in the privacy of your pre-group mind, had already decided.

However, what about those groups that aren’t the anonymous masses of the internet but rather your actual friends, your peers, those that you share with at an ever-increasing rate on Facebook, Twitter, or wherever it is you go to share? Don’t their opinions hold more sway? And would you be as likely to speak out if you were to find a unified front on the other side of the issue? With the launch of Google+, that question is even more relevant: now that you can create “circles” of users in very specific niches, isn’t it even more unlikely that you would disagree? Think: how powerful is the first person to express an opinion in that setting? And how is that likely to shape the thoughts of the others in that group? And what about ripple effects?

The influence of groups in everyday life

In fact, I don’t even have to go online to see it in action. Take the world of academia, the ivory tower where you have the most educated minds, those that would be most inured, it would stand to reason, against the pernicious influences of peer pressure.  This is a world that is predominantly liberal, in the political sense of the word. The conservatives are few and far between. And I know many an individual who would never dare express a view that might betray anything other than an overwhelming liberal bias in this group of peers. Especially a student or someone who has yet to get tenure. The motto seems to be, for the most part, get tenured first, express dissention later (if at all).

And are they wrong to be quiet? The prominent conservatives, like Harvey Mansfield, are pilloried on a regular basis, their words taken out of context, distorted, made to seem callous and villainous. Except Mansfield, of course, has tenure at Harvard. He doesn’t care. But he didn’t care far, far earlier, and I love him for it.

I’ll go a step further. I’ve often been on the wrong side of the political argument—I don’t identify with either party and take the issues as they come—and not once have I dared object to senior faculty when I have felt they were saying something ridiculous, stupid, or even potentially dangerous, coming as it was from someone with such widespread influence and authority. Not a single time did I dare argue; no one else did, and there was too much at stake.

There are those lone souls, whom I admire to no end, who are different, who will be the sole voice of opposition no matter the costs. I’d like to think I’d be one of them if something mattered enough. But it’s tough. And I don’t see it ever getting any easier.