Rates of crime and recidivism in America are very high. One Cleveland-based French restaurant, however, leads the way in helping ex-cons to thrive and not reoffend after their sentences. 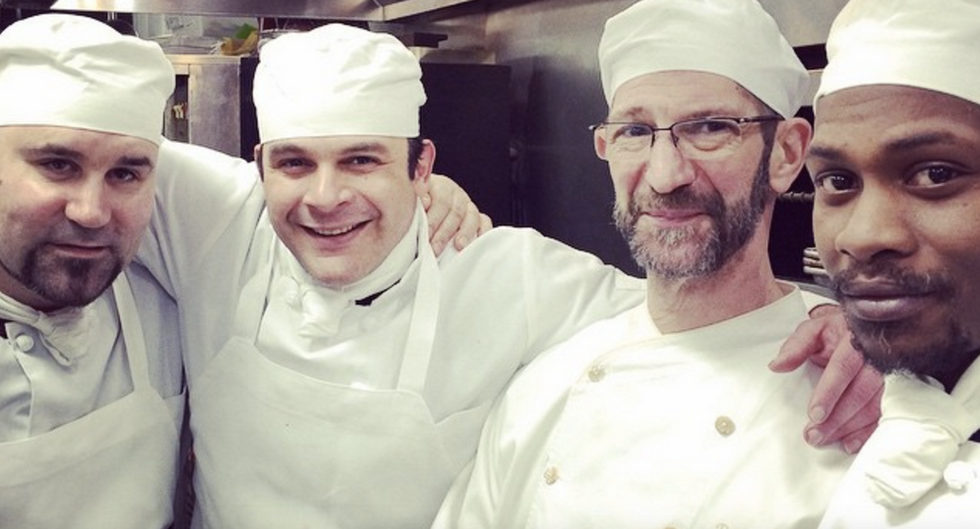 Of the 200+ former inmates who have trained as cooks at Edwins over the last few years, none has reoffended. The Cleveland-based French restaurant is reportedly the only American high-end restaurant to employ ex-offenders for a majority of their staff. And the food they serve is top-notch. For example, writer Douglas Trattner wrote in Cleveland Scene:

I'll admit that I had my doubts. It's one thing to train ex-cons to work the dining room of a meat-and-three cafeteria, or secret them away in the prep kitchen of a high-end establishment, but Chrostowski is steadfast about fully and unapologetically integrating his charges into all aspects of his fine French bistro. And sure enough, he's done it, birthing one of Cleveland's best new restaurants on the backs of "un-hirable" ex-cons.

Employers willing to hire people with criminal records are hard to come by in the United States. In October 2015, CNN cited a survey finding that over three quarters of former prisoners found employment to be nearly impossible. Seth Ferranti, once an inmate himself, corroborated this result in an article for VICE. He describes how he lacked work experience after 20 years in prison and he explains on his applications that he has been convicted of a crime. He applied at a restaurant after being connected through a friend of his who knew the kitchen manager. After a solid phone interview, he recounts:

The kitchen manager wasn't there, so I left the application and went home. He followed up via phone and hired me, telling me I could start the next day and detailing the clothes I'd be expected to wear for the job.

I was excited—it was my first gig in a long time.

But an hour later, the manager called back and told me he couldn't go through with it. Of course, he didn't say it was because of my felony conviction, but I knew what the story was. I had been honest and explained that I'd just been released from prison, and he seemed cool with it, but apparently one of his bosses felt differently. I felt totally discriminated against, but this type of stuff happens to ex-cons every day.

Even when all else goes without a hitch, having a criminal record works strongly against individuals pursuing employment.

This is troublesome given the alarming rates of imprisonment and recidivism in the United States. As Michelle Ye Hee Lee confirmed in The Washington Post, America has less than 5% of the world’s population and nearly a quarter of the world’s prisoners. Furthermore, the recidivism rate in the US is 60%. In contrast, Australia, Singapore, and Norway all have recidivism rates under 30%. In this context, barriers to employment exacerbate existing problems with the American punitive system.

Of course, employment is not the only problem facing American ex-offenders. Michelle Alexander refers to the treatment of criminals as “legalized discrimination" in her book The New Jim Crow: Mass Incarceration in the Age of Colorblindness. She notes in her introduction that this discrimination affects not only ex-cons’ employment but also their housing, education, rights to vote, and public welfare benefits.

So what are prisons in countries with fewer criminals (and fewer repeat offenders) doing differently? In Norway, which has the world’s lowest recidivism rate, they are treating prisoners more humanely. Business Insider reports on two Norwegian prisons, which have access to the outdoors, minimal use of bars, and kitchens stocked with normal equipment – knives and all. The operating theory is that if you treat people like animals, that's what they will become.  "Americans want their prisoners punished first and rehabilitated second," criminologist Bob Cameron says to Business insider. Unlike the punitive aims of American prisons, the Norwegian penal system aims to place offenders in a secure and healthy environment in which they can “normalize” with the aim of helping them to reintegrate into society after their sentence. In other words, the prison-system is designed to help criminals thrive, succeed, and not reoffend.

Overturning the American penal system from a punitive to a normalizing one is no small task. However, the story of Edwins restaurant, where none of the hundreds of once-convicted employees have reoffended, shows that individuals can help to transform the institutional forces by acting without prejudice toward those with criminal records.