Has Science Conquered Metaphysics, and All of Philosophy?

What - if anything - makes metaphysics still relevant? And what's the relationship between science and metaphysics? 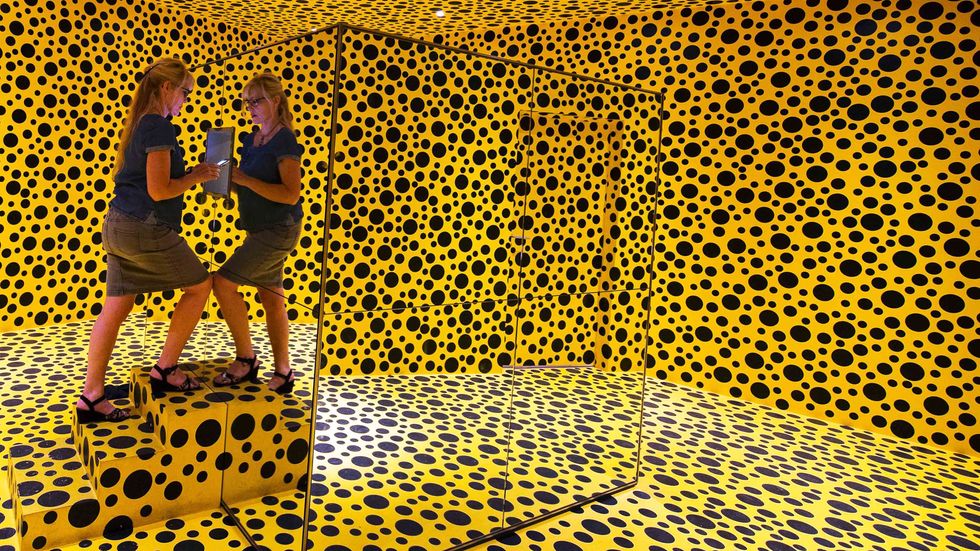 A visitor checks an art installation entitled 'Mirror Room (Pumpkin)' by Japanese artist Yayoi Kusama, part of the In Infinity art exhibition at the Moderna Museet, the Museum of Modern Art on August 31, 2016, Stockholm. (JONATHAN NACKSTRAND/A

In the 1930s, a group of scientists and philosophers set out to destroy metaphysics. The so-called Vienna Circle accused metaphysics of being made of “pseudo-statements," that is, a string of words that looks like a statement at first glance, but turns out to be completely bogus after more careful scrutiny.

Yet almost 90 years after the Vienna Circle—and over 2,000 years after Aristotle wrote the Metaphysics—the field doesn't seem to be going anywhere. Some of its “pseudo-statements" may have been refuted by science in the meantime, but there are still many profoundly metaphysical questions that remain unanswered: What is consciousness? Do we have free will? Why is there good and evil? Until we've answered them, metaphysics can make a legitimate claim to the pantheon of human knowledge.

The literal meaning of the word “metaphysics" is “the ones after the physical ones." This is what an editor of Aristotle's work called the books which followed what we now call Aristotle's Physics. The Stanford Encyclopedia of Philosophy notes that the title was probably meant to warn students of Aristotle's work that they should read the Metaphysics only after they've grappled with the Physics.

But Aristotle himself did not see Metaphysics as coming second—if anything, for him it was at the beginning of everything. While Aristotle himself never used the term “metaphysics," he referred to it the “first philosophy" or “first science." Metaphysics came before everything else because it dealt with the first and most fundamental principles of life.

But if metaphysics comes before physics, does that mean that the role of metaphysics is to inspire questions that we can later test in the physical world?

Some scientists (and philosophers) have claimed that science either already holds all the answers to metaphysical questions—or will soon do so—and that science, therefore, renders metaphysics useless. It's not just the old Vienna Circle that deemed metaphysics pointless, but more recent public figures, such as Stephen Hawking or Neil deGrasse Tyson, seem to treat metaphysics with similar disregard.

In A Big Think video, Bill Nye, our favorite science guy, refers to some of the fundamental questions about consciousness when he quips “Drop a hammer on your foot and see if you don't notice it." But questions such as “What is consciousness?" and its corollaries referenced by Nye (“How do we know that we know? Are we aware that we are aware? Is reality real?") have not yet been fully answered by science. Even if we do agree that everything will ultimately be explained by science—a view some might deem scientist—we might still benefit from the intellectual freedom that metaphysics has to offer.

Of course, science has come up with beautiful explanations for many of the fundamental questions of metaphysics. Neuroscience can help us locate where in the brain occurs what is philosophically known as “the theory of mind." Experiments using brain imaging techniques suggest that our decisions are made for us long before we think we made a choice, and the concept of “free will" is severely challenged. A scientific look at our fellow primates explains how morality may have come about, helping us decide if humans are fundamentally good, bad, or a combination of the two.

But, as any good scientist will know, answers only breed more questions. While science is helping us get closer to an answer, metaphysics helps us question that very answer once we have it. The deepest problems of metaphysics are still relevant, at least until science will have come up with a complete “theory of everything." Until we have managed to reconcile quantum mechanics with relativity, we cannot say that we have the one and only accurate description of reality. Until we are able to integrate the hard problem of consciousness into our explanation of reality, we are not justified to mock those who wonder what is real. And until we have answered these questions, we are free to ask: what is reality?

Metaphysics provides a safe space for intellectual exploration, a blank canvas where human curiosity can freely express itself. At the beginning of each scientific process there is a fundamental question, which is usually metaphysical in nature. As some have put it, “science presupposes non-scientific knowledge," and it is the role of the “first philosophy" to investigate these non-scientific presuppositions.