The Opponent: How Bill McKibben Changed Environmental Politics and Took on the Oil Patch 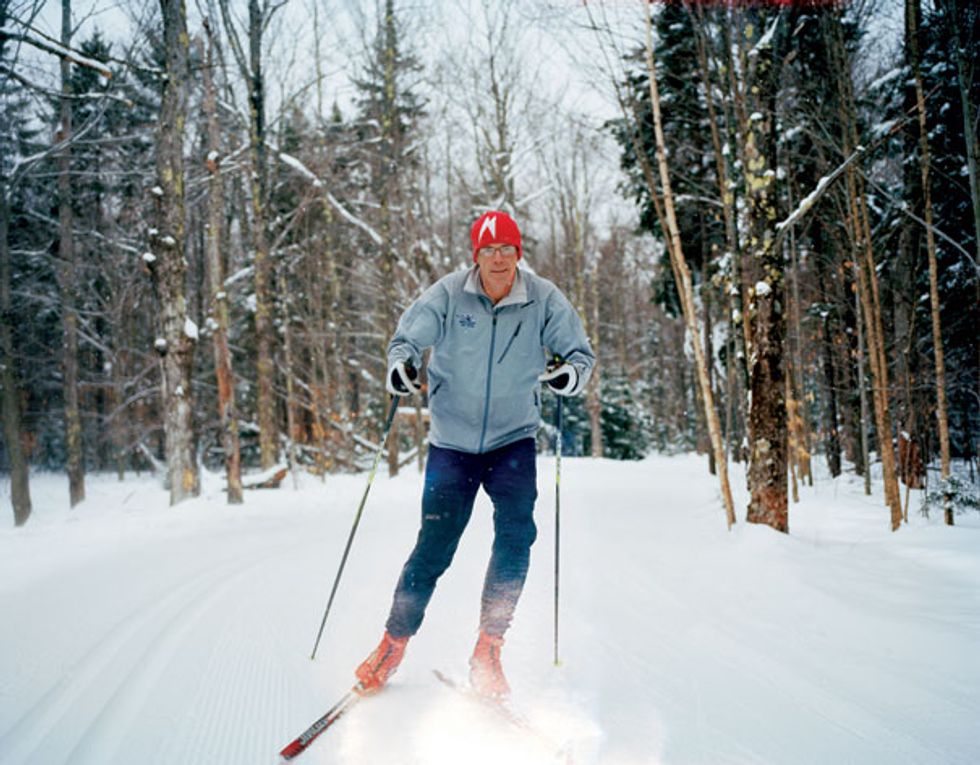 For the May/June issue of Canada’s Policy Options magazine, I contributed an article adapted from my Spring 2013 Shorenstein Center paper examining the career of environmental writer and activist Bill McKibben.  With anticipation building over Obama’s pending decision on the Keystone XL pipeline, the article at Policy Options is the first in the Canadian press to focus on McKibben and the movement against oil sands development.  Other articles in the issue focus on the implications of climate change for the Canadian arctic.

Here’s how the article opens:

On a cold day this past February on the National Mall in Washington, DC, an estimated 30,000 people gathered to protest the Keystone XL pipeline, the controversial project intended to link the Alberta oil sands in Canada with Gulf of Mexico refineries and distribution centres in the United States. “All I ever wanted to see was a movement of people to stop climate change,” declared activist Bill McKibben, addressing the crowd from a stage. “And now,” he told them, “I’ve seen it.”

McKibben’s oil patch opponents in Canada may have derided the size of the crowd as smaller than expected, but the turnout was only a partial demonstration of the power this writer turned environmental activist has amassed against them. Through his writing and his grassroots activist organization 350.org, targeting fossil fuel industries, McKibben has emerged as a major obstacle for those in the Canadian government and oil sands industry who see the pipeline as key to getting the Alberta product to global markets.

He has melded his long, personal struggle to sound the alarm against the perils of climate change with pioneering methods of social protest, combining traditional face-to-face organizing strategies with the potency of social media and the storytelling ability of a bestselling author. In the process, McKibben has become the most visible environmental activist in the United States, redefining the way environmental groups practise politics and extending his influence into one of the biggest issues in Canada.

As I do in the Shorenstein paper, I discuss McKibben in the context of a new class of prominent public intellectual.  McKibben in particular has expertly navigated today’s fragmented and ideologically selective media system to promote his ideas and political goals.  Here’s the relevant section from the article.

Knowledge journalists in popular discussion remain loosely identified as celebrity authors who trade in big ideas, coin trends, drive book sales and inspire movements. Leading contemporary examples include the New York Times columnist David Brooks (author of The Social Animal), CNN/Timemagazine’s Fareed Zakaria (The Post-American World), the Nation’s Naomi Klein (The Shock Doctrine) and University of California journalism professor Michael Pollan (The Omnivore’s Dilemma). Yet the members of this new class of public intellectuals are also criticized for imposing their point of view; for lacking specialized credentials, or for reducing explanations to a single idea, theory or field. Sometimes, as in McKibben’s case, they are accused of blurring the lines between journalism and activism.

In the digital media landscape, however, highly motivated individuals can consume, contribute, recommend, share and comment on their preferred topics across preferred media outlets and platforms. This makes it very easy for an ideologically minded audience to follow only sites or blogs that reflect and confirm their opinions. They often prefer writers who advocate for their cause.

Meanwhile, specialized, not- for-profit news organizations, such as InsideClimateNews.org, which won a Pulitzer Prize for its coverage of a 2010 pipeline oil spill in Michigan’s Kalamazoo River, are emerging as important complements to traditional news organizations. Yet these foundation-funded operations also raise new questions about the boundaries between reporting and advocacy. One of the main backers of InsideClimateNews, for example, is the Rockefeller Brothers Fund, which describes its mission as advancing “social change that contributes to a more just, sustainable, and peaceful world.” It also funds McKibben’s 350.org.

McKibben has masterfully navigated this online media ecosystem through frequent contributions to the Huffington Post, TomPaine.com, Grist. org and other left-leaning Web sites. Similarly, his efforts on behalf of 350. org are frequently covered and discussed on these outlets and others such as InsideClimateNews and Mother Jones magazine. Over his career, McKibben has also been a regular contributor to a host of environmental, outdoors and religious magazines. The fragmented nature of online news that leads news organizations to focus on driving traffic to specific stories by way of search engines, aggregators and social networks heightens the prominence of popular knowledge journalists like McKibben.

Similarly, these dynamics can transform the original analysis or perspective offered by knowledge journalists from a piece of journalism into a noteworthy, if pseudo, event. McKibben has been able to use niche media to engage readers already concerned about climate change, even as it becomes increasingly difficult to capture the wider public’s attention for the problem, or to shift conservative-leaning news consumers away from media sources in the other ideological silo that reinforce their doubts about the science of climate change.

Here’s the conclusion from the Policy Options article, building on those offered in the original Shorenstein Center paper.

Having spent months studying McKibben’s books, writing and career, I hold a deep admiration for his ability to convey the urgency of climate change and to articulate a better approach to life that includes more time for family, reflection and nature. His work as an activist is equally impressive. From his start in 2006, working with a handful of college students, to his leadership today of 350. org, McKibben has helped shift the US environmental movement from an almost exclusive focus on insider lobbying, legal strategies and think-tank-style influence to focus greater resources on grassroots organizing and mobilization.

Yet as a public intellectual, McKibben has failed to offer pragmatic and achievable policy ideas. Instead, reflecting his intellectual roots in the deep ecology movement, McKibben’s goal has been to generate a mass consciousness in support of limiting economic growth and consumption, with the hope of shifting the United States toward localized economies, food systems and “soft” energy sources. I wonder how many of the people turning out to protest the Keystone XL pipeline, working on behalf of divestment, or following along on Twitter and Facebook are aware of McKibben’s long standing vision of societal change, detailed first in The End of Nature and most recently in Deep Economy and Eaarth.

In this pastoral future free of consumerism or material ambition, Americans would rarely travel and experience the world instead via the Internet; grow much of their own food; power their communities through solar and wind; and divert their wealth to developing countries. McKibben’s romantic vision of a New-England-style utopia seems to have blinded him to alternative approaches that may be not only more effective at curbing greenhouse gas emissions and providing for the material needs of large, diverse populations, but also more politically probable.

McKibben is perhaps at even greater fault for downplaying the need for “hard” technological approaches like nuclear energy or carbon capture and storage, and focusing instead on “soft” technologies like solar, wind and efficiency. His favoured technologies are unlikely to alter the dynamics of fossil-fuel energy use and dependency worldwide. Consider that globally, an estimated 1,200 coal power plants are scheduled for construction, three-quarters of them in China and India. Compounding the challenge, according to University of Manitoba energy analyst Vaclav Smil in his 2010 book, solar and wind energy sources are unlikely to be able to overcome the problems of intermittency, storage capacity and cost, and to be scalable in time to compete with coal power worldwide.

In other words, innovative technologies are needed that can not only power the mega-cities of Asia but also limit emissions from the thousands of coal plants already in place and scheduled to be built around the world. In advocating for nuclear energy, even McKibben’s long-time inspiration Hansen is blunt, saying on his Web site in 2011: “Suggesting that renewables will let us phase rapidly off fossil fuels in the United States, China, India, or the world as a whole is almost the equivalent of believing in the Easter Bunny and Tooth Fairy.”

In this case, it is useful to see the contrast between McKibben and evironmentalists like Stewart Brand and Mark Lynas, who have urged their peers to adopt a new outlook on technological innovation. Sharing many of the same political aims as McKibben over the course of his career, Lynas has developed a very different perspective about technology and humans’ relation to nature. In his most recent book, The God Species: How the Planet Can Survive the Age of Humans, Lynas argues that “we cannot afford to foreclose powerful technological options like nuclear, synthetic biology and [genetic engineering] because of Luddite prejudice and ideological inertia.”

In a recent essay titled “Wicked Polarization,” Michael Shellenberger and Ted Nordhaus describe progress on climate change and similarly complex social problems as obstructed by experts and public intellectuals who have “come to frame virtually every national problem as a consequence of the irrationality, ignorance, and immorality of the political Other.” In this light, arguments for action on climate change that evoke idealized visions of small-scale, hyperefficient agrarian communities powered by wind and solar reflect the priorities and values of environmentalists like McKibben, rather than a pragmatic set of choices designed to effectively manage the problem and align a diversity of political interests in support of compromise.

“The problem is not that we are in a post-truth age but rather that we have not learned to adapt to it,” Shellenberger and Nordhaus write. “Perhaps a good place to begin is by recognizing our own biases, perspectives, and agendas and attempting to hold them more lightly. Bringing an end to our ideological arms race will ultimately require that we force partisans out of their comfort zone by redefining those problems in ways to which partisans do not already know the answers.”

As a complement to activists like McKibben — and to the powerful voice of his oil patch opponents — we urgently need to bridge these polarized narratives around climate change. In our digital, algorithmic media culture we must find ways to hear each other, to listen as well as test our assumptions. And that begins by accepting that total victory for a single point of view is unachievable. “There is no kumbaya moment,” argued New York University’s Jay Rosen in a 2012 speech outlining ways to improve media coverage of wicked problems like climate change. “You never get everyone on the same page. What’s possible is a world where different stakeholders ‘get’ that the world looks different to people who hold different stakes.” The question that the Bill McKibbens pose to us, then, is not whether our fate lies in a choice between a mythologized pastoral past and apocalyptic visions of the future. It is whether our new media culture can be a path to the understanding of others, or force us even deeper into our ideological bunkers.