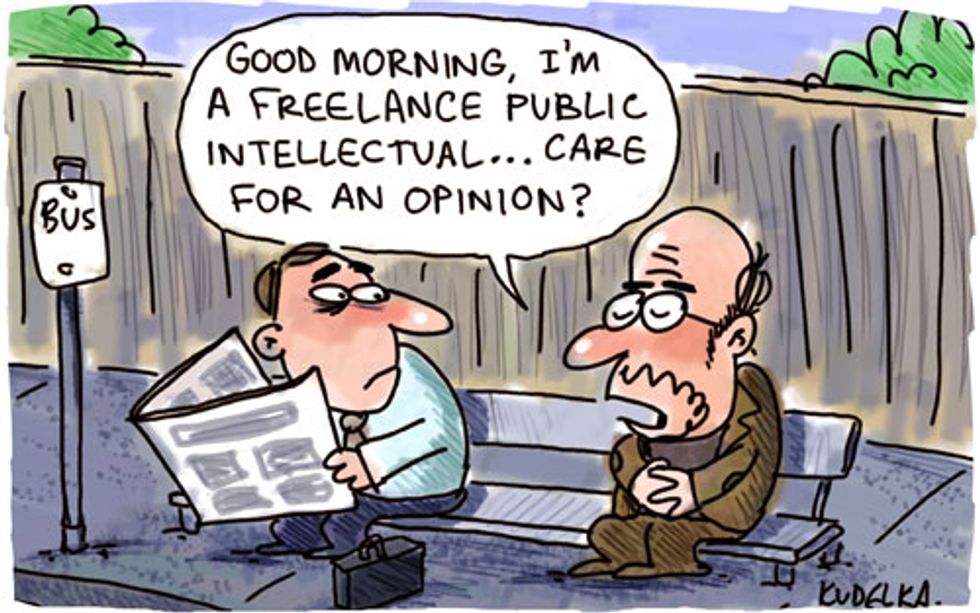 In Richard Posner’s much discussed 2001 book Public Intellectuals: A Study of Decline, he argues that public intellectualism in the United States has been deteriorating over the last decades and that this is due mostly to their academic overspecialization and lack of accountability. In Posner’s world public intellectuals should be independent thinkers who theorize on general matters of public concern rather than speak to an insular community of experts on very specific subjects, or worse, make pronouncements about the ‘wrong things’ or engage in the prediction mill.

If Posner is correct in asserting that today’s public intellectual is an overspecialized academic, it would seem reasonable to believe they are particularly accurate and insightful forecasters in their areas of expertise. However, according to Philip Tetlock’s study Expert Political Judgment: How Good Is It? How Can We Know?, most specialists perform worse in their forecasting of societal trends and political outcomes than if they simply assigned random outcomes to their predictions. Even in looking at predictions made only within their field of study, the experts were still no more reliable than non-specialists.

In a review at the Washington Post, Robert Boyton, on the other hand, regards Posner’s view as essentially anti-intellectual and incorrect in equating public intellectuals with a slightly higher level punditry, even if Boyton agrees with Posner’s central critique of the public intellectual’s lack of accountability. For Boyton, the public intellectual’s value lies in ideas and their contribution to society in the long term, even if they may not always be great predictors or manifest themselves in a linear pattern. Boyton in fact believes that the very reason why “the best philosophical ideas are so fascinating is that they are unpredictable.”

For those willing to enter the arena of public intellectualism, Amitai Etzioni provides his own ten commandments. He sets forth a vision where a public intellectual balances their willingness to illicit controversy and criticism, the number of subjects they address, and the audience they are hoping to reach. Etzioni sees the role as a “process” and cautions public intellectuals regarding their 15-minutes of fame. He recognizes the fickle nature of today’s media and the role that labeling plays in political discourse. His advice provides a roadmap for moving from the sometimes inaccessible nature of academic writing and issue generation to the more broad based and policy driven analysis that academic training can offer but has difficulty bringing into the realm of an educated though more generalized audience.

Join Doctoral Students In Examining the Intersections Among Media, Technology and Democracy