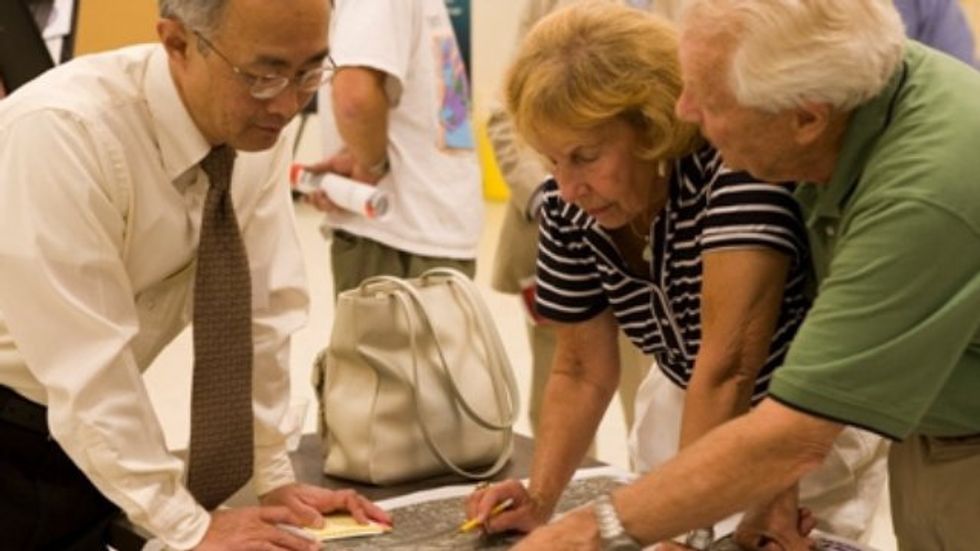 Over the past few years, scholars and scientists have been re-examining both the goals and the nature of science communication initiatives.  In a guest post today, Melanie Gade reviews much of this recent discussion and innovation.  Gade is a graduate student in this semester's course on "Science, the Environment and the Media" at American University-- MCN.

Traditionally, delivery of scientific data has lacked context, making it difficult for the public to ascribe value to the importance of the data.  Current science communication models operate on the premise that informed decisions must be based on solid science, to the exclusion of the public's values and identities.

“The prevailing approach is still simply to flood the public with as much sound data as possible on the assumption that the truth is bound, eventually, to drown out its competitors,” writes Daniel Kahan of Yale University. “If, however, the truth carries implications that threaten peoples' cultural values, then holding their heads under water is likely to harden their resistance and increase their willingness to support alternative arguments, no matter how lacking in evidence.”

The one-way, top-down nature of climate change communication can add to the perception of scientists as "elitists," since in this approach the scientist is the “expert” and the public the “uninformed.”  The resulting gap between the scientific community and the public highlights the need for reexamining the institutional framework of science communications.

In communicating about scientific data, scientists must integrate how individuals receive information and make their decisions.  Scientific data delivered in an accessible format empowers the recipients to become part of the climate change discussion.

A re-conceptualization of the institutional framework surrounding science communications about climate change is required.  As Nisbet and colleagues argue, communication can be effectively planned and implemented via interdisciplinary partnerships and initiatives at universities and other community-based institutions.

These civic engagement initiatives may prove a more effective communication strategy for climate change scientists.  Instead of disseminating "top-down" scientific data and educating the “illiterate” public (under the guise of scientific literacy campaigns), scientists can work towards providing forums that:

By rethinking the standard communications framework, it is also critical to reexamine two fundamental questions:  who are the experts and what are the ranges of policy options available?

In multi-faceted, interdisciplinary communications partnerships among organizations, universities and community based institutions, instead of “experts,” scientists should view themselves as honest brokers of information who seek to involve the public in a discussion by translating scientific advice in a way that is meaningful and useful to individuals without imposing a set of policy directions.

The following are proposals and examples for improving science communication by increasing the social relevance of science and through new institutional configurations as described in a recent special issue of Frontiers in Ecology and the Environment .

1. “Require researchers to describe the “broader impacts” of their work as a component of their grant proposals” (Whitmer et al, 2010).

* Caveat: As climate science becomes more integrated with conversations about people’s values and identities, it will remain difficult for scientists to define their work in this “wider social matrix,” without scientists themselves politicizing their research.

* Example:  The National Science Foundation’s National Ecological Observatory Network (NEON) is a “network science” project of infrastructure but also a “network of ideas” . . . to provide a more comprehensive assessment of ecological change . . . enabling creativity and collaboration across organizations, and across science disciplines or geographic boundaries. All science data is made available to the public on a new web portal.

3. “Provide or expand existing mechanisms (and rewards) for the scientific community to encourage feedback directly to the management and policy communities” (Pouyat et al, 2010).

* Example:   The USGS Global Change Science Strategy Draft is currently open to the public for comments and allows for direct feedback from the public.

4. “Bring scientists to the table to participate at the start of a management plan (rather than for review at the end)” (Pouyat et al, 2010).

5.  “Create an environment that enhances the interaction between scientists and users of scientific knowledge” (Pouyat et al, 2010).

* Example:  Possibilities for Q&A between scientists and the public.  Steven Schneider’s program on climate change exemplifies an important medium for discussion. However, this type of public education has been critiqued by some as just another form of “PR”.   Some limitations of this strategy include:  (i) the scientist is acting as a “science arbiter” and may unintentionally fall into “stealth issue advocacy,” (ii) this type of public engagement operates under the Deficit Model where the scientist is the expert, transmitting one-way information to the “uninformed” public.

6. Alternative publishing platforms - articles published online and Open Access - “content will be redefined to include the conversation it engenders” , blogs/ social media provide opportunities for scientists to interact with and include the public in the discussion.

* Example:  Elsevier has introduced a wiki based service, “SciTopics” that allows field experts to maintain pages on individual topics.

Develop new opportunities for scientists to engage the public in their science.

1. Citizen Science Programs - civic education allows for science organizations to tap into social identities, affiliations and to encourage group participation (see discussion in The Psychology of Climate Change Communication 2009). Citizen science campaigns successfully take into account how decisions are formed, promote trust and efficacy, and impart information about how to become engaged around the issue- targeting the message around action based objectives.

* Example:  National Phonology Network and Nature’s Notebook ; Cornell Lab of Ornithology and Audubon and their eBird database- Citizen Science observations are collected and recorded through these two programs and used by scientists, resource managers and planners to track effects of environmental variation and climate change on plants and animals to inform management practices.

Increasing citizen science programs will require a restructuring of how scientific research is valued: “many of the collaborative programs that do take place are included in a “service category,” which is often the least valued of the three pillars (i.e. research, teaching, and service.)” (Whitmer et al, 2010)

Example:  NSF, NBC, Yale and Discover magazine have joined together to produce the  “Changing Planet: The Impact on Lives and Values” a series of three televised town hall meetings discussing what climate change means and the impact it is having on the planet.

1.  Scientists’ messages need to, proactively, do more to establish the trust and confidence of the public.   Four workshops organized by the American Academy of Arts and Sciences encouraged scientists to see “the world through the eyes of the many and diverse groups of citizens affected by their work” and anticipate future problems so as to avoid the mistrust and conflict that have characterized the “divide between scientists and various subsets of the American public.” [PDF]

Recommendations from the Workshops reported by Chris Mooney in a 2010 article:

* Example:   For businesses, quantify effects of climate change in monetary terms.  The Dow Chemical and The Nature Conservancy are collaborating to “tally up the ecosystem costs and benefits of every business decision.”

3.  Scientists can be more effective communicators when speaking to the public.  In a 2008 article published in the journal EOS, Susan Joy Hassol provides several examples:

4.  Other examples of factors in messaging are delineated in The Psychology of Global Warming: Improving the Fit between the Science and the Message” and include:

-- Guest post by Melanie Gade, a graduate student in Public Communication at American University, Washington, DC.  This post is part of the course "Science, Environment, and the Media" taught by Professor Matthew Nisbet in the School of Communication at American.  See also other posts on the climate change debate by Ms. Gade and members of her project team.