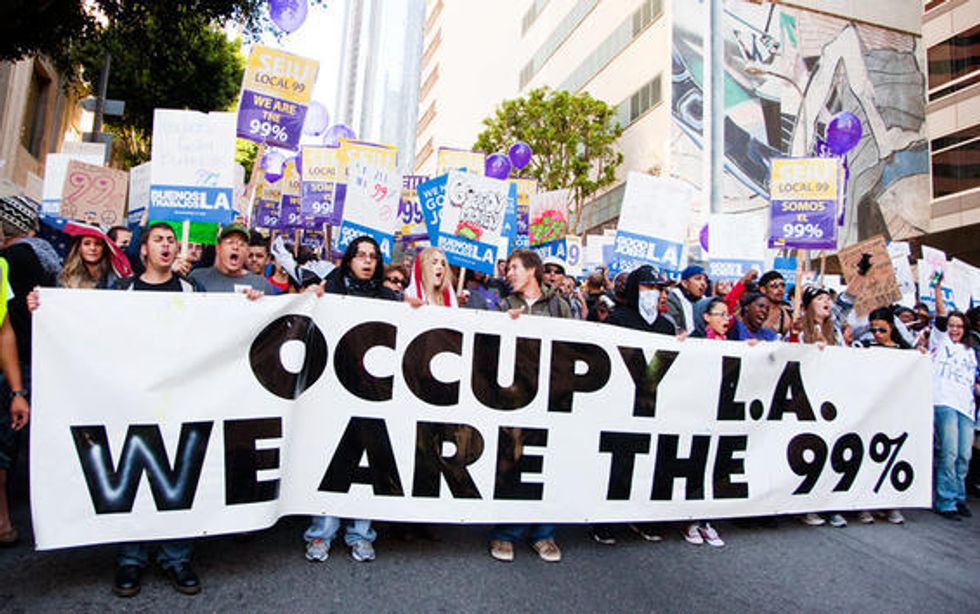 Nothing changes on New Year's Day? U2's Bono had it right – at least when it comes to media coverage of the ongoing, if flagging, Occupy movement.

"They gotta be for something," political analyst Jimmy Williams said earlier this week on MSNBC's NOW with Alex Wagner, bringing back, perhaps for old time's sake, the media reaction that prevailed soon after New York’s Zuccotti Park was taken over by protesters in late September and similar actions sprung up around the country.

Wagner commented that the movement is "a little bit schizophrenic at best" – though she did say the protesters' recent focus on the foreclosure crisis was "really interesting stuff" and "got very little discussion in the national dialogue."

Another contributor to the segment, Joy-Ann Reid, managing editor of theGrio.com, said the protesters “did a really great service by bringing the issues of inequality back.” But she added, "Somewhere in the ocean a shark is being jumped. [...] They refuse to organize themselves into a coherent narrative." [Watch the clip]

We've heard this line of reasoning before.

As Dahlia Lithwick of Slate wrote back in October: "I confess to being driven insane this past month by the spectacle of television pundits professing to be baffled by the meaning of Occupy Wall Street. Good grief. Isn’t the ability to read still a job requirement for a career in journalism?"

Even the normally astute staff of The New Yorker doesn't seem to get it, based on this recent insight about Ron Paul supporters: "The fact is that many of the young activists backing (Ron) Paul have more in common with Occupy Wall Street demonstrators than they do with Texan anti-Semites and Wyoming militia men."

It's incredible that the media has yet to uncover the fact that many of participants in the Occupy movement demonstrations are in fact young Ron Paul activists.

On my two visits to Occupy Los Angeles, I was struck by the broad political spectrum: from left-wingers to libertarians. I would venture to say that at times the Paul-supporting right-wingers outnumbered the lefties. But even more noticeable was the presence of a solid group of moderates – many of them weekend warriors, but so what - who were able to explain the movement in a way that Middle America could surely appreciate.

Why couldn't the news networks find them, giving voice to their concerns, instead of running endless video loops of violence, police stand-offs, and speculative commentary dismissing the movement as hopelessly far left-wing? And if they did find them, why can't they remember what they said?

It took my fellow documentarian Xavier Vanegas and I just a couple of hours one afternoon to uncover a coherent explanation for the movement, which we compiled into a short doc you can watch online and embedded below.

Those we talked to ran the gamut from a man who walked across the country to promote peace, to a member of Oathkeepers, a Constitutional watchdog group founded by a former Paul staffer.

All of them, including our main interviewee, consultant and writer David Jette, made it quite clear that the movement is for something. Sorry, Jimmy Williams.

--An MFA graduate of USC's School of Cinematic Arts, Patrick Riley has worked as a journalist, a screenwriter, and a TV editor. This year for AoE he is keeping his eye on developments in the movie industry and tracking the cultural dimensions of political activism, health and nutrition. Read other posts by Riley at AoE.

We Are the 99%: Models of Public Opinion that Explain the Occupy Wall Street Movement

Journalists Reflect on the Challenge of Covering Occupy Protests

iProtest: Social Media and the Evolving Nature of Political Activism

Understanding the Public Sphere in a Network Society