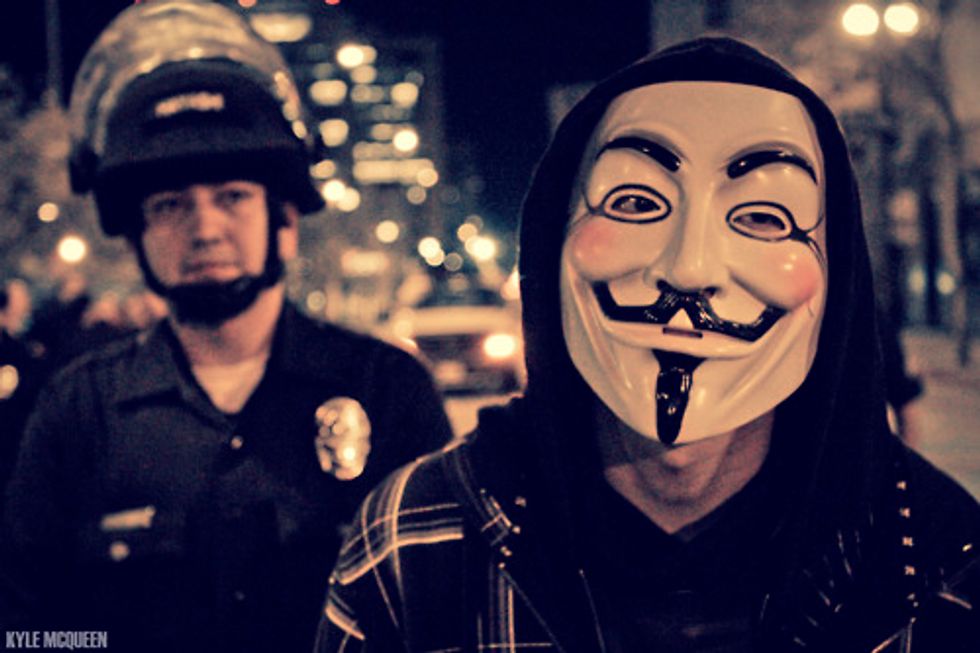 Social protest may be the most difficult type of event for journalists to cover, especially when the protest offers few visible leaders or concrete policy goals and when much of the movement's voice is coordinated across social media and other information technologies.

As a result, coverage and pictures like the one at left tend to focus on arrests, violence, or the most deviant looking participants, points of emphasis that tend to define a movement not in terms of its complaints or goals but in terms of law and order.

It's not surprising then that two independent filmmakers armed with a camera and using YouTube as a distribution platform can offer a more complex portrait of the Occupy Movement than mainstream news organizations.

Consider the observations of AoE culture correspondent and filmmaker Patrick Riley.  His 5 minute short film about Occupy LA debuted on YouTube last week. He marked the premiere with a guest post here. Below you can watch the film and read a few of his observations about the movement.

On my two visits to Occupy Los Angeles, I was struck by the broad political spectrum: from left-wingers to libertarians. I would venture to say that at times the Paul-supporting right-wingers outnumbered the lefties. But even more noticeable was the presence of a solid group of moderates – many of them weekend warriors, but so what - who were able to explain the movement in a way that Middle America could surely appreciate.

Why couldn't the news networks find them, giving voice to their concerns, instead of running endless video loops of violence, police stand-offs, and speculative commentary dismissing the movement as hopelessly far left-wing? And if they did find them, why can't they remember what they said?

It took my fellow documentarian Xavier Vanegas and I just a couple of hours one afternoon to uncover a coherent explanation for the movement, which we compiled into a short doc you can watch online and embedded below.

Those we talked to ran the gamut from a man who walked across the country to promote peace, to a member of Oathkeepers, a Constitutional watchdog group founded by a former Paul staffer.

All of them, including our main interviewee, consultant and writer David Jette, made it quite clear that the movement is for something.