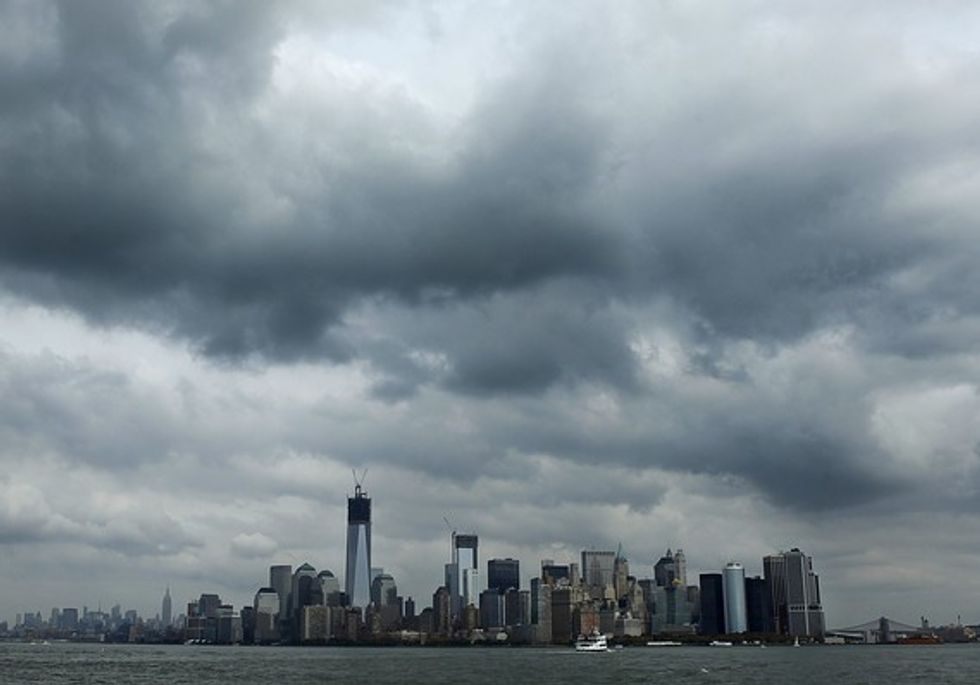 If you live in an American city, chances are this past summer and fall you have experienced the health effects of climate change.  As Richard Harris reported at NPR News in September, people who live in cities -- where there are far fewer trees and lots of pavement -- are more vulnerable to the effects of extreme heat. Rising temperatures associated with climate change not only put people at risk directly, but can also lead to more severe asthma and allergies.

In terms of other impacts, though a single super storm like Sandy can't be directly attributed to climate change, the potential threats posed by hurricanes and storm surges in a warming world are considerable, requiring coastal cities from New Orleans to Boston to make significant investments in protecting and preparing their residents, industries, transportation systems, health care services, and energy grids.

Yet in the context of these risks, focusing on the human health effects of climate change -- and the benefits to health if we take action -- opens the door to an important new way of communicating about climate change, a strategy that can inspire hope among those disengaged on the issue, while diffusing anger among those otherwise opposed to action.

As Richard Harris reported in a follow-up story at NPR News, research that I have been conducting with Edward Maibach and colleagues shows that people across the political spectrum respond more favorably to warnings about climate change when the issue is discussed as a public health problem rather than as an environmental threat. The tragic impacts of Sandy have only likely further sensitized the public to the possible health risks of climate change.

As I told Harris about a communication strategy that carefully and responsibly focuses on the health risks posed by climate change: "Not only does it lead to emotionally engaging responses among a broad cross section of Americans, it also helps to localize the issue for people and to view the issue as more personally relevant."  The research offers evidence of a frame of reference that could help define common ground on the issue:  "The idea of protecting people, the innocent especially, from harm, and caring for the innocent, is a value that's widely held across the political spectrum."

Our research, funded by the Robert Wood Johnson Foundation, has been ongoing since 2010, and has been published at a number of leading journals including BMC Public Health, the American Journal of Public Health, and most recently at Climatic Change Letters.  As an outcome of our research, we also produced a detailed backgrounder and primer for public health professionals reviewing strategies for engaging different segments of the public on the heath threats posed by climate.

Below is the text of a web story by RWJF that discusses our work to date.  See also this Q&A interview I did with the RWJF public health blog. After the story, I have posted links to related past blog posts relevant to these studies and others.

How issues are framed—the context in which problems and solutions are discussed—makes an important difference in how people understand arguments and whether they can be moved to take action. For public policy advocates, finding the right frame for an issue can be critical to persuading the public and policy-makers to take action.

In recent years, environmental advocates have faced a communications dilemma: How to frame a persuasive case for federal action to reduce the greenhouse gas emissions causing global climate change. Should they emphasize possible harm to the natural environment? Potential threats to human health? The likely economic or security effects of climate change?

According to new research led by two awardees of the Robert Wood Johnson Foundation (RWJF) Investigator Awards in Health Policy Research, Matthew C. Nisbet, PhD, MS, and Edward W. Maibach, PhD, MPH, the environmental frame that activists frequently adopt when discussing the need to combat climate change may not be the one most likely to persuade the as yet unpersuaded.

Recognizing that not all respondents bring the same information and attitudes to the table, the researchers sought to gauge reactions to the various messages among different “audience segments” of the population. In previous research, Maibach and Leiserowitz developed a categorization scheme to segment groups of respondents based on their responses to a series of questions about their “climate change-related beliefs, behaviors and policy preferences.” The resulting six groups ranged from the 12 percent of people described as “alarmed” about climate change and therefore most concerned about the issue and most motivated to action, to the 10 percent of people on the other end of the political continuum who are “dismissive” of the science about climate change and opposed to action intended to mitigate or adapt to its effects. In between these two ends of the spectrum, the researchers identified four groups of people described as “concerned” (27 percent), “cautious” (25 percent), “disengaged” (10 percent) and “doubtful” (15 percent).

In follow-up work, Maibach and Nisbet analyzed in-depth interviews with 70 respondents from 29 states, and found that individuals across all six audience segments found information about the health implications of climate change to be both useful and compelling, particularly when mitigation-related actions were paired with specific benefits to health. They went one step further in in their latest research, testing the public health frame alongside national security and environment frames on a nationally representative online sample of 1,127 people, including participants from each of the six audience segments. The researchers carefully vetted their message frames with scientists and other experts to be certain they were factually accurate. Then they asked study participants to read a news article reflecting one of the three frames, and to indicate which parts of the articles made them feel hopeful, and which parts made them angry.

While people in the various audience segments reacted differently to some of the messages, in general the public health frame generated more hope and less anger than the national security or environmental frames. As the researchers write in a newly published study in the journal Climatic Change Letters, “Results show that across audience segments, the public health focus was the most likely to elicit emotional reactions consistent with support for climate change mitigation and adaptation.”

Just as significant, the research also indicates that the national security frame could “boomerang among audience segments already doubtful or dismissive of the issue, eliciting unintended feelings of anger.” That finding could give pause to environmental advocates who have sought support from conservatives by pointing to Pentagon studies warning of threats to national security posed by the destabilizing effects in some regions of the world of violent storms, drought, mass migration and pandemics resulting from climate change over the long term. “It is possible,” the researchers write, “that members of the ‘doubtful’ and ‘dismissive’ segments perceived the [national security argument] to be an attempt to make a link between an issue they may care deeply about (national security) and an issue that they tend to dismiss (climate change), or they felt the article was attempting to co-opt values they care strongly about, thereby producing a negative reaction.”

Whatever the source of the anger, however, not only did the national security message not persuade opponents of action on climate change, it seemed to fan the flames of their opposition. While this group may never change its fundamental viewpoint on the issue, Nisbet says, “One goal from a communication standpoint is to…overcome polarization and defuse some of the anger that people on one side of the spectrum express about climate change.”

Taking a Measure of Control

Nisbet also warns that messaging around climate change can become “deactivating” for people, not just if it evokes anger, but if it leaves people without a sense of hope for a solution, or if the problem seems too complex to address. He says that respondents in the “alarmed,” “concerned” and “cautious” categories react with hope to all three frames, but that people in the “disengaged” category react much more positively to the public health frame than the national security or environmental frame. “They see it as something within their realm of control, something that can make their lives better.”

For that reason, in communicating about climate change, Nisbet says, advocates need to be careful not to “present the danger as being so threatening that it feels overwhelming to people. Whenever you give people information about the risk of climate change, if you don't provide specific things they can do about it, they can become fatalistic, or just deny the threat. That's been a problem with some of the environmental messaging around climate change.” Those specific action items, the research suggests, could include policies to make energy sources cleaner, to make cars and buildings more energy-efficient, to make public transportation more accessible and affordable, to improve the quality and safety of food, and to make cities and towns friendlier to cyclists and pedestrians.

Nisbet also observes that the public health frame connects on a more personal level. “Health issues usually fit higher on people’s agendas than environment issues,” he says. “So by focusing on public health, you connect climate change to real risks, backed up by emerging science. You shift the focus of the impact of climate change away from remote polar regions and symbolic animal species like polar bears and penguins, and localize the impact to a particular region or city. And you put a human face on the problem. That way, advocates can start to convey a sense of moral responsibility, especially in terms of protecting the innocent and the vulnerable. Many people see protecting the environment as a value, but not a plurality of Americans. But moral responsibility to protect the health of kids or the elderly is a more widely held value.”

Peak Oil Perceptions: How Americans View the Risks of a Major Spike in Gas Prices

Public Opinion and Participation in the Climate Change Debate

Why Most Efforts at Climate Change Communication Might Actually Backfire