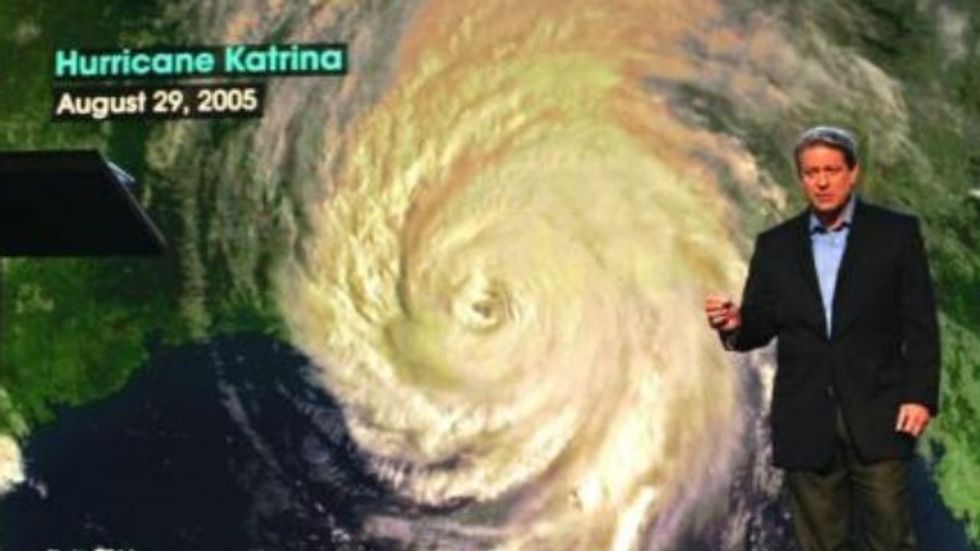 Building on the themes he emphasized in an article last month at Rolling Stone magazine, Al Gore has announced a September event to launch The Climate Reality Project.  The 24 hour event features a day of multi-media presentations linking climate catastrophe to the efforts of Big Oil, Big Coal, and climate deniers. Watch the video announcement below of the event.

The initiative brandishes the same lead frames of catastrophe and accountability featured in An Inconvenient Truth and uses the We campaign's online opinion-leader model to engage audiences.  Billed as a global event, the initiative appears primarily aimed at mobilizing progressive donors and activists in advance of the 2012 election.

Here is a round-up of past studies and papers that provide some context for understanding the likely impact of the Climate Reality Project.

Longitudinal cross-sectional survey finds that one week before the event, 62% of Americans had not heard of the concert and the Americans who did tune into the concert and rally were already strongly concerned about global warming and leaned overwhelmingly Democrat.  The survey found no aggregate impact on public opinion for the event.

With strong selectivity bias online, digital interaction might simply result in ideological reinforcement and intensification of beliefs about climate change, which may eventually limit the willingness of recruited opinion leaders to compromise on pragmatic policy solutions (a typical social movement problem perhaps amplified by the Web).

Moreover, if the weak ties of digital interactions lack the strength of traditional opinion-leader influence, then time and effort spent online by digital opinion leaders may be far less effective than traditional face-to-face influence. The danger of relying too heavily on digital organizing is that it might create a false senseof efficacy among participants, with activists believing they are making a difference on climate change, when impact may be limited at best.

...former U.S. Vice President Al Gore, many environmentalists, and even some scientists have attempted to counter the scientific uncertainty and economic consequences frames [of climate skeptics] by emphasizing a Pandora’s Box of looming “climate crisis.” To instantly translate their preferred interpretation, these advocates have relied on depictions of specific climate impacts, including hurricane devastation, polar bears perched precariously on shrinking ice floes, scorched, drought-stricken earth, blazing wild fires, or famous cities or landmarks under water due to future sea-level rise.

Publicity for Gore’s documentary on climate change’s effects, An Inconvenient Truth, dramatized climate change as an environmental Frankenstein’s monster, including a hurricane-shaped plume spewing from a smoke stack on its movie poster and a trailer telling audiences to expect “the most terrifying film you will ever see.” With an accent on visual and dramatic effects, the catastrophe strategy triggered similarly framed news coverage. For example, a 2006 Time magazine cover featured a polar bear on melting ice with the headline, “Global Warming: Be Worried, Be VERY Worried.”31

One of the unintended consequences of this line of communication is that it plays into the hands of climate skeptics and further reinforces the partisan divide in climate change perceptions. Andrew Revkin, who has covered climate change for nearly 20 years for the New York Times, argues these claims are effectively countered by critics, such as Inhofe, as liberal “alarmism,” since the error bars of uncertainty for each of the climate impacts are much wider than the general link between human activities and global warming.32

These challenges, which are easier when the target of ridicule is a former political figure such as Gore, quickly reactivate a focus on scientific uncertainty and the heuristic of partisanship. In addition, the public is likely to translate these appeals to fear into a sense of fatalism, especially if this information is not accompanied by specific recommendations about how they can respond to the threats.33

Revkin and others worry that the news media has moved from an earlier era of false balance to a new phase of overdramatization, one that skeptics can easily exploit to dismiss climate change as a problem.34 Polls suggest that the public has picked up on critiques of the media by conservatives, likely filtering this information through their preferred partisan lens and their belief in liberal media bias. Such filtering results in Republicans who not only discount the climate change problem but who also agree that the mainstream news media is exaggerating its severity.35

Many environmental advocates and scientists have focused on public accountability as an additional call-to-arms on climate change. These advocates accuse the George W. Bush administration of putting politics ahead of science and expertise on a number of issues, including climate change. For example, in the 2004 election, Democratic presidential candidate U.S. Senator John Kerry (D-MA) made strategic use of the public accountability frame, comparing distortions on climate change to the administration’s use of intelligence to invade Iraq.36

In 2005, journalist Chris Mooney’s best-selling The Republican War on Science helped crystallize the public accountability train of thought, turning the “war on science” into a partisan rallying cry.37 In 2007, Hillary Clinton, in a speech marking the 50th anniversary of Sputnik, promised to end the “war on science” in American politics, highlighting the prominence of this frame device.

In a late 2008 transition speech, President Obama similarly invoked the public accountability frame and Gore’s film while announcing his science policy advisers: "Because the truth is that promoting science isn’t just about providing resources—it’s about protecting free and open inquiry. It’s about ensuring that facts and evidence are never twisted or obscured by politics or ideology. It’s about listening to what our scientists have to say, even when it’s inconvenient—especially when it’s inconvenient."38

The public accountability frame has outraged and intensified the commitment of scientists, environmental advocates, and many Democrats, motivating them to label climate skeptics as “deniers” and to engage in sharp rhetorical attacks on political opponents. Yet for other members of the public, “war on science” claims are likely ignored as just more elite rancor or only further alienate Republicans on the issue.

Justifiable blame has been attributed to the George W. Bush administration and conservatives who through their policy positions and message strategies have reinforced the gap in perceptions between Republicans and Democrats on the issue.  Largely overlooked, however, is the role that Democratic leaders, most notably Gore, have played in contributing to the polarization that exists today...

...Over the past decade, the propensity for Gore and conservatives to use climate change to mobilize their respective bases has intensified the polarization that began with the 1997 Clinton Kyoto campaign.  As Gore has worked tirelessly to translate climate science for the public, he has also consistently sought to mobilize progressives politically.

Following his loss in 2000, as Gore returned to delivering his slideshow on climate change, he began in 2002 to partner with MoveOn.org delivering speeches critical of the Bush administration’s policies on Iraq, the economy, terrorism and climate change.13 In May 2004, with the release of the blockbuster film The Day After Tomorrow, Gore joined with MoveOn.org and environmental groups in an effort to use the film as a “teachable moment” with the summer blockbuster billed as the environmental movement’s equivalent to The Passion of the Christ.14

“The Bush administration is in some ways even more fictional than the movie in trying to convince people that there is no real problem, no degree of certainty from scientists about the issue,” Gore told reporters at a MoveOn.org event that also featured scientists.15 Though receiving far less attention than The Passion, the climate disaster film generated 10 times as much coverage as the 2001 IPCC report, with political stories comprising 37 percent of this coverage.16

In 2007, boosted by the media attention generated by An Inconvenient Truth and his receipt of the Nobel prize, Gore’s popularity crested at 58 percent (see Figure 4.2).  In contrast, Bush’s favorability had hit an all-time low the same year, with public esteem eroded by the war in Iraq and reinforced by his handling of Hurricane Katrina.  As mentioned at the outset of this chapter, the media widely speculated as to whether the “Goracle” would run for president.  In April 2008, as his WE campaign began its bipartisan advertising campaign (see Chapter 1), Gore continued his prominent role as a partisan leader, appearing at Democratic fundraisers, endorsing Obama in June and delivering a primetime speech at the Democratic National Convention in August.

The six years of Gore’s political campaigning on climate change had mobilized a base of concern among Democrats but reinforced disbelief among Republicans.  In 2002, according to Gallup trends analyzed by sociologists Riley Dunlap and Aaron McCright, 56 percent of Democrats thought the effects of global warming already had begun, compared with 46 percent of Republicans. By 2008, Bush’s last year in office, Gore’s efforts had helped boost belief among Democrats to 76 percent, while belief among Republicans remained virtually unchanged at 41 percent.17 Survey research conducted by Stanford’s Krosnick finds a similar pattern across the same period.  Additionally, he reports that even though they viewed the issue very differently, strong Democrats and Republicans each held similar levels of knowledge and were equally certain of their opinions.18

By 2010, the country’s political mood had shifted right of center.  This new political mood, combined with Gore’s separation and news stories alleging sexual misconduct, likely contributed to a 14 percent drop in his favorability (see Figure 4.2).  Gore remains the public figure most closely associated with climate change—both the science and the policy—and yet in 2010 only 44 percent of Americans had a favorable impression of Gore, a level equivalent to that of George W. Bush (45 percent) and Sarah Palin (44 percent).19