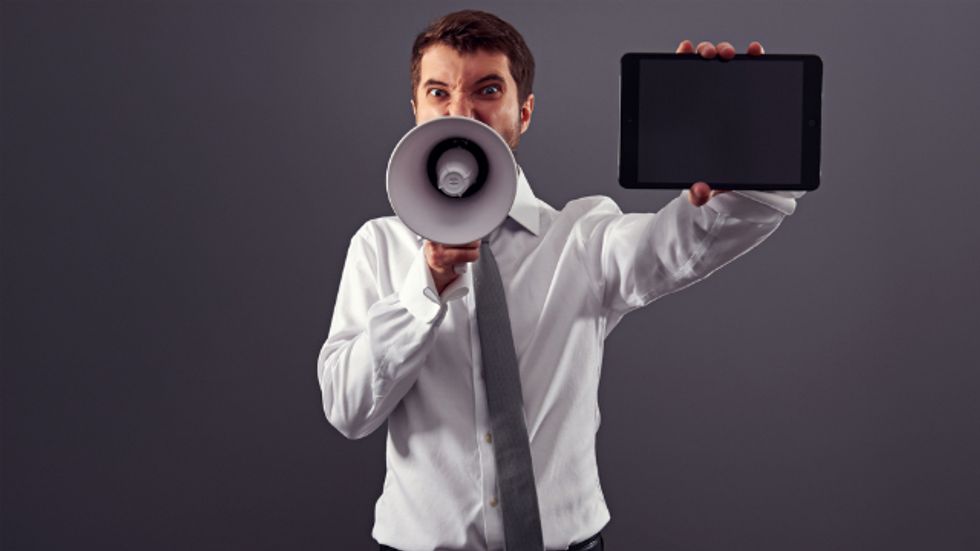 We’ve all been there. The Internet comment section stares at us, blinking its sexy open space, inviting us to put words all over it, to tell the world why the silly author of the article is oh so wrong.

Too many tabs with too many problematic articles: The world needs to know why this particular individual is wrong and we know that we could serve this public good with our misspelled words, exclamation marks and CONSTANT CAPITAL LETTERS. There are too many gay, liberal baby-eating aetheists/atheests/whatever out there and they need to learn that Obamacare won’t protect them forever (that’s what it does right? Protect liberal gaytheists?).

To that end, this list can be referred to instead of writing out an entire comment: We won’t stop the scourge of the gay agenda – or is it the socialist? – by wading into one comment section at a time! Sure, we could send emails or write proper arguments or read people charitably – but what effort! Instead, let anger and righteousness reign!

These 4.1 comments are all you need. Simply copy and paste the bold, insert the agenda you’re rightfully attacking and use at your convenience.

Explanation: Why assume others do not know or haven't read the same things as you? That’s ridiculous: of course everyone’s done the necessary reading, had the same amount of exposure to these ideas and articles.

We’ve reached our conclusions, we know what’s right and wrong: either this article is a rehashing of an obviously wrong article or an obviously right one. "Grey areas"? Another feminist liberal buzzword!

Either way, it’s useless to us, therefore it’s useless to everyone – because, as we know, everyone is at the same level of education and at the same level of education on this topic. Otherwise, it’s just boring: no one could possibly find this content – about science or space or politics or economics – possibly interesting therefore yawn, yawn, yawn.

The idea that the world is complicated, that reading updated thoughts, better counter arguments, is good is just madness. It’s simple. We know what the answers are. The New York Times is better off asking us to just put down all our thoughts so that no opinion or news articles ever needs to get written again.

Internet Comment #2 - “WHY ARE YOU SPEAKING ABOUT X AND NOT ABOUT Y (i.e. the thing I care about more)”

Explanation: Sure the “writer” could be focusing on this particular point about this particular subject because that’s where her knowledge and interest lies, but don’t let her interests control you!

You must show her that, as a reader person – who’s actually never read her and won’t ever do so again, assuming you went past the title – your interest is actually different and she should use her platform and time to cater to that. Oh, so she’s talking about how women are oppressed? Well why didn’t she talk about how men are oppressed! Oh, she’s talking about how guns are dangerous, well what about all that disease caused by bad living conditions!

Don’t let her expertise or research rule you: It’s called freedom. Show her how it works.

Yes, the topic itself might require her honing in on this area and there might exist other writers actually writing on what you like, but don’t let that stop you. Everyone should be doing what they can to cater to us – otherwise what’s the point of their job? It’s not like other readers have different interests and different levels of knowledge, as we established in Internet Comment #1.

Internet Comment #3: “WHY ARE YOU WRITING ABOUT X WHEN THERE ARE BIGGER THINGS TO WORRY ABOUT?”

Explanation: As the world’s leading researchers into curing cancer, Aids, poverty and totalitarian oppression, we obviously get tired of reading about silly women whining about their “oppression”, about the gays who want more rights than us normal, proper folk, and manchildren getting upset over other imaginary manchildren (video games and films).

There are more important things to worry about than whether women get attacked or have a few mean words thrown at them online (they probably deserve it: If they didn’t deserve it, they wouldn’t be getting abuse. That’s called logic, feminazis!)

Words never hurt anyone! Do they think they’re living in Harry Potter land: no one’s going to wave a wand and try kill them.

Seriously: there are bigger things to worry about and all articles everywhere must simply focus on those things we’ve earmarked “bigger things”. The idea that we can read many things at the same time or subsequently is just liberal agenda writ large! Don’t tell me that someone who writes criticism of tv-shows can’t do complicated economics problems: both involve writing!

Internet Comment #4: “WHY SHOULD I READ SOMEONE WHO OVERUSES EXCLAMATION MARKS / MISPELLS A WORD / WRITES A WORD IN BRITISH ENGLISH, NOT AMERICAN ENGLISH?”

Explanation: If they’re not bothering with communicashin why should you? When we post comments, we make sure every word is perfec and the grammar are write. Yes, they’re human and their going to mak a mistake, but you don’t ever do so in front of us! That’s just embarrassing. So we don’t have to engage with the argument: We can simply point out that one or two words are wrong and leave. We’ve surely bested someone by doing so.

Internet Comment #4.1 “TYPICAL LIBERAL/SOCIALIST/FEMINIST/ETC. NONSENSE” / “I WOULD EXPECT THIS FROM AN X”

Explanation: There’s no need to actually read. As we noted with Internet #1, we know the arguments. We’re commenting to emphasise how wrong this person is. Why do we need to provide reasons? Everyone knows the feminists are just whining, the gays are trying to take our children and rule by Obamacare so they can take Syria back, and so forth.

Some snarky liberaltard might say: It clearly can’t be “everyone” because then feminism/gay rights activism wouldn’t exist. To that we simply say <Insert Comment #1>.

UPDATE NOTE: this list was never actually updated. The title is a liberal lie!