Of Penises and Presidents: Jacob Zuma versus The Spear 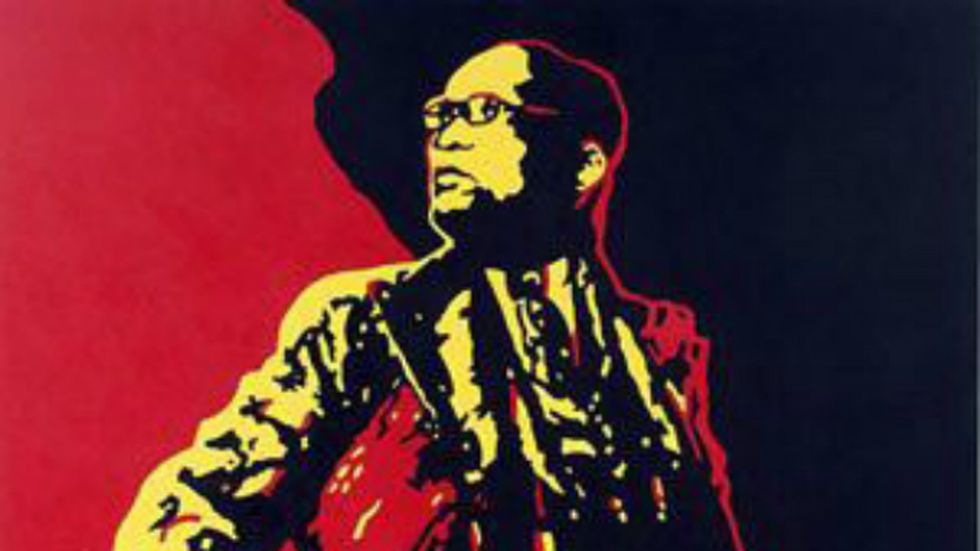 South Africa’s president, Jacob Zuma, was recently portrayed with his penis hanging out, by the very talented satirical artist Brett Murray. The piece, entitled The Spear, features President Zuma standing proudly, reminiscent of the famous Victor Ivanov poster Lenin Lived, Lenin is Alive, Lenin Will Live, except with Zuma’s exposed genitals. The Spear created massive outrage from the President, South Africa’s ruling party the ANC, the president’s family and many of his supporters. Recently, it has been defaced by supporters who claim, at the very least, Mr Zuma’s dignity has been undermined.

The Spear in Zuma’s Side

While places like Canada might shrug off such incidents, if not go along with them in good humour, South Africa is regarded as a young democracy where the clash of values is still loud enough that the conflict itself creates a story. Others have already dealt with the so-called cultural differences. I want to focus on balancing individual liberty with the limits of free expression.

The first thing to notice is that this was portrayed in an art gallery. One encounters all manner of disgusting depictions there: from bad poetry to people defecating. Disgust is not a total measure of morality or legality, and should never be, especially when it comes to matters relegated to creative expression. This is the equivalent of going to a Metallica concert and complaining about the volume.

But this is where things get complicated. From the ANC’s statement:

We have also detected that this distasteful and vulgar portrait of the President has been displayed on a weekend newspaper and its website, we again have instructed our lawyers to request the said newspaper to remove the portrait from their website.

And now it is all over the Internet and various print publications. Initially, it seems they’re using their lawyers to combat what they consider disgusting. This is true, but not entirely the major problem. As you can see, it’s become complicated by the fact that the art no longer strictly resides in the gallery. Thus, it isn’t so much attending a loud concert as it is an open convertible with a loud sound system, appearing in random locations of one’s neighbourhood. One can sympathise with this, but I’ll shortly argue why there’s nothing special about this particular distribution of Murray’s portrayal.

The image and the dignity of our President as both President of the ANC, President of the Republic and as a human being has been dented by this so-called piece of art by Brett Murray at Goodman Gallery. We are also of the view that this distasteful depiction of the President has violated his individual right to dignity as contained in the constitution of our country.

As Justice Malala claims in The Guardian, though, there is no constitutional guarantee of dignity: “There is nothing in our constitution that enjoins us to respect the head of state, or to genuflect before him. This is a constitutional democracy, not a monarchy.” Whatever respect the President wants cannot be forced from us, it will not be automatically provided by the nature of his office. Whatever respect he wants must, like the rest of us, be earned. He does not get constitutional protection from criticism and mockery, so this statement is evidently incorrect. Furthermore, whatever “right to dignity” one can claim does not remove oneself from mockery, satire and derision – especially if one is a public figure, if not the public figure in a country. This, more than anything, is analogous to the Metallica analogy: to go into politics, to go into a leadership position, is to step into the limelight of criticism, derision, and hatred.

And Mr Zuma’s actions, especially his sexual exploits, have consistently been in the spotlight. We are, after all, talking about a man who, says The Economist, “has four wives, two exes and 22 children by ten different women.” He “was charged in 2005 with raping a struggle comrade's daughter, but was later acquitted.” This is what made newspapers and talkshows and brought media attention. Given this public portayal of a man focused on his sexual nature, what is so different about Murray’s portrayal? Indeed, if anything, it would’ve been a bad call had Murray focused on anything other than Zuma’s sexual organs. Whatever Brett Murray portrayed in his painting was already brought to reality by Mr Zuma’s own actions.

I have little concern with Zuma’s – or anyone’s – sexual exploits, unless they unnecessarily take away from resources I am paying for as a citizen. I also care that he has an excessive number of children, given my own views on procreation – but that’s because he has a lot of them, not because he’s the President (though it would be a great message as a leader to adopt one of the numerous children needing homes in the country, but I’ve long given up on politicians as worthwhile leaders). Mr Murray has not called for Mr Zuma’s death, has not mocked his race, has not mocked anything other than what has been in the news for many years about Zuma.

This is why the fact that it is widely distributed does not make a particular challenge. Not many are even questioning why Murray portrayed Zuma like this. His supporters are frothing for a reason: it hits home. If Zuma doesn’t like it, too bad. Would I like something like this happen to me? No. I would not. But I am not the President, I am not a philanderer or man with homes overflowing with wives and children.

A Lesson to Learn

More importantly, I recognise I am not infallible. And it is this lack of realisation and recognition that I find most disturbing in a leader of a free country. More important than being able to withstand mockery is the recognition that you are a mammal with a digestive system. There’s nothing sacred about you, your party, your policies and, indeed, even your country. To be grownup is to recognise not only that people won’t like you, that people will mock you, but more importantly to recognise opponents’ portrayal of you might be justified and, secondly, you might be wrong. How you feel about that is irrelevant to the wider goal of recognising fallibility in a social web that attempts to manage freedom and liberty and respect among fellow fallible beings. We are all better for recognising our limitations and shortcomings, rather than pretending we’re all perfect and beyond such mockery. As Terry Pratchett so beautifully put it “I’d rather be a rising ape than a fallen angel”. Believing in infallibility, of certain people, places and ideas is our history and it should remain history, not become our future.

The point is that we must balance individual, personal ideas of liberty, dignity and self-worth along with a wider web of a free society’s liberty, dignity and self-worth. It is an ongoing discussion, not one to be shut or drowned out by claims of “dignity” or other nebulous terms, that sit within a framework of something more important than your individual need to not be ridiculed.

A society that allows certain people to be removed from mockery is one that denies certain people’s fallibility. It is to deny an important aspect of our nature as social mammals, which is what allows us to be in wider societies in the first place. The inability to admit mistakes is what leads to paternalistic and totalitarian rulings: that mindset comes from thinking some things or some people are infallible. It is one thing to show respect to individual people; it is another thing entirely to claim these individuals are beyond certain types of criticism, whether through the written word, satire or mockery, especially when he or she is in a position of public scrutiny. Furthermore, to tolerate plain-vanilla newstories that report one’s highly visible sex-life, to tolerate opinionators who call out, mock, and deride that same sexual philandering, and yet deny artists the right do so is, at the very least, hypocritical.

This does not mean I would not, at the very least, be unhappy should someone paint me naked, with a particular focus on my anatomy. However, there is little reason for anyone to do so. Unlike Mr Zuma, I have given no one a good reason to. The thing that would upset me most should this happen is that it is simply unfunny and blunt: with Mr Zuma, one particular criticism over the years simply is his very visible sex life, as The Economist noted above. As a tax-paying citizen, I only care about my president’s sexual engagements when they cost me since I pay his salary. If non-governmental individuals had multiple marital partners, that is their doing: I see little problem with it, unless it is not consensual (which is the problem with nearly all wrong sexual activities).

To that end, fighting for our individual respect is important. I do not deny Mr Zuma feels violated and ashamed. However, we all feel that way about many things. Mr Zuma is not perfect and, I think, The Spear is pointing this out (or did). Anything that takes leaders and their offices off pedestals is important, for any liberal democracy. It is a sign of healthy public engagement, which means it is one that recognises it's leaders makes mistakes because they're human.

I will respect Mr Zuma as a man, as I respect any other, should we ever meet. But I have no reason to simply respect his policies and decisions, just because he’s the president. I have little reason to respect him at all just because he’s the president. I’ll respect him as much as I do anyone else: to the extent they’ve earned it. However, I would respect someone more if he showed restraint, if not acceptance, at this portrayal. I respect any who recognise their faults and weaknesses and their fallibility. That Mr Zuma and his office have created a Streisand Effect only means he wasted an opportunity to gain the very respect The Spear highlighted he never had.