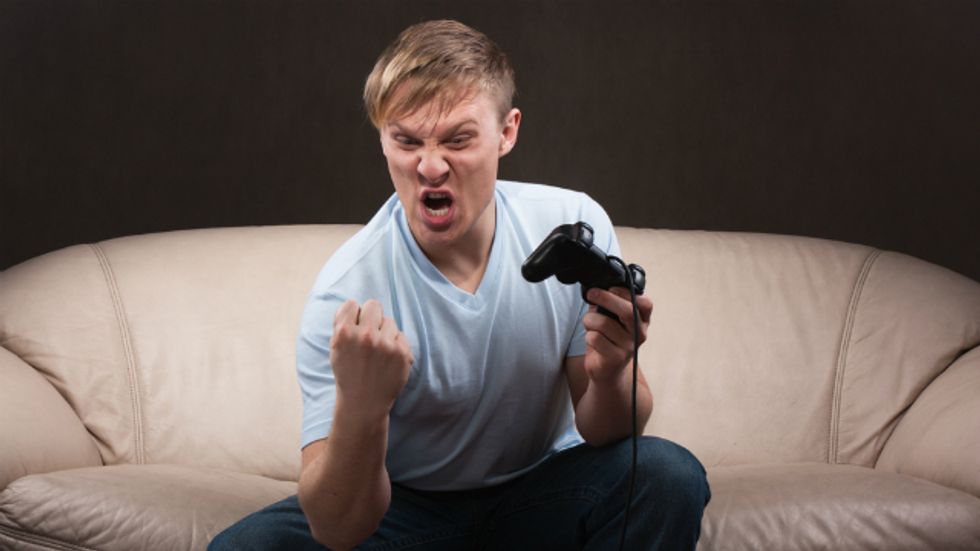 I came across a remarkable story, from some years ago, where someone was rather upset with Canadian game developer Bioware for including an optional homosexual element in a, now fairly old, game.

However, this is not about games, alone, but a broader topic.

Firstly, congratulations on your role as spokesperson for heteroNORMative (totally not gay) persons (i.e. men); a role that no doubt you achieved, after a majority vote by fellow Straight Male Gamers at the Straight Male Gamer convention/conference/tea party/dance off. It is good to know that a voice such as yours can have an impact in one specific forum, for one specific developer, about one old game. We need this, due to our long-standing, unending oppression as a misunderstood species.

Second, we are very glad you expressed your discomfort with "the homosexuals" on a public platform, from whence you proceeded to claim discomfort on every non-homosexual's (i.e. fans, i.e. normal, i.e. REAL men's) behalf.

Good. Let us show these "homosexuals" that they will not and cannot force their agenda on us. (We have no idea what their agenda is - something about "equal rights" or some made-up oppressive goals which harms us because the personal, consensual love of two adults has magical, necromantic powers.)

When we of the CSEMWCSAMDBWWTMFU - Coalition of Self-Entitled Men Who Cannot Stand Any Measure of Discomfort Because The World (And Everything in It) Was Totally Made For Us (Including "Females") - saw your message, we were very glad our egg avatar on Twitter appeared on all three of our Followers' feeds. Indeed, @SEO_Guru1243, @Sexxyygrrl557 and others responded with such unprecedented enthusiasm, they sent us Tweets comprised solely of URLs to "get more followers" because of how many agree.

You pointed out to those “homosexuals” and “females” at Bioware that you should never be made to feel your sexuality has been examined. Indeed! As you so eloquently said:

“Its ridiculous that I even have to use a term like Straight Male Gamer, when in the past I would only have to say fans”.

Because who else - aside from what data indicates are large demographics of players who are not men or REAL men - plays games?! How dare they FORCE their homosexual agenda down our throats!

This is a man’s place, a man’s world. We are the target audience and we should get what we pay for - not some hysterical flubbering from the terrifying mass of pink pride that threatens to consume our children. How oppressed can they really be when they’re the ones being catered to! Think about all the gay couples or lesbian couples and trans people on advertisements or popular campaigns around the world. We can’t think of any, but we’re sure they’re dominating - not the heteroNORMative, nuclear two and half children and wife that is the desired aspiration of all Straight Men.

If we don’t point this out to companies like Bioware, who will? Our majority way of life is being threatened by this gay agenda or whatever.

The feminists are trying to force us to play women (Tomb Raider), the gays are forcing us to have sex with them (an optional part that might not happen in Dragon Age 2), Russians are forcing us to play Russians (Metro 2033)! I am neither a women, a gay, nor a Russian and I should be appealed to as the person I am. Sure, that would mean every game is set around a comfortable suburban, upper-middle class, middle-aged completely 110 % straight man - but that would mean games are finally appealing to REAL fans, not the celebrated, perfectly protected, never targeted marginalised people of different races, sexes, etc.

And we know that we kill, maim, and make hard moral choices that go against religious convictions and other deeply-held beliefs all the time in games; that’s their nature, to challenge us.

Or that’s what the pink mafia want you to believe! In actual fact, it’s indoctrinating us to become a “homo”. Next thing you know, games will be in Japanese with subtitles or something!

The idea that fiction (like games, novels, etc.) are an avenue to explore “different dimensions” of “different people”, to see the world “through different eyes”, is just a cover for misandry and oppression.

Never stay silent, brave spokesperson for Straight Male Gamers. For we will not be silent, since we have all this free time to not worry about being able to: donate blood, adopt, get married, get into various jobs, obtain job security, enter the military, find schools for our children or have our children bullied because of who we love, ousting from family, expensive operations, inability to reach different levels of buildings which only have stairs and no lifts, going into bathrooms without being attacked for not looking enough like our perceived sex, being catcalled and physically assaulted and blamed for those assaults because of “what we wear” or “how drunk” we are, being sexually assaulted by people we trust and being reminded of rapes and being blamed because we think our bodies are our own, lacking proper representation in media, walk alone, have respect as a colleague or politician or scientist instead of merely a sex object, and maybe, probably, one day, love others and ourselves as we want without being arrested, beaten or murdered for it.

We have no idea what these others are about, but thank goodness we don’t (really) have these issues! Let us continue searching for all the other ways the world targets and ignores us.

Yours in brotherly - no homo - strength.