Could Michael Bloomberg actually win? Or should he spend his billions on fixing our broken electoral system instead? 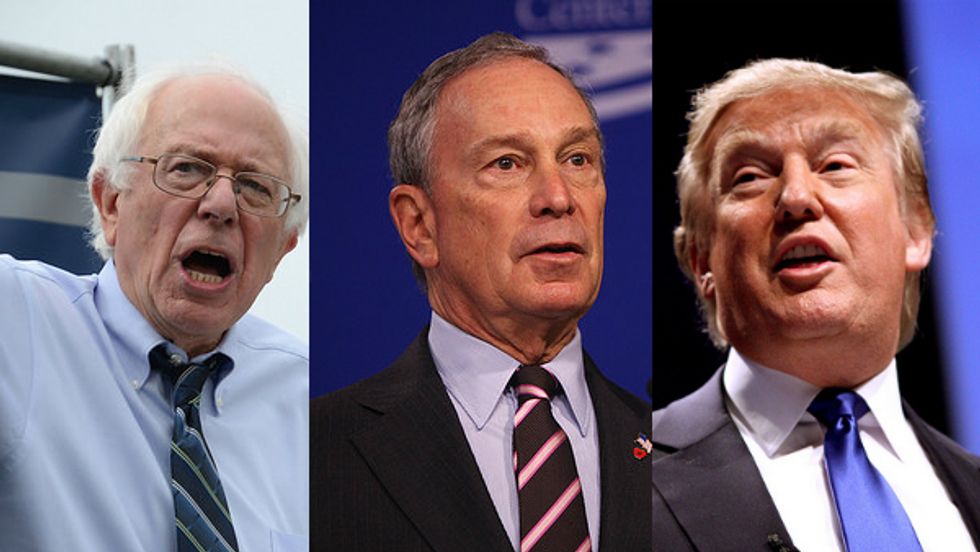 Michael Bloomberg, the billionaire former New York City mayor, is reportedly considering spending up to $1 billion of his own money to run for president. But could he actually win? Or would he be better off spending that money to revamp our electoral system — giving independent candidates like himself a better chance to win next time around?

For Bloomberg to win the 270 electoral seats needed to become president, he would need to receive all of the electoral votes in major "Democratic" states (such as New York and California) and "Republican" states (such as Texas and Georgia), essentially "stealing" those electoral votes from the Democratic and Republican nominees (in this case, let’s say Bernie Sanders and Donald Trump). Keep in mind that most states choose to apportion all of their electoral votes to the candidate who receives the most popular votes. (The exceptions are Maine and Nebraska, which choose to apportion theirs relative to the popular vote — so if Bloomberg got one-third of the popular vote, he would get one-third of the electors.) So, in order to win the presidency, Bloomberg would have to receive more popular votes than Sanders or Trump in states such as New York, California, Texas, and Georgia. Even with a billion dollar budget, this seems highly unlikely.

So what is Bloomberg thinking? He is likely hoping that his entry into the race will mean that no candidate wins enough electoral votes to become president (which is possible if Bloomberg actually "wins" at least one state), thereby sending the decision directly to the House of Representatives, who, according to the 12th Amendment, must follow an elaborate and complex set of rules to select a winner (this has happened once before, when the House chose John Quincy Adams over William H. Crawford and Henry Clay in 1825). Is Bloomberg delusional, or might the House, divided by the prospects of having to decide between Sanders and Trump, ultimately choose Bloomberg as the best "compromise" candidate?

It doesn’t have to be this way. If Bloomberg believes that his vision more accurately represents “The Will of the People” than either Sanders’ or Trump’s, he should put his money where his mouth is and push to change our electoral system so that he — or a future candidate he wants to bankroll — can win fair and square. This does not mean a Constitutional amendment to get rid of the Electoral College. It also does not mean a Constitutional amendment to overturn Citizens United and reinstate campaign finance reform. Constitutional amendments are hard; that is why there are only 27 of them. Instead, on a state-by-state basis, Bloomberg can push to institute Approval Voting — where voters are permitted to vote for (“approve” of) as many candidates on the ballot as they wish. In that way, voters who loved Sanders and liked Bloomberg could vote for both, effectively registering their support of both candidates over Trump. Likewise, a voter who loved Trump and liked Bloomberg could vote for both as a hedge against a Sanders presidency. Either way, in Approval Voting, the candidate with the broadest overall support wins.

Think of the state of New York: Right now, all of its 29 electoral votes go to the plurality winner (that is, the candidate who receives the most popular votes); but imagine if, instead, they went to the approval winner (the one who receives the most approval votes)? A popular third-party or independent candidate would stand a serious chance of "winning" the state, and thereby receiving all of its electoral votes. If Bloomberg were to be the approval winner of major states such as New York, California, Texas, and Georgia, he would be able to make a serious case to both the House and the American people that he was the rightful president.

Instead of spending a billion dollars on a pipe dream under the existing rules, Bloomberg would be better off using his money to advocate for real change — pushing major states to use Approval Voting to apportion their electoral votes and thereby giving himself and other candidates he "approves of" a real chance of becoming president.

Eric Sanders is a writer, producer, and director who has also served as a Board Member of the non-partisan 501(c)3 organization The Center for Election Science (http://www.electology.org), the world’s pre-eminent think tank studying voting systems in order to improve democracy. More about Eric at http://www.funintrouble.com.

Approval Voting is perfectly legal, so if you want to post a comment about how it violates “one person, one vote,” please read this (http://electology.org/approval-voting) first and save yourself some time.