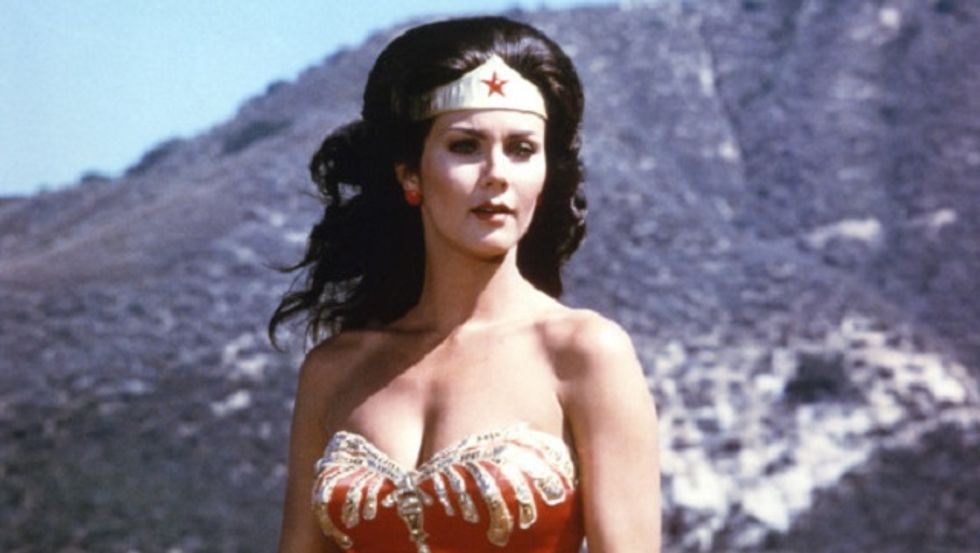 If you’re old enough to remember the 1970s, Lynda Carter playing the title character in the TV show Wonder Woman (shown above) from 1975 to 1979 remains what you think of when you hear the name of the heroine Wonder Woman. Sadly, one of the oldest (and one of the first female) superheroes seems stuck in time for these past 35 years. In Wonder Woman Unbound: The Curious History of the World’s Most Famous Heroine, comic book historian Tim Hanley looks back at the 1940s origins of the Amazonian as well as how the character has evolved in response to changes in American society since the 1950s. While some claim Wonder Woman as a feminist icon, others label her a feminist failure. After reading Hanley’s “curious history,” you’ll find it harder to fall back on the easy labels and see that Wonder Woman’s a little bit of both.

Hanley’s the perfect writer to tackle the star-spangled siren of the comic book. His blog, Straitened Circumstances, discusses not only Wonder Woman, but also women in comics in general. On Bleeding Cool.com, Hanley’s monthly column “Gendercrunching” challenges the comics industry and readership to focus on the gender bias still plaguing the medium, sometimes even crunching the numbers on plot lines and women writers and artists to makes his case even clearer—a statistical bent he also uses to great effect in his book. With his close, academic readings of the comics, Hanley achieves his goal of “rediscovering the forgotten history of Wonder Woman” and, therefore, “understand[ing] her journey to her current iconic status and flesh[ing] out Wonder Woman as a character and not just a symbol.”

Hanley’s curiosity over Wonder Woman’s curious career begins with her curious creator, writer and psychologist William Moulton Marston. Marston “wanted to impart to his readers a specific message about female superiority,” Hanley writes. Marston’s feminism didn’t hold that men and women were equal. Instead, he believed that women were superior and could bring about a more just and peaceful society than what men had achieved so far, especially in the midst of World War II. Wonder Woman’s women-only homeland of Themyscira thus became a utopian ideal. In the context of wartime America, Wonder Woman became “a superpowered Rosie the Riveter, constantly encouraging women to join the auxiliary forces or get a wartime job,” Hanley argues. While Wonder Woman inspired women to realize their full potential, she also prepared young boys reading the comics for the coming matriarchy, which Marston was devoutly believed would come after the war.

To illustrate the inevitable matriarchal utopia, Marston created what Hanley calls an “inverted world” in which, instead of being the damsel in distress, Wonder Woman rescues the main male figure, Steve Trevor. Wonder Woman continually rebuffs Steve’s advances, casting aside the idea that all women want is a husband and children. Even Wonder Woman’s secret identity as Diana Prince becomes a “critique” of the “good girl” stereotype of other comics. Hanley beautifully contrasts Wonder Woman/Diana Prince with the early relationship between Lois Lane and super-jerk Superman, who tormented and belittled Lois purely for her gender. Diana Prince’s put-on frailty before the amazingly inept Steve Trevor thus becomes Wonder Woman’s “performance art” in which she accentuates the stereotype to reveal its absurdity.

Marston’s “worldview was unique, remarkably progressive, and all of his theories were channeled into his creation,” Hanley praises the creator of Wonder Woman, adding that Marston’s stories “still stand up as strikingly feminist seventy years later, even compared to modern comic books and female characters in today’s books, TV shows, and movies.” Alas, Marston’s worldview came with complications, particularly a connoisseur’s eye for bondage, which went far beyond just the heroine’s “golden lasso of truth.” “For Marston,” Hanley defends, “bondage was about submission, not just sexually but in every aspect of life.” For the female utopia to happen, men must submit control, but everyone must submit individual desires to the greater goals of society. Bondage became a frequent symbol of that necessary system of submission, one that still bothers people looking for a feminist visionary in Marston and a feminist icon in Wonder Woman. Hanley believes that Marston’s feminism and fetishes are inseparable. “To state that this fetishism invalidated Wonder Woman’s feminism, one would have to ignore the undeniably unique and progressive elements of the character,” Hanley concludes. “Both approaches [i.e., choosing just one side of Marston’s world] are wrong; Wonder Woman was feminist and fetishist.”

As complicated as Wonder Woman’s feminist message was, you would expect that the climate would become more rather than less receptive after the 1940s. However, feminism and Wonder Woman took a step back in the 1950s, with Wonder Woman’s regression due in part to the death of Marston in 1947. “As years passed, new creators further convoluted the character, muddying her odd yet feminist origin,” Hanley writes. “While American women grew from complacent housewives to protestors for women’s liberation, gaining new strength and independence as they moved forward, Wonder Woman fell backward.” Psychiatrist Fredric Wertham, author of the 1954 book Seduction of the Innocent that led to the Comics Code Authority that had a chilling effect on comics and comic sales, charged Wonder Woman with corrupting youth through lesbianism (a charge that Hanley gives a full and serious examination in the context of modern attitudes). The CCA forced Wonder Woman (and all comics) into an age of silliness and strict conformity to gender stereotypes that lasted until the late 1960s, when, in the wake of Marvel Comics’ success with more realistic superhero storylines, DC Comics decided to follow suit. “More realistic” for Wonder Woman meant giving up her powers, living as Diana Prince, and centering her life around Steve Trevor. “The depowered Wonder Woman was one of DC Comics’ first attempts to respond to the new tone of the 1960s comic book industry,” Hanley recounts, “and it failed spectacularly.” Focused more on mod fashions and the affections of Steve, Wonder Woman had become a feminist failure.

In the 1970s, however, as liberal feminism fought for women’s rights, Wonder Woman resurfaced as a feminist hero. Ms. Magazine co-founder Gloria Steinem oversaw the July 1972 issue featuring Wonder Woman on the cover (and nominating her for president!). Hanley sees liberal feminism failing Marston’s original vision by calling for equality between men and women rather than a world in which women are superior. Likewise, the Lynda Carter television show of the second half of the 1970s continually emphasized Wonder Woman’s exceptionalism, her uniqueness unattainable for other women. Beauty queen Lynda Carter visually reinforced Wonder Woman’s problematic power, which was essentially the opposite of Marston’s original dream of every woman holding the potential of being a Wonder Woman, if only given the chance.

As Hanley points out near the end of his book, Wonder Woman’s the superhero everyone knows but knows nothing really about. When Batman or Superman died, it made the mainstream news, while Wonder Woman’s died twice in that same span with little notice. “The blank slate Wonder Woman of today is an icon,” Hanley concludes, “but by focusing on only that, her history and humanity are lost.” Rather than praise Wonder Woman as feminist icon or damn her as feminist failure, perhaps it’s finally time to allow her to exist as a character full of fascinating contradictions and capable of raising important questions. “Wonder Woman has so many facets and incarnations, and within them lies a character who is both bizarre and brilliant,” Hanley says. “To forget her past is to miss what makes Wonder Woman such a great hero.” The battle of the sexes goes back to the beginning of time, but Wonder Woman’s played her part, however problematically, for seven decades now and won’t go down without a fight.

[Many thanks to Chicago Review Press for providing me with a review copy of Tim Hanley’s Wonder Woman Unbound: The Curious History of the World’s Most Famous Heroine.]