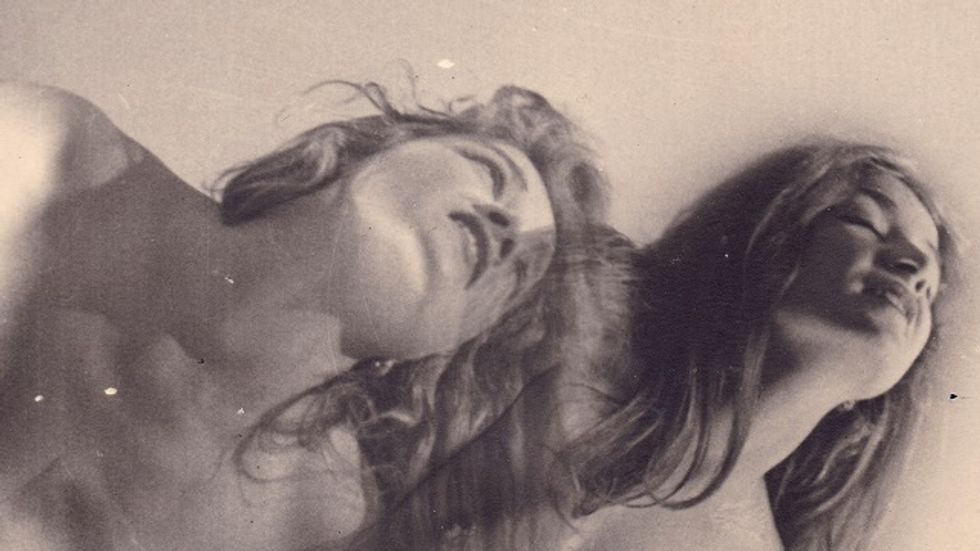 Photographer Ansel Adams, whose beautiful black and white landscapes full of mountains still grace both museum and office walls, called fellow photographer William Mortensen “the anti-Christ” for what he did to the art of photography. Mortensen inspired a great passion in his near-contemporary Adams thanks to the Pictorialism of his images, whose illusions and painterly gestures offered a devilish alternative to Adams’ “straight,” realistic photography. In the exhibition William Mortensen: American Grotesque, which runs through November 30, 2014 at Stephen Romano Gallery, Brooklyn, NY, Ansel Adams worst nightmare comes true, as his personal “anti-Christ” rises from the grave of unfair neglect to collect fresh converts to the eerie beauty of his decades-before-their-time artistry.

Mortensen’s path to becoming the “father of Pictorialism” in American photography began with his training as a painter at The Art Student’s League in New York after serving in World War I. In 1920, Mortensen traveled to Greece, Italy, Egypt, and Constantinople to see the old world as well as the Old Masters, who would be a lasting influence on and ideal of his photography. Upon his return, a friend asked him to escort his teenage sister to Hollywood and, she hoped, a career in the movies. That friend’s sister was Fay Wray, who after a decade of bit parts found lasting fame as the object of King Kong’s affections in 1933. Mortensen initially found work as a gardener in Hollywood before a chance encounter with director Cecil B. DeMille led to a job in the studios.

Mortensen quickly rose in the ranks from set mask maker (examples of which appear in the exhibition) to still photographer of DeMille’s epics. While other still photographers would wait until the shooting stopped and ask the actors to restage the scene, Mortensen took his photographs during the shooting, capturing the sense of movement amidst epic proportions of such movies as DeMille’s 1927 film The King of Kings. DeMille’s sprawling, prop-laden sets became Mortensen’s playground as he experimented with his still camera to create his earliest photographs full of fantasy and fantastic beauty.

With the portraitist approach of the Old Masters in mind, Mortensen began taking portraits of the elite of early Hollywood: Norma Shearer, Rudolph Valentino, Clara Bow, Marlene Dietrich, and others. Vanity Fair published many of Mortensen’s glamour shots of the stars, making him a key cog in the mythologizing machine of the movie industry. In many ways, Mortensen’s career parallels the history of the silent film as his Pictorialism perfectly matched the romanticism and fantasy that dominated movies of the 1920s. As an old documentary on Mortensen suggests, the heights of the macabre in many 1920s films, as epitomized by director Tod Browning’s work with legendary horror actor Lon Chaney, may have inspired the grotesque images Mortensen staged with costumes and makeup.

Similarly, the sexual freedom of 1920s Pre-Code Hollywood found its way into Mortensen’s nudes, many of which incorporated in tandem elements of the macabre. Mortensen’s Untitled (detail shown above) photo of two nude women from 1926 or 1927 from his series "A Pictorial Compendium of Witchcraft" exemplifies this still startlingly fresh but then deeply controversial aspect of Mortensen’s work. The models in these images seem as modern as anything in contemporary advertising, yet this exhibition comes on the half century anniversary of Mortensen’s death. What today’s photographers do through digital manipulation, Mortensen pioneered with texture screens and other hands-on techniques in the darkroom.

Truly before his time in technique as well as subject matter, despite being deeply steeped in art history, Mortensen shocked many with these highly sexual, occult photographs. Among the shocked were Fay Wray’s mother, who upon a visit in 1931 to Mortensen’s studio in Hollywood saw these nudes (some of which may have included Fay herself). When Mrs. Wray vowed to drag her daughter back to the safety and morality of Utah as King Kong was in mid-production, studio executives kept their leading lady in Hollywood by giving in to Mrs. Wray’s demand for Mortensen to be fired. Severed from Hollywood, Mortensen slipped into obscurity, now rejected both by the film industry and the photographic community led by Adams and other anti-Pictorialists. In 1936, Mortensen staged a photo simply titled L’Amour in which an amorous ape drools over a helpless, half-naked woman stretched on the ground before him—a King Kong in miniature and perhaps a personally defiant gesture towards Hollywood, Mrs. Wray, and all those who Puritanically rejected his work while hypocritically profiting from the combination of sex and violence that survived the Hays Code.

Despite these setbacks, Mortensen continued to take his type of pictures and even opened up his own school of photography, which drew in thousands of students—amateurs and professionals—over the years, mostly through the beguiling power of his photographs. Unfortunately, lasting damage had been done. As A.D. Coleman writes in his introduction to the exhibition’s catalog, “Anathematized, ostracized, and eventually purged from the dominant narratives of 20th-century photography due to the biases of a small but influential cluster of historians, curators, and photographers, Mortensen plunged into an obscurity so deep that by 1980 most considered him unworthy of even a footnote.” Factoring in Mortensen’s own uncompromising ruthlessness that drove him to take a razor to any photograph below his exacting standards and, as Coleman puts it “the apparently haphazard dispersal of his archive… scattered and, for the most part, presumed lost,” William Mortensen: American Grotesque emerges not only as a valuable correction to an unjust error, but also a miraculous resurrection from the critical graveyard.

In 1932, Mortensen titled a photograph Human Relations. It shows a bejeweled arm reaching up and gouging out the eyes from a defenseless head. “Hatred is frequently the emotion that lies behind grotesque art,” Mortensen later said of this possible self-portrait. Referring to the Great Depression then ravaging America when he made that image, Mortensen continued, “These were the days when stocks were stopping dividends, when lives of thrift and industry were being wiped out by the foreclosing of mortgages and the closing of banks… Everywhere there was the spirit of ‘Take what you can, and to hell with your neighbor.’ Those who were strong seemed to be, in sheer wantonness, gouging the eyes of humanity.” Ansel Adams, Hollywood, and other power players stuck a finger in Mortensen’s artistic eye long ago, but now, 50 years after his death, William Mortensen: American Grotesque challenges us to open our eyes to an artist whose honesty and humanity allowed him to picture a dark and ugly side of life inseparable from its beauty that others refused to acknowledge.

[Many thanks to Stephen Romano Gallery, Brooklyn, NY, for providing me with the image above and other press materials related to the exhibition, William Mortensen: American Grotesque, which runs through November 30, 2014.]